Relievers don’t always have a glamorous job, and fans tend to remember their periodic blow-ups more than string of perfect innings. Perhaps it’s why Reds reliever Amir Garrett still flies under the radar.

Nobody has ever doubted Garrett’s raw stuff, especially once he made the switch from basketball to baseball full-time. He was routinely found atop the Reds’ top prospect lists coming through the farm system. In 2016, he was the organization’s minor-league pitcher of the year. After hitting a speed bump in his first big-league season due to an ailing hip, he found his footing as a reliever in 2018.

That switch has helped his stuff pop. His fastball can touch 98 mph, a somewhat rare trait for a left-hander even today’s game. Behind that heat, Garrett is off to a hot start on the mound, much like he was last season. Through his first 6 2/3 innings, he’s allowed only one run, four hits, and two walks. Most impressively, he has 10 strikeouts — good for a rate of 38.5%. Fastball velocity is just the tip of the iceberg, however.

Garrett’s most powerful weapon is the slider. It’s not quite at fully armed and operational Death Star or Luis Castillo changeup levels, but it’s not far off.

Among 121 relievers who’ve thrown the pitch 25 or more times this season, only Victor Arano and Edwin Diaz have a higher rate of swings and misses than Garrett (33.0%). This isn’t a small-sample size development, either. His slider also had a high SwStr% in 2018, putting him in the same company as some of the game’s best relievers.

When looking at the whiff rate on sliders swung at, Garrett fares even better among this group. At 53.9% last year, he trailed only Williams, Leclerc, Pressly, Scott, and Hader. He’s also among the best relievers at getting his opponents to expand the strike zone on the slider. Garrett is maintaining a 38.8% chase rate on the pitch over the last two seasons, according to MLB Gameday’s standard strike zone. That ranks eighth among all relievers.

Hitters do next to nothing with the pitch when they make contact on Garrett’s slider. Here’s where he stands since the start of the 2018 season among 160 pitchers with at least 300 sliders (this includes starters):

OMG is right, Amir. That’s pure dominance against hitters on both sides of the plate and keeps him from being pigeonholed into the LOOGY role.

The pitch doesn’t have a particularly sharp bite like a Chaz Roe slider, nor does it dramatically fall off the table. His slider consistently ranks low in both horizontal and vertical movement among left-handed relievers. The pitch has more of a sweeping motion across the plate as it continues to move away from or toward the hitter. The pitch has enough late break, though, to make it devastating for hitters on both sides of the plate. As you can see in the video, Pablo Reyes was way out in front of the pitch and swung over it, as he likely believed a fastball was coming right for the heart of the plate.

Movement isn’t the only important part of a slider, of course. A large part of pitching is changing speeds, and Garrett’s slider is 10.3 mph slower than his four-seam fastball on average. If hitters believe it’s a fastball out of Garrett’s hand, it disrupts their timing and they swing too early. This velocity differential is higher than the average reliever’s over the last 10 years (9.6 mph).

As discussed last week when dissecting Robert Stephenson’s changes in 2019, spin also plays a factor in the slider’s effectiveness. In Stephenson’s case, he has a high spin rate that he converts into a nice amount of movement. Garrett’s slider does the opposite. It has well below average spin. In fact, Garrett has the lowest spin rate on his slider among all pitchers who’ve thrown it at least 300 times the last two seasons. While it seems counter-intuitive to think a low spin rate is a positive, it can be a good thing.

Generally, a pitch with a low spin rate will drop more than one with average rotation. It won’t necessarily have sharp, noticeable movement, but it can make hitters swing over top of the ball. Consider that the average spin rate on a slider since the launch of Statcast is 2,309 rpm. Pitches on the low and high end get a lot of swings and misses. Those in the middle get fewer.

As we can see, a high spin slider results in the most whiffs per swing, but a low spin is still better than an average one (data dates back to 2015):

You can see a bit of a bell curve forming with whiff rates as spin rate changes. Pitchers are more likely to carry a high whiff rate when they have more spin, but they can make it happen with low spin as well. As PRP Baseball explains:

“A slider from a low ¾ slot with low spin and efficiency will feature more depth from the gyrospin which can produce a high swing and miss rate.”

To put this in layman’s terms: the low-spin slider won’t have a lot of sharp, sudden movement (meaning it has more gyrospin), but it will still change vertical planes as it approaches the better. That means if the hitter starts their swing on X plane and the ball continues dropping to Y plane, they’re more likely to miss the ball. It’s very difficult for a hitter to change the plane of their swing once it starts. This is also why sinkers should have low spin. Hitters are more likely to hit the top of the ball, driving it into the ground when they make contact. When you factor in that sliders often look like fastballs but are actually 10 mph slower on average, you can see why the slider gets more whiffs than a sinker even without tremendous movement.

We can see in the video above that Garrett has a three-quarter arm slot. With Statcast data, we can also see that he has an arm slot slightly below league average on his slider. Despite being tall at 6-foot-6, his vertical release point (5.69 ft) is lower than league average for left-handed pitchers (5.80 ft). We can also make a reasonable guess that Garrett has a low spin efficiency on his slider due to the lack of significant horizontal or vertical movement. While this isn’t the perfect answer given the limited data available, we have a little more insight into why his slider misses so many bats.

As a reliever, Garrett been able to feature his slider heavily. Its usage took a huge leap last year and is up so far this year, too. 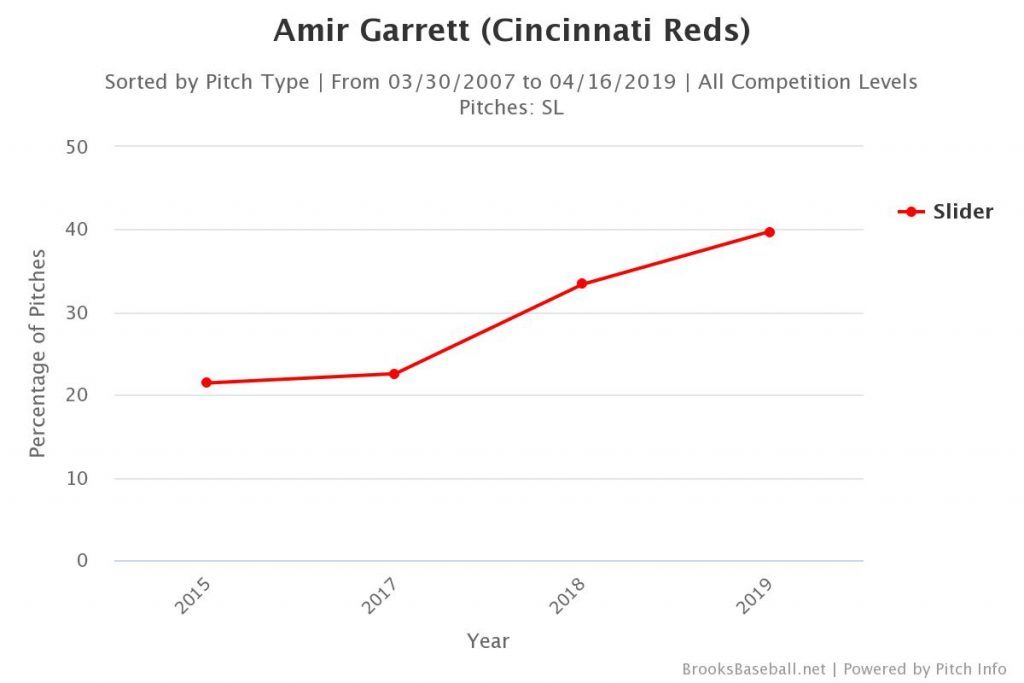 With this devastating breaking pitch and mid-90s heat on his fastball, look for him to continue seeing high-leverage situations as the season goes on.

Photo Credit: Hayden Schiff. Licensing for the photo can be found here.