Tyler Mahle struggled early and the Reds trailed 4-0 after two innings. That would be more than enough for Kenta Madeda and the Dodgers as the Reds offense could never get anything going tonight. The Reds have now lost 3 straight games immediately following their four game win streak. 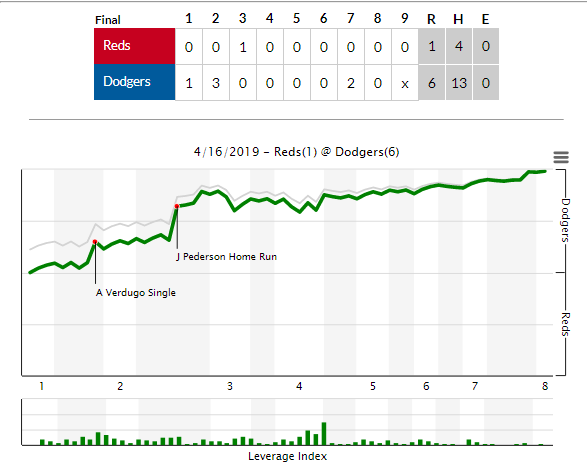 According to Fangraphs WPA statistic (winning percentage added), the most important play of the game was Tyler Mahle allowing a 2-run home run to Joc Pederson with 2 outs in the 2nd inning, giving the Dodgers a 3-0 lead. That play decreased the Reds chances of winning by 16.5% (from 34.3% to 17.8%).

Derek Dietrich drew two walks tonight. He only had one walk through his first 34 PA of the season. He also had a 10 pitch AB in the 9th inning.

Jared Hughes pitched a perfect inning, striking out 2 batters. He entered tonight with an 8.10 ERA, so that was good to see.

Tyler Mahle gave up a career high 11 hits. He was not fooling anyone early and consistently fell behind in the count. Mahle did settle down and got through 6 innings. He impressively did not walk anyone all night despite some command issues.

Jose Peraza continues to look lost at the plate. He went 0-4 and is now hitting .154/.170/.231. Peraza entered today seeing 3.22 pitches per PA, which is the 3rd worst in the MLB. I don’t want to give up on Peraza because he had a really poor start last year, but if he doesn’t start turning it around the Reds might need to bench him vs RHP in favor of Iglesias at SS and Dietrich at 2B.

Zach Duke struggled again as he allowed 2 runs. Duke continues to fall behind in the count and is getting burned because of it.

I have been a big fan of David Bell and his analytic approach this season, but there was one move tonight that I thought was absolutely bizarre. The Reds had the bases loaded in the top of the 4th inning with two outs and Mahle due up. Bell has been known for his quick hook early, but for some reason he allowed Mahle to hit for himself. That would end up being the Reds only real chance to get back in the game.