Luis Castillo has been the best of the Reds starters, there’s no question about that, and Sonny Gray has probably taken second place despite his first start stumbles. But Tyler Mahle — you know, the guy supposed to start the year in AAA as the rotation’s sixth man — has easily been the third best.

Now, things change quickly and easily in the world of baseball. By the time Alex Wood is ready to come off the injured list — mid-May according to reports — Mahle could have fallen off the wagon or one of Anthony DeSclafani or Tanner Roark could have put it together. But for the moment, Tyler Mahle deserves a full season in the Reds rotation, full stop.

The question becomes: Who does Tyler Mahle replace?

Option 1: Tanner Roark to the pen

I’ll be upfront: I don’t think this is the best idea. Sending Tanner Roark to the pen assumes that Roark is a worse pitcher than Anthony DeSclafani. Statistically, that assumption does not hold up.

As you can see, Roark performs better than DeSclafani both overall and late into games. If DeSclafani had better numbers the third time through the order than Roark did, I could understand moving the latter to the pen and not the former, but it’s not the case. Tanner Roark may not have an outstanding skill set that get him into commercials and sell his jersey, but he does get outs.

If you’d rather a different metric than OPS, then Roark has a lower home run rate, an identical walk rate, and a slightly lower strikeout rate than DeSclafani for his career. He has a better career FIP and ERA than DeSclafani in more than double the innings pitched.

And Roark has been better in 2019. Through each of their three starts so far, Roark has clearly outperformed DeSclafani, accumulating 0.4 fWAR to Disco’s -0.1. Moving Tanner Roark to the pen would be like fixing gangrene in your left wrist by amputating your entire arm. Could work, but also why be so extreme?

Option 2: Anthony DeSclafani to the minors

Since we’ve established that Disco is the odd man out in the rotation if Tyler Mahle has earned his spot, down he should go. DeSclafani still has two minor league options, so a demotion would cost the Reds nothing.

Where DeSclafani has run into trouble so far this year has been with long balls. He’s served up four in 13.1 innings, double the rest of the Reds starters combined mark. Even in 51.1 innings, the bullpen has only allowed five home runs.

All four of Disco’s long balls have come against his fastball, which, as the graph below shows, he’s been leaving up. 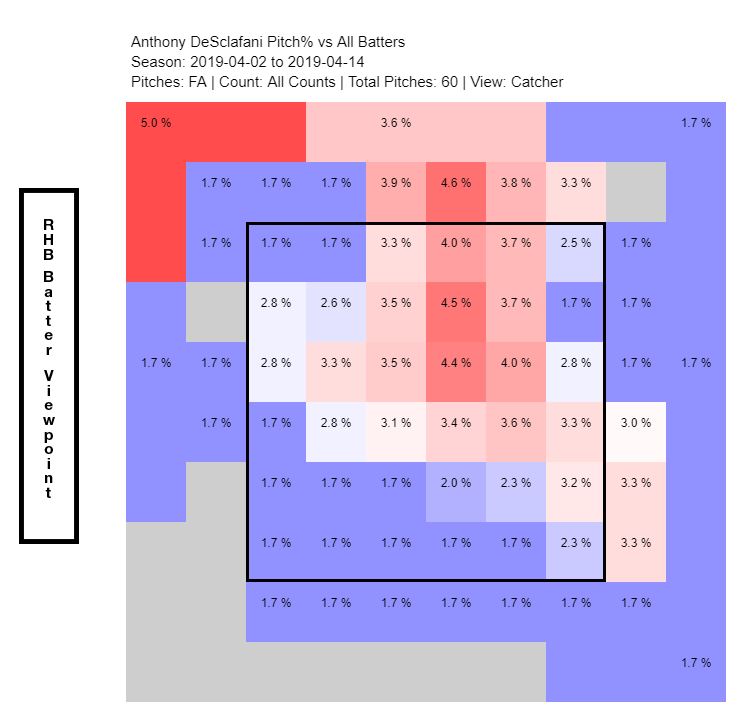 When DeSclafani had success in 2015 and 2016, his fastballs lived down and away from right-handed batters, rarely coming near the top of the zone. Until DeSclafani can wrangle his fastball back toward the bottom of the zone, he’ll be letting up long balls for a while.

With a demotion, Disco becomes the new Tyler Mahle. Now, he’s the sixth man up if someone goes down or the rotation needs an extra of rest or whatever else can happen over the course of a long baseball season. Of course, this seems like the most logical course of action. Let DeSclafani figure out whatever has been hindering him. Unless…

There’s no urgency to shed pitching and the Reds don’t have a glaringly obvious area of need just yet, but Disco does hold a good deal more trade value than Tanner Roark does. For one, he has two seasons of team control left compared to Roark who’s a free agent at the end of the season. And second, DeSclafani is three years younger than Roark, making him more attractive for a potential resigning.

Now if this option does come to pass, don’t expect the Reds to get anyone of true value in return. A low-A flyer prospect potentially or perhaps a fringe major leaguer who could turn into something. While an extra year of team control is something, it’s not much for a player with Disco’s injury history. Also, just a section ago I recommended he be sent down to the minors, which is not something another team wants said about a potential trade target.

Of course, this entire exercise depends on Tyler Mahle maintaining his excellent performance. So far the stats are in his favor. His fastball has gained a tick, he’s living in the part of the zone that Disco has had trouble finding, and he’s upped his groundball percentage considerably.

But that’s just 11.0 innings. So much can happen in the next month before Wood comes back. But if somehow everything just stays the same? Well, Tyler Mahle might just be the next Reds ace.