After 3 runs in the first inning, the starting pitchers settled down and produced the duel we were all expecting. The Reds took an early lead as Yasiel Puig homered off of Clayton Kershaw in his first at-bat as an opponent in Los Angeles. Luis Castillo battled against a potent Dodgers offense and the Reds bullpen pitched beautifully until the 9th inning as Joc Pederson crushed a Raisel Iglesias hanging breaking ball to steal a victory from the good guys.

Castillo was working hard straight from the get-go. He went to 3-0 counts against Joc Pederson (walk) and Justin Turner (single) before giving up a double to Cody Bellinger to put the Dodgers on the board. He did come back and strike out A.J. Pollock and Max Muncy to end the inning, so good job by Luis to limit the damage.

Castillo ran into more trouble in the third after issuing a walk to Justin Turner and then hitting Bellinger square in the knee with a 95-mph fastball. It was very similar to Ryan Madson’s pitch that hit Joey Votto last year. Castillo was noticeably upset at himself for potentially injuring Bellinger, who stayed in the game at the time (he was removed after the inning). Castillo then struck out Pollock and Muncy back-to-back for the second time in a row to end the inning.

After a 1-2-3 4th inning for Castillo, he ran into his biggest jam of the night in the 5th after singles by Pederson and Turner and a walk to Alex Verdugo to load the bases. Castillo then walked Pollock to tie the score at 2-2, but got out of the jam with Max Muncy’s third strikeout and a Kike Hernandez flyout. More damage control in a key situation to keep the Reds in the game.

Michael Lorenzen and Wandy Peralta pitched the 6th, allowing one runner on an error by Kyle Farmer. Peralta threw two very nice sliders to strike out Corey Seager after falling behind 3-1. Robert Stephenson came on to pitch the 7th and 8th and retired all six batters he faced, including two strikeouts to end the 8th, accumulating 0.182 WPA, good for his 4th best game ever.

The Reds offense went quiet after the first inning fireworks. Kershaw did not allow a baserunner again until a Matt Kemp single in the 4th. Jose Peraza grounded into a fielder’s choice and was then picked off stealing second. A leadoff single by Jose Iglesias in the 5th was squandered by a Scott Schebler double play.

After a 1-2-3 8th, Curt Casali popped a double to the right field gap off of Kenley Jansen to start the 9th inning. After a Suarez strikeout and a Puig flyout to advance the runner, former-Dodger Matt Kemp delivered the goods with a bloop single to right to give the Reds the lead.

It is no secret that Yasiel Puig has struggled the being the year, but the first inning blast off of Kershaw back in L.A. was a great moment in this young season. Puig has now homered in back-to-back games, and while his wRC+ is still a mere 56, a hot steak on this road trip would help Reds fans forget all about his slow start.

Luis Castillo had his swing-and-miss stuff tonight with a swinging strike rate (15.3%) just under his performance so far this year (16.7%), led by his changeup and a good outing for his slider as well. On the other hand, he also allowed five walks and hit a batter, bringing his BB/9 up to 4.74 this year, well above league average of 3.53. Some credit is due to the Dodgers strong plate discipline (11.3% walk-rate, 3rd in MLB), but Castillo could have been sharper. Still, a solid overall performance that should continue to encourage Reds fans about his future.

Robert Stephenson looks like a completely different pitcher so far this year. I agree with those in Reds Country calling for Stephenson to pitch in higher leverage situations. He delivered nicely tonight and now has 12 Ks and 1 BB in 9.1 innings so far this year.

bah god, this is the Bob Steve we've dreamed about for 5 years.

"Future Closer Bob Son of Steve" does have a pretty nice ring to it.

Who else but the other former Dodger to punch home the go-ahead run off of Jansen in the 9th inning. Matt Kemp has had an even rougher start to the season than Puig (current wRC+ is up to 17). It will be interesting to see what happens to his playing time when Nick Senzel returns.

I know it is early, but Raisel’s current FIP/xFIP is 6.90/5.22, continuing a downward trend that lasted nearly all of 2018. He is allowing more hard contact and more home runs than he ever did during 2015-2017. I am not sure what the root problem is, but Iglesias clearly is not the same pitcher we are used to seeing. 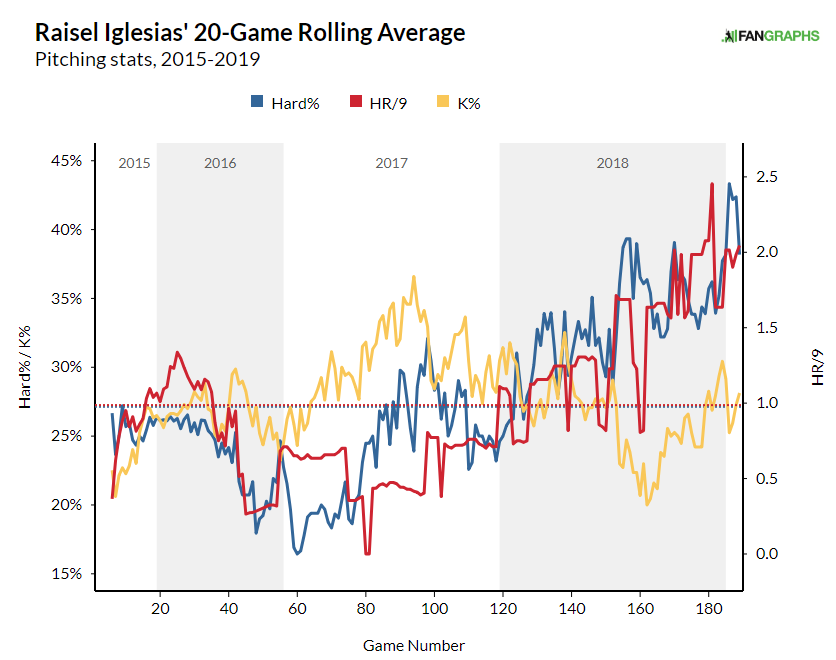 In honor of Castillo’s bizarre play, another baseball play that I had never seen before

You guys know that saying "you see something new at the ballpark everyday"?

This is that something new… pic.twitter.com/mLdhQQdQrn

The Reds and Dodgers are back at it for more #latenightbaseball tomorrow at 10:10pm EST. Tyler Mahle and Kenta Maeda are the probable starting pitchers.