Anthony DeSclafani got hit hard for a second straight start, and the Reds found themselves trailing 4-0 after the first inning. The Reds tied the game up in the fifth inning on a Jesse Winker three-run blast. However, the Reds bullpen couldn’t get it done today as Garrett and Hughes each gave up homers and Duke walked in a run. 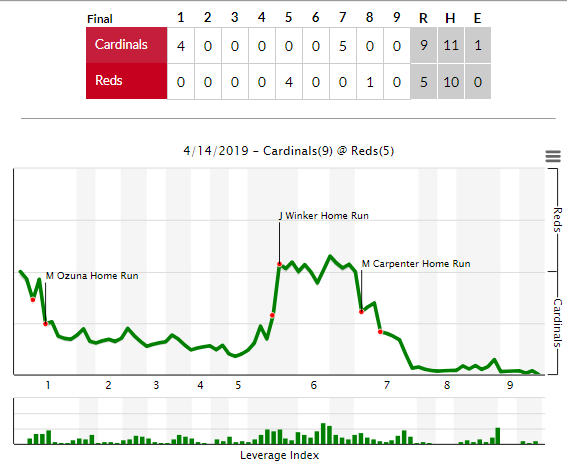 According to Fangraphs WPA statistic (winning percentage added), the most important play of the game was Jesse Winker’s 3-run home run with 1 out in the 5th inning, tying the game at 4. That play increased the Reds chances of winning by 24.9% (from 28.8% to 53.6%). It was the biggest swing of the game despite the Reds not winning today. That does not happen too often.

Jesse Winker continues to destroy baseballs. Winker hit his 4th home run of the season, and it was a big 3-run, game tying opposite field blast. He is showing some impressive power early in 2019 with 4 HR through the first 14 games. Winker didn’t hit his 4th HR last year until June 22nd (his 74th game of 2018).

Matt Kemp had just his 4th plate appearance of the season against a LHP in a pinch-hit appearance against Andrew Miller. He singled and is now 2-4 vs LHP. It will be interesting to see how he does against a bunch of lefties coming up. That is his strength and where the Reds really need him.

Another perfect inning today for Robert Stephenson. He struck out two batters and his season numbers are now: 7.1 IP, 3 H, 1 ER, 1 BB, 10 K. It might be time for Bob Steve to get some high leverage chances. It has been awesome to see him resurrect his career so far in this early season.

Michael Lorenzen had an RBI single and pitched two scoreless innings. Lorenzen had been struggling a bit on the pitching side of the field, so it was great to see him pitch well today.

Anthony DeSclafani got rocked for a second straight start. The last start, you cut him some slack because the Pirates did most of their damage after the “fight” and that understandably could have thrown him off his game. Disco had a 32 pitch first inning where he allowed two no-doubt home runs. He has a 7.43 ERA/6.45 FIP through his first 3 starts of 2019.

Amir Garrett and Jared Hughes both gave up homers. It wasn’t a great day for the Reds bullpen.

Jared Hughes was charged with 4 runs in an outing for the first time since 7/26/17 for Mil at Wsh.

Derek Dietrich had to leave the game after getting hit by a pitch on the leg. It wasn’t just some silly precautionary reason either as the Reds had no one left on the bench and Tyler Mahle had to run. You have to hope he doesn’t have to miss any time because he has been such a huge part of this offense.

Zach Duke walked in a run today. Duke has struggled in his first couple weeks with the Reds. I saw a lot folks saying the Reds should “DFA” Duke. He had a 3.01 FIP last year and lefties had a .602 OPS against him. The Reds cutting him after 4.1 innings and throwing away $2 million would be pretty silly. It’s a long season, you just can’t cut guys because of a slow start. Bell should probably use him in some lower leverage situations for a while and see if he can get going.

All in all, this was a really nice week for the Redlegs. I think every single one of us would have taken a 4-1 week after the disastrous 1-8 start. The Reds will have a tough week coming up, with 7 games in California against the Dodgers and first place Padres. It doesn’t get easier after that as they’ll come home against the Braves, and then have road series’ against the Cardinals and Mets to close out April. This will be a big stretch for the Reds and actually could end up defining the season.