Can I feel all good now about the Reds? Have the flying monkeys been recalled? Were the AAAA Miami Marlins just the tonic needed to get the offense going? Or must I still suspect that David Bell might be in over his head? Does lineup construction remain a bone of contention or can I live with the occasional Scott Schebler at the top of the batting order? Are the new coaches and their iPads drowning the players in numbers? The Florida Men gave a respite from worry, but, hey, there’s 150 potential nightmares to go.

I want to believe. As bad as Luis Castillo was at the beginning of last season, he’s been just that good so far. Tyler Mahle has picked up the ball left on the mound by Alex Wood and delivered strikes and hope. Even Robert Stephenson has rediscovered home plate and bought himself some time. So far, we’ve #GotThePitching. But, one series does not a turnaround make. If I cannot allow this team to continue to stumble and grow as they build their way back into relevance in the National League Central, I know who—or rather what—is to blame:

Stay with me. My iPhone is the culprit and after I finish writing this, I promise, doggone it, I’m hurling it into the Hudson River. It’s gone wrong and my long commute has given me time to pause. To reflect. To center myself again. You see, as I make my way to work each morning, I no longer have to wait in line for my coffee at the crowded Starbucks on 53rd and Third. I make a mobile order with an app on my iPhone from deep inside the subway all the way on the other side of midtown Manhattan. By the time I reach the front door— voilà —my venti-almond-milk-half-double-decaffeinated-half-caff with a twist of lemon awaits. I hardly break stride.

I don’t mean to be smug here, but, come on, only a schmuck waits in line these days. Why stand in a long queue for movie tickets when I have Fandango and Flixster to do the heavy lifting for me? I get my boarding passes delivered to my phone while I’m riding in a car (that I ordered with my Uber app, by the way) in route to the airport.

Grocery shopping? Pffft. Fresh Direct delivers those Little Debbies straight to my front door. Think I’m going to spend my valuable time at the mall searching for a parking space when Amazon and QVC do my shopping for me from my couch? Fuggedddaboutit. And why would I waste my time printing out PDF tickets for some game I bought on SeatGeek last month? I have an electronic wallet for that.

So, why am I being asked to wait for the Reds to prove that they have definitively turned this thing around? Me and Veruca Salt want some answers and we want them now!

The Reds scored a bushel and a peck of runs against the Miami Marlins and that once anemic-looking offense now has a run differential of 7+. I like me some run differential because Run Differential is a simple stat devoid of all that complicated “divide by and square root of linear weights” stuff. It relies on the very simple metric of basic math: the difference between runs scored and runs allowed. Sure, you can make it still more accurate (and more complicated) by factoring in ballparks and all that. But here’s the thing: it turns out this offers a pretty good correlation of a team’s won/lost record over 162 games. Score one hundred runs more than your opponent over a season and you’re a playoff team.

I don’t need a beautiful mind to comprehend that.

Next to “all of a sudden,” the phrase I’m hearing the most on Fox Sports Ohio during Reds games is “trust the process.” Trust the Process is a familiar mantra these days that’s relevant whether you follow the Reds, a freshman-laden Kentucky basketball team, or the Philadelphia 76ers—any rebuilding club not named the New York Knicks. (Sorry, I’m a bitter man.)

Which leads me here. So much has gone into remaking the Reds, it’s hard to understand why there isn’t more patience with this process. Yes, the Reds have been mostly losing for the last two decades plus. We’re tired. I know. Still, at some point, all of us need to free ourselves from the shackles of the losing past and allow this new regime to show what they can do. Because we believe in this process, do we not?

Scott Schebler leading off may be maddening to some. Matt Kemp in the lineup may make the blood boil. Here’s the thing, tho: David Bell is building consensus and trust in his new clubhouse. Sometimes, that means showing guys that you believe in them. Or that, at least, you believe enough in them to let them show you what they can (or can’t) do before you assign them to ancillary roles for the rest of the season. I’m okay with that. You don’t have to be a happy clubhouse to be a winning clubhouse, but it helps. And if his players don’t believe in him, don’t trust him, don’t believe he has their best interests at heart—individually and collectively—David Bell and his coaches are going to have a hard time getting them to buy in to everything else they are selling.

There’s a lesson or two to be learned from events taking place in Chicago right now. Those always lovable Cubbies have had a start from hell, as well. Tom Ricketts’ team—which has a payroll of over $210M according to Spotrac, higher than the Dodgers and Yankees—started the season a woeful 1-6. Baseball Prospectus’s 3rd Order Wins Percentage has them in last place in the Central. Fans are already calling for the head of pitching coach Tommy Hottovy and blaming the owner for not climbing a step ladder to add more free agency dollar bills to an already bonfire of cash burning after the signings of underachievers Jason Heyward, Yu Darvish and Tyler Chatwood.

Will Leitch had some thoughts about drawing conclusions from the first fortnight of the season:

“The fun of watching baseball this early in the season is that you can convince yourself that the way everyone’s playing now is the way they’re going to be playing all season … It’s more joyous to imagine the hot start to a season isn’t a fluke, but instead the sign that the breakout season you were waiting for is finally upon us. Six games in the middle of the season, you don’t even notice. But six games to start the season become our new reality.”

The converse is also true:

“The Yankees are on pace to win 54 games. When you looked at the Yankees’ opening schedule and saw them leading off with Baltimore and Detroit at home, the last thing you imagined was them losing both series. The bats have gone silent, injuries are starting to pile up, and even the vaunted bullpen has sprung some leaks. The heat gets turned up in The Bronx faster every year.”

The paint is still drying on the canvas of that recent Renaissance masterpiece, Puig Against the World. 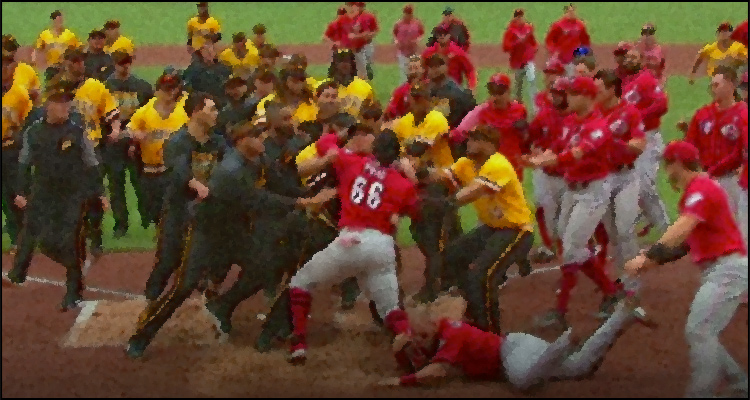 If it feels as if the image of Tucker Barnhart clinging to the leg of Yasiel Puig was metaphor for the Reds desperate hold on to the rest of the National League Central as April began, just remember this: it’s still only April. Early April at that. Which means if the Reds go into siesta time against the Cardinals this weekend, we shouldn’t fall back into panic mode again. Right?

Brian Kenny has a television bit he does on the MLB Network called “Small Sample Size Theatre.” Right now, the Reds are in Scene One, Act One of that play.

Then there’s this: Cincinnati has begun the season 1-8 for the sixth time. They’ve finished over .500 in 3 of those first 5.

So, all is not lost. Yes, a lousy start has put a real dent in the Reds’ chances of winning 95 games. But, they were never winning 95 games to begin with, if we are being honest with ourselves. There’s plenty of season left. All of it, in fact.

And if that sound you just heard is reminiscent of the splash of Derek Dietrich going yard into the Allegheny River outside PNC Park, that was my phone going “splash.”