The Reds would not have won last night’s game without Jose Iglesias.

Jose Iglesias is your Man of the Match. All the photos from tonight's 2-1 victory against the Marlins. #Reds https://t.co/4VMfeVQldZ pic.twitter.com/cysvY8RVRE

Which is good, because guess what, everybody (party horn emoji):

Caught up briefly with Scooter Gennett. He thinks 7 more weeks at least.

Two weeks until the next MRI, even. This is like driving from Cincinnati to Dayton and breaking through the downtown traffic only to join the hideously unscenic I75 traffic.

I was very glad for last night’s win, but it also created a creeping sense of unease. It made me That Girl. And I don’t like being That Girl, but… most of the runs this team is generating are from the longball. They’re making absolute WTF errors and decisions on the basepaths, with occasional fielding terribleness that would make my small nephew’s baseball coach drink. Last night was a win, but would it have been a win if the Reds were playing the Not-Marlins?

Well, now I need a smile. Here is my favorite current picture of Jesse Winker screaming into the dugout:

Solo shots from Jose Iglesias and Jesse Winker give the #Reds a 2-1 lead in the eighth. ?@ENQSports? pic.twitter.com/ZI96pfknDg

The Businessman’s Special begins at 12:35. 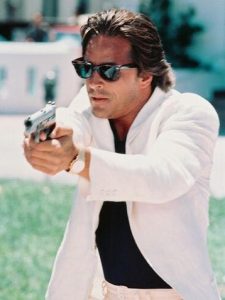 The Marlins have a guy named Pablo, but I don’t know what that means in terms of late twentieth-century crime dramas conducted in pastels.

Our Friend Yasiel returns, but pretty much only because he doesn’t want to talk to Joe Torre.

Yasiel Puig on why he didn’t appeal his 2-game suspension: “I don’t want to talk to Joe Torre again. … We’re going to be on the phone for two hours and nothing is going to work." #Reds https://t.co/oc65y4aSAO

Reds are the first team ever to start a season with 2 or fewer wins in their first 10 games while scoring more runs than they've allowed.

-The past two game threads have come to you from the road because I love you and I am a dedicated professional and none of the other writers would switch with me. Yesterday one of the airport restaurants was showing the stupid Yankees, which is why people now hate air travel.

Partly. I adored traveling when I was a little girl. Now I’d rather ship myself in a nailed-together, splintery crate because then at least I’m not subjected to a world tour of every upsetting form of leggings Forever XXI has to offer.