Robert Stephenson likely made the Reds’ Opening Day roster because he’s out of options. He’s sticking around based on merit.

It’s early — he’s faced only 20 batters — but the 26-year-old looks like a different pitcher in 2019. His stuff looks as filthy as ever. In 5 1/3 innings, Stephenson has struck out seven and allowed only three hits and one earned run. Most notably, though, he hasn’t issued a walk.

Control has long been a pain point for Stephenson, preventing him from becoming the No. 1 starter many envisioned. He held an 11.0% walk rate in the minor leagues, and that number only got worse in his first three years of major-league action (13.6%). The former first-round pick was so wild that it threatened his future with the Reds. Although he has swing-and-miss stuff, his inability to keep the ball over the plate made his peripherals (5.50 FIP, 5.33 xFIP) just as ugly as his ERA (5.47).

Even in Stephenson’s best stretches, the walks were problematic. In his impressive 10-game run to end 2017, his xFIP (4.68) was over two runs higher than his ERA (2.50). Other factors played a role, but walks were the primary reason. He struck out 24.1% of batters in that span but also walked 13.1%.

The problem came almost solely when Stephenson threw his fastball. Although he deliberately took velocity off of his heater as he climbed the minor-league ranks, it didn’t help. Stephenson also tried to simplify his delivery by ditching his wind-up and pitching exclusively from the stretch. No dice. Here’s a look at the heat map on his fastball from 2016 to 2018: 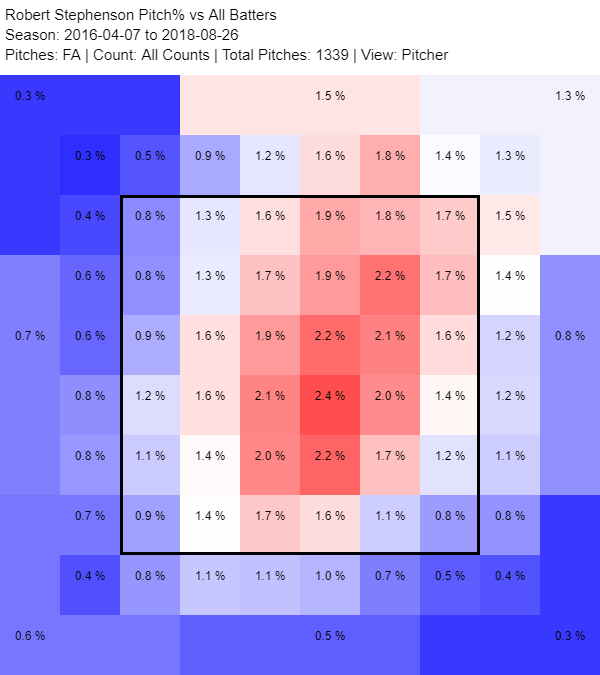 Stephenson consistently missed the plate high and to his arm side or left the ball in the heart of the zone. He seemingly didn’t know where the pitch was going in a lot of cases. Through 2018, only 48.7% of the fastballs he threw were in the strike zone. The league average in that span was 53.6%. A total of 273 pitchers threw at least 1,000 four-seamers in those three years. Stephenson’s Zone% ranked 254th.

That ranking isn’t everything, as some successful pitchers fell below him on that list, including Corey Kluber, Blake Snell, Masahiro Tanaka, Tanner Roark, and Lance McCullers Jr. Those pitchers generally have good command or an elite strikeout rate to make up for so-so control. For a pitcher like Tanaka, who has a career walk rate just north of 4%, it tells you many of those fastballs out of the strike zone were probably intentional waste pitches.

With Stephenson, that was clearly not the case. He threw the pitch 55.3% of the time between 2016 and 2018. When the pitch you throw over half the time hits the strike zone less than half the time, it’s a problem. Of the pitchers in the example above, four of them use their fastballs less than 40% of the time (Kluber, Tanaka, Roark, McCullers).The alarming part was that didn’t seem to bother Stephenson. Most Reds fans remember this infamous quote last season to the Courier Journal:

“Everyone always talks about the fastball command,” Stephenson said. “And I agree with that to an extent. Obviously, I’d like to limit the walk numbers, but at the same time, I don’t think that they are the most important things ever. If you can get guys out without them getting hits, then I don’t think that walks should be as big of a deal.”

Not only did Stephenson’s poor fastball command cause his issues with walks, but it led to missing his spots in the zone, too. And that usually means hard contact. The numbers on his fastball when put into play were ugly. You may want to look away for this part.

Between 2016 and ’18, Chris Young was the only pitcher with a worse xSLG or xwOBA on the four-seam fastball than Stephenson. Young and Anthony DeSclafani were the only pitchers to allow a higher slugging percentage. Nine pitchers allowed a higher batting average, and 23 allowed a higher average exit velocity. Six pitchers had a worse fastball pitch value, which is a cumulative stat. His fastball ranked that low despite throwing at least 87 fewer innings than every pitcher in front (behind?) him on the list aside from Young. Of his 23 career home runs allowed, 17 were on the four-seamer. It was simply a lousy pitch.

You’re excused if you thought Stephenson had no chance of making the Reds’ roster in 2018. His nasty off-speed pitches teased everyone, but they were almost rendered moot because of his fastball command. Despite a late start in spring training, he came in throwing strikes. He painted the corners with his fastball better than before. That has carried over into the regular season so far. Stephenson has thrown 20 of his 30 fastballs in the strike zone.

Yes, it’s a small sample size, but Stephenson looks undeniably different. He credits a new grip on his fastball for the improved command over the pitch.

“I had a regular ‘C’ grip that I was throwing my four-seam with,” Stephenson said. “Now I’m using a reverse ‘C’ that I feel like I can control it a little bit better. It seems to match up with my fingers better. I feel like I’m getting a little more ride out of the ball.”

It also helps that Stephenson added some extra velocity to his fastball coming out of the bullpen. He’s averaging just a tick under 95 mph with his four-seamer and has touched 96. He’s thrown as hard as 99 in the past, but 96 is nothing to sneeze at. Here, we can see his fastball velocity is creeping back up to where it was in his debut season: 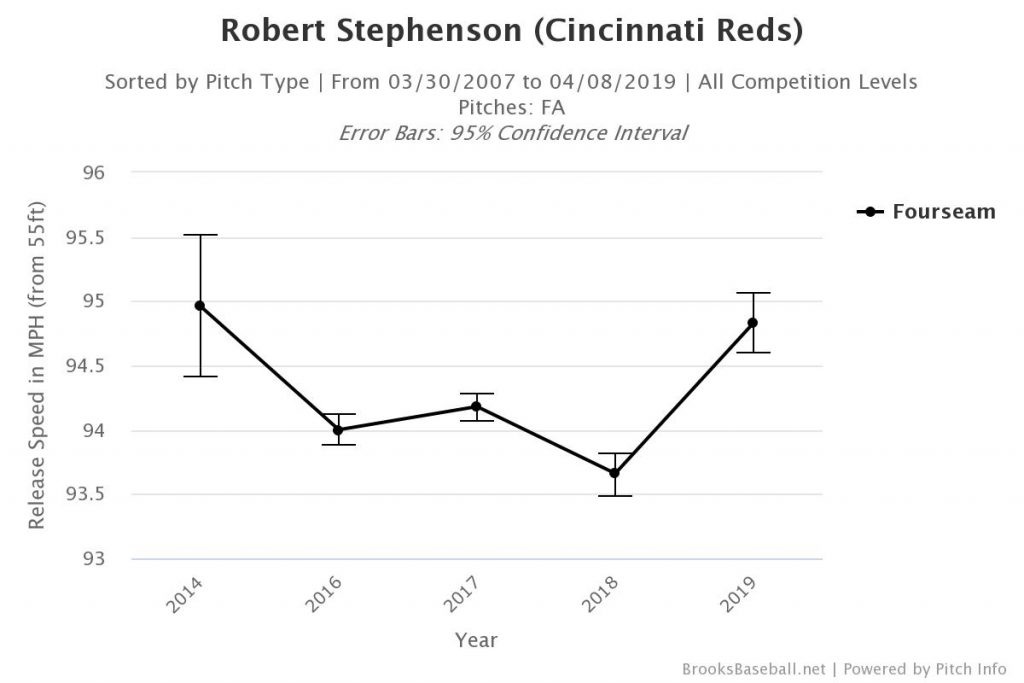 Stephenson can also credit his early success to a slider that has become his best pitch.  As he mentioned in Bobby Nightengale’s story linked above, he used to throw a curveball but eventually scrapped it because he couldn’t control it. The slider is easier for him to control and fools hitters because it looks more like a fastball.

The slider is so good, in fact, that he now “pitches backward,” meaning he uses it as his primary pitch instead of the fastball. This trend started last year and has continued into 2019. McCullers brought this idea to the forefront when he threw nothing but curveballs in one outing during the World Series in 2017. Other pitches have embraced it, too. It played a huge role in Patrick Corbin’s breakout last season. This not only helps Stephenson feature his best pitch but minimize how much he has to throw the fastball. He can still use the heater to get ahead in the count and keep hitters honest — he just doesn’t need to use it as heavily.

Pitching in relief also allows Stephenson to focus on two pitches, and it’s seemingly paying dividends. Not only are his fastball command and velocity better, but his slider looks nastier than ever — and the data is there to back up the eye test. First, let’s look at the slider last year:

And compare that to this year:

Notice a difference? To the naked eye, the pitch appears to have a sharper bite this year — that “fall off the table” action, if you will. That’s because it’s getting more movement, both vertical and horizontal.

(Note that while the lines go in opposite directions, they both indicate more movement. The graph on the left means more sweeping action away from righties and toward lefties, and the one on the right means more drop.)

A deeper dive into the data shows a clear reason why his slider is getting more movement. Take a look at his spin rate on the slider each year:

Stephenson not only changed the grip on his fastball but on his slider. While his fastball spin has stayed steady, the slider is getting significantly more rotation and, as a result, movement.

A slider’s spin rate and movement can vary and still be a successful pitch because there’s no universal way to throw it. The shape of a slider varies tremendously between pitchers. Compare Max Scherzer to German Marquez. Both players throw highly effective sliders, but they look different. Marquez throws more of a sweeping slider, while Scherzer throws one that drops more than it sweeps.

Pitchers can use different grips and arm angles to change the spin of a slider. High spin doesn’t always equate to a lot of movement, though. Spin efficiency, which factors in the direction of the spin (spin axis) and how the Magnus Effect impacts it, is the most telling statistic for movement. Here’s a quick primer from Steve Mancuso on spin efficiency, also referred to true spin:

“Some spin (transverse spin) makes the ball move, but a different type of spin (gyrospin) doesn’t. Gyrospin is the kind of spin a quarterback uses when throwing a spiral, or a bullet has when fired from a gun. The goal with gyrospin is to prevent vertical or horizontal movement.

Trackman measures the “spin efficiency” of every pitch, which separates transverse spin from gyrospin. In short, it measures how much “good” spin the pitch has.”

Essentially, a high spin efficiency can provide that extra “life” on a pitch. A high spin rate with a low efficiency will have more gyrospin and will move straight with less movement; in other words, that pitch becomes more hittable. Sliders usually have a lot of side spin to generate horizontal movement.

Kyle Crick had the highest slider spin rate (3,196 rpm) in baseball last year and ranked second in horizontal movement. In other words, the pitch had a high spin efficiency. Garrett Richards was second (2,897 rpm), but his slider ranked 132nd in horizontal movement — a low spin efficiency. Both pitches are still effective, and Richards even had a higher swinging-strike rate, but you can tell the difference in movement between the two pitchers’ sliders.

Some pitchers can still get a lot of whiffs on sliders with a low spin rate because of a high spin efficiency. Because of the low overall spin rate, the movement isn’t as impressive, but the results are the same. But high spin rate certainly doesn’t hurt. The average slider spin rate in 2018 was 2,398 rpm. Pitches above that mark had a 14.4% swinging-strike rate, while pitches below were at 11.3%. On pitches swung at, sliders with above average spin got a 30.0% whiff rate; those with below average spin were at 23.8%.

Now look where he ranks in horizontal and vertical movement on the slider so far in 2019:

It’s no coincidence that the pitch is getting more whiffs. Stephenson is getting a higher spin rate and efficiency, which is translating into more movement. His slider is still in the middle of the pack in terms of movement, but it’s yielding positive results. Batters have swung and missed at the pitch 31.6% of the time he’s thrown it so far. That’s up from 25.0% in 2017 and 18.7% in 2018. Only six pitchers who’ve thrown at least 25 sliders this season have a higher SwStr%.

The Reds’ increased use of technology could be playing a huge role in Stephenson’s better slider. The team, like all others in baseball, has started using cameras from Rapsodo and Driveline to break down a pitcher’s spin rate and efficiency, velocity, movement, release point, and extension. By using this technology, a pitcher can figure out how to improve and find their ideal grips and mechanics. Assistant pitching coach Caleb Cotham worked for Driveline after his retirement from baseball and will play a critical role in communicating this data to pitchers. Sonny Gray discussed this in an excellent article by The Athletic’s Eno Sarris.

Early on, the work of new pitching coach Derek Johnson and Cotham seems to be paying off with Stephenson. Of course, this all comes with the small sample size caveat. However, Stephenson has made easily identifiable and verifiable changes that have led to his initial success in 2019. Maybe he’ll regress to the Stephenson of years past. But maybe — just maybe — the former first-round pick is finally putting it together with the help of new pitching coaches and technology.