The first rule of sports commentary is “Don’t react to the reaction” but I’m going to take a second to do just that. The Reds have had a rough start. The outfield can’t hit, the bullpen can’t pitch, and the team just can’t outscore the opposition. Many on Twitter have placed a good deal of blame right at David Bell’s feet.

Blaming Bell is easy of course. Last season we blamed Bryan Price for the 3-15 start, and so did the Reds front office, who canned the manager. But Bell isn’t Price, I might remind you. He doesn’t have four prior seasons of losing baseball under his belt, and he has yet to field a team that remembers the point of the game is to have the bat make contact with the ball. I hope we can all agree that David Bell deserves a longer leash than nine games.

A greater question then is: Do any of Bell’s decision so far signal a greater cause for concern? Has he over-managed? Does he deserve any of the blame?

Managers, as visible and derisible as they are, really have little effect on a game. Tangibly, they can only do four things: Make the lineup, make pitching changes, pinch hit for players, and challenge calls. There’s intangibles too of course, but it’s far too early with far too few leaks from the clubhouse to know much about Bell’s intangibles.

Ignoring challenge calls because losing one usually has little effect, David Bell has created nine lineups, made 60 in-game decisions, and gotten ejected exactly once in his tenure as the Cincinnati Reds’ in-game helmsman.

First, we must acknowledge that not every player can play every day (April 6 was Eugenio Suarez’s off-day; April 7 Joey Votto’s). Second, we must also acknowledge that the lineup matters very little in the grand scheme of things. Yes, Joey should get more at bats than Tucker Barnhart, but whether Joey is ahead or behind Suarez will usually wash out over the long season.

C. Trent Rosecrans optimized the Reds potential lineup by The Book, otherwise known as the sabermetric bible, for The Athletic in February. He included Scooter Gennett and Nick Senzel, so reapplying the exercise without those two seems prudent.

Your best three hitters should hit No. 1, No. 2, and No. 4, The Book says, with the fourth and fifth best hitting No. 3 and No. 5. The leadoff man should get on base the most and the cleanup hitter should have the most power. At the bottom of the order, in the eighth or ninth spot, should be a second leadoff guy with some speed. And voila, that’s how the lineup should look. So how has Bell done so far? 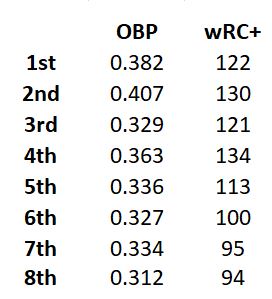 Perfectly by the book. All of these are composites consist of 2018 numbers weighted by who has appeared in what spot a certain number of times, and according to them, Bell has followed The Book’s advice to a T. The three best hitters by wRC+ hit first, second, and fourth, with the two highest OBPs in the one and two holes and the biggest bat in the cleanup spot. The fourth and fifth best hitters have hit in the third and fifth spot, respectively. And finally, the rest of the lineup rounds out in descending order by wRC+. Jose Iglesias, most commonly in the eight hole, also has the second fastest sprint speed behind six-hole hitter Jose Peraza.

Yes, it’s fair to wonder why Bell preferenced Matt Kemp over Jesse Winker against righties in back-to-back days, but also Winker has gotten the lion’s share of time so far. Maybe the young outfielder was sick or just a bit lame after Opening Day. Who knows, but Bell’s lineups have been spot-on so far.

In his eight games as the deciding force (Bell was ejected before any pitching changes were in the be made in the Reds most recent game), Bell has made 31 pitching changes. Of those, nine occurred after a pinch hitter came to the plate for the pitcher in the previous frame — unavoidable in other words. Another four came from the starter being pulled due to pitch count (Luis Castillo’s second start) or waning effectiveness (Sonny Gray’s first start).

Bell then has made 18 pitching changes from choice, not necessity. Most are innocuous, clean innings. I would like to focus on two of the not-so-clean variety.

With two outs and runners on first and second, David Bell pulled lefty Zach Duke in favor of righty Michael Lorenzen to face the Brewers eight-hole hitter Orlando Arcia. On the second pitch of the at-bat, Arcia hit a three-run homer that ultimately decided the game.

If you want to say Bell should have left in Duke after he had just struck out Yasmani Grandal swinging, I won’t blame you. Arcia does not have enough of a split to justify a reliever all unto his own. But the point of the matchup was never Orlando Arcia.

If Lorenzen got Arcia out, end of inning, no sweat. If he didn’t and the Brewers wound up with bases loaded and their pitcher, Jhoulys Chacin, coming to plate, then Craig Counsell would have had to make a tough decision. Either pull his starter who was dealing for a pinch hitter, or leave him in to hit with two outs and the bases loaded in a tie game. The presumptive pinch hitter for Chacin would have been Ryan Braun, a righty who does have a large split against righties. Braun’s OPS against same-side pitchers falls 140 points, from 1.000 to .840.

The Reds would obviously rather pitch to Arcia than Braun in any case, it just so happens they got burned.

No. 2 — April 6, Raisel Iglesias gives up walkoff double to Pirates

Obviously at the end of a tie game, David Bell should use his best reliever to give his offense a chance. But should he have sent him out for a third inning of work?

The Reds had already used four relievers before Iglesias, leaving only David Hernandez, Wandy Peralta, and Robert Stephenson in the pen. Hernandez had pitched in the previous two games, so it was more likely to have been just Peralta and Stephenson. Would you rather another inning of your top pitcher who had only thrown 26 pitches at that point after five days of rest or trust Wandy Peralta and Robert Stephenson?

It didn’t work out for Bell and the Reds, but I personally would much rather try Iglesias for a third inning before handing off to Stephenson than watch Peralta lose it in the 10th.

David Bell has used 19 pinch hitters, four pinch runners, and made six defensive adjustments. Most all of these changes have been straight-forward, except for two.

Twice, Bell has played the splits and pinch hit for Jesse Winker against Felipe Vazquez late in games. In both instances, the pinch hitter struck out swinging.

Against lefties, Jesse Winker has hit .183 with a .595 OPS. Truly horrible numbers. And Felipe Vazquez is a special type of lefty with a fastball that touches 100 mph and a wipeout slider that careens across the plate.

Jesse Winker’s first replacement, Kyle Farmer, has hit .235 against lefties with a .558 OPS. Not much better than Winker at all, and in fact, I would argue worse. Sadly, Farmer was the last man on the bench that day. Why Bell went with Farmer instead of just letting Jesse test his luck, I don’t understand.

Winker’s second replacement, Curt Casali, does actually have success against lefties with a .826 OPS for his career. He just doesn’t have any success against Vazquez, now sporting a 1-4 career record with three strikeouts.

For all the consternation I’ve seen on Twitter regarding David Bell, he hasn’t really done anything wrong yet. One questionable pinch hitter and a few early hooks for relievers, but nothing glaringly dumb. Most of the complaints seem to be hindsight-fueled quibbles, more mad that the decision didn’t work than that it was made.

Really, Bell has given all we’ve asked of him so far: Sensible lineups, aggressive bullpen management, numbers not names based decisions. The Reds haven’t been good in 2019, but David Bell deserves the smallest morsel of blame much less the lion’s share. So let’s all calm down on Twitter and give him a shot to do better than 3-15 before we start calling for his head.