Unfortunately, they can’t seem to hit and pitch well on the same day as the Pirates took the victory in extra innings. It was the Reds’ fourth one-run loss of the year.

Cincinnati jumped out to an early two-run lead, its first since Opening Day, to ignite some life into the team. As fate would have it, though, that didn’t last.

Here’s how it went down:

In baseball’s usual weird form, the drought was broken by an unlikely player.

Kyle Farmer, starting at third base in place of Eugenio Suarez, broke the 30-inning scoreless drought in the top of the third inning. He smashed a hanging breaking ball from Trevor Williams for a two-run home run — the first of his career — to center field. And he didn’t just plate himself; he knocked in another runner. The Reds scored two runs at once. Did you know that’s legal in baseball? It was also the first home run allowed by Pirates starter Trevor Williams since August 22, 2018.

? Kyle Farmer gets the Reds on the scoreboard! ? pic.twitter.com/ZbBLea5ejb

The third-inning outburst didn’t stop there. Scott Schebler, Joey Votto, and Yasiel Puig hit three straight singles to plate another run. The party kept going in the fourth. Derek Dietrich led the inning off with a single and scored on a double into the left-field corner by Curt Casali.

Votto provided more fireworks in the eighth inning, hitting a 106-mph homer to center field to tie the game after the Pirates had reclaimed the advantage two innings earlier. It was his 270th career homer, tying him with Adam Dunn for fifth-most in Reds history.

Need a clutch hit? We know just the guy to call… pic.twitter.com/dKsjordRFH

Tanner Roark didn’t have his best stuff on Saturday afternoon. The Pirates consistently hit the ball hard against him, and he had trouble putting hitters away. Roark generated only five swings and misses while allowing 26 foul balls and 18 balls in play at an average of 88.9 mph. Still, he pushed his way through the fifth inning, allowing three runs on seven hits and two walks while striking out four. He was the first Reds starter to allow a home run this season when Josh Bell took him deep in the fifth.

It was another rough first inning for Roark, but he didn’t get help from his defense. Jason Martin led off the inning with a single in his first career at-bat and later stole second. With two outs, Josh Bell hit a fairly lazy flyball to right-center field. It dropped just out of the reach of right fielder Puig to score Martin. The hit probability on the ball was 17%. It wasn’t an egregiously bad defensive play, but it looked like neither Puig nor center fielder Schebler got a good jump. You can see both of their routes below (batted ball line is in red, the throw back to the infield — which missed the cut-off man — is in blue): 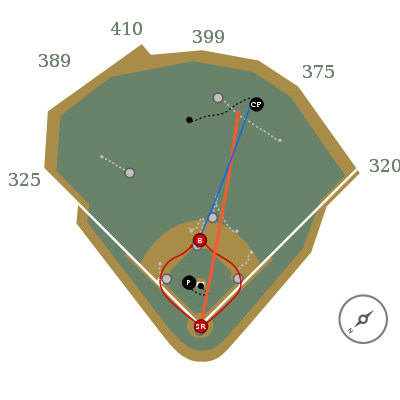 Some better luck came for Roark in the second inning. With runners on first and third, opposing pitcher Trevor Williams bunted the ball back to the mound for a safety squeeze. Roark initially turned toward second to turn the double play but changed his mind, throwing home instead. The runner was ruled safe initially; after a replay review, the play was overturned to give the Reds a rare break and avoid an early two-run hole.

Roark took advantage and got through the next two innings without issue before Bell’s solo shot in the fifth. He wasn’t efficient, racking up a high pitch count due to his shaky slider command and inability to put hitters away. But he exited the game with the lead.

Three relievers saw work in the sixth and promptly coughed up the 4-3 advantage. Jared Hughes was the first to emerge from the bullpen gate. He threw all of two pitches. The first went for a single, and the next was a sacrifice bunt. Bell called on Zach Duke for a lefty-on-lefty matchup against Adam Frazier with a runner on second base. Duke issued a walk and was pulled for Michael Lorenzen.

This critical situation seemed to be an ideal moment to use Raisel Iglesias, the team’s best reliever. But for a second time this season, Lorenzen allowed inherited runners to score. He got Jung Ho Kang to ground out but got behind 3-1 to Starling Marte before grooving a high fastball that went for a two-run double.

Iglesias did eventually appear, getting the ball in the eighth, ninth, and 10th innings. He looked far more like his normal self today. Although his control was a bit shaky, he gave up only one hit in his first two innings of work. After giving up the two-out single in the ninth, he promptly picked off Pablo Reyes to avoid facing Bell. Most importantly, his velocity was back. His fastball averaged 95.4 mph and topped out at 96.9.

Bell sent Iglesias back out for the 10th inning. This was his first appearance longer than two innings since 2016. He struck out Bell to start the inning, but it fell apart afterward. Pinch hitter Francisco Cervelli singled and Kevin Newman doubled to end it and give the Reds a seventh straight loss.

Stat of the Game

The last few of these have been depressing. Let’s do a fun one in honor of the Reds scoring again.

Anthony DeSclafani (1.80 ERA, 2.94 xFIP) will look to build on his strong debut on Sunday. The Reds will look to finally get another win against the Pirates. First pitch is again at 1:35 p.m. ET. Pittsburgh will send Chris Archer (0.00 ERA, 3.54 xFIP) to the mound for his second start of the season.