And A Little Touch of Harry in the Night

“That was the afternoon we had, clear and sparkling, breezes heightening the air’s crispness. Perfect for baseball. I felt like I was thirteen again. We pushed through the crowd. Before us lay the field, a green mat surrounded by swirling color and sound.

Harry stopped and grouped us. His eyes met mine, moved briefly to those of the others. ‘We know what these fellows are,’ he said, his words barely audible. ‘let’s show them our ginger today.’ Head high, he turned toward the field. We marched in single rank, eleven abreast, in rough step. Andy was on my left, Hurley my right. Our crimson stockings flashed across the grass. From the crowd came an anticipatory roar. And I had a sudden and very clear realization that there was nowhere else I’d rather be.”

— from If I Never Get Back, by Darryl Brock

From high up in Section 529, the view is spectacular; the air thin. Even the great climber, Anatoli Boukreev, would need supplemental oxygen and a sherpa if these were his seats. The faraway faces on the diamond are mostly familiar and the grass is as green as I remember it some seven months ago. This air, this excellent canopy that hovers over this enclosed sea of humanity is crisp, bright and blue.

One can almost feel the ghost of Harry Wright.

How I arrived here I am at a loss to say. Perhaps it was too much of Charlie Sweasy’s flask the evening before. Or the errant throw soon after that caught me about the temple, unaware. All I know is that I am now on the city square amongst the multitudes, as horse drawn wagons of people parade by. I’m looking for the scoreboard that will keep me apprised of the particulars of today’s match. My gaze is dwarfed by the impossibly tall buildings surrounding the square with the fountain, daring me to dream. Machines outside the periphery of my imagination roll by. The concatenation of sights and sounds is nearly too much.

A young couple approaches as if they know me. “We’ve been waiting for you,” the young lady whispers, reaching out to take my hand. I give it to her, my mind a void. With her young man on my other side, they lead me down the street toward the river. Along the way, others join our march. They approach wordlessly, greeting me only with knowing smiles and courteous nods. Our group continues to grow, as if bills announcing our arrival have been handed out to the bourgeoning crowd beforehand. We cross above a massive roadway with carriage machines moving quietly at a locomotive’s pace. Safely across, I am welcomingly ushered through a side gate and into a massive cathedral of concrete and steel, the edifice demanding words I cannot come by, the day’s depredation on my senses being what it is. As familiar as everyone seems with me, I am disjointed by all the unfamiliarity around me. Not a streetcar or spittoon in sight. But lo, when we turn the corner and the diamond is revealed!

As I take my seat, an American flag of unheard-of size sporting too many stars unfurls just above the grass. The anthem plays and hands point to the horizon as two very large birds approach at an ungodly pace. Within moments they are directly overhead. The shriek of these enormous creatures has me all a pucker. I duck behind the seat in front of me to the grinning faces of those around me.

The festivities having subsided, I can survey the grounds. These nine are marvelous lads, each as fit as any man I have ever seen, including Asa. The uniforms are a revelation, tightly tailored and impossibly bright. It’s good to see the familiar Gothic “C” amongst the crowd, even as “REDS” carries the day on the boys’ uniforms. Only one man wears his britches correctly, the one playing first sack. His stockings are in full bloom and of a most boisterous red, his gaze as piercing as any Sweasy ever mustered. It’s clear that he is Cincinnati’s kingpin ballist, a point driven home minutes later when he bludgeons a ball off the outfield wall for a two-sacker. This looks to be a swell match today.

Indeed, it would be. Luis Castillo rewarded a new manager’s faith in him, delivering a jewel of a game to begin this jewel of a season. The Buccos—and Josh Bell, in particular—flail at Castillo’s offerings as if they are swinging boat oars. In muscling a Pirate delivery over the fence, Jose Peraza didn’t just tie the game. For a day, he rebuked the “Punch-n-Judy” label long ago slapped to the back of his baseball card. And while 44,049 perch on the edge of their seats each time Yasiel Puig strides to the dish, it is a bit player by the name of Derek Dietrich who comes out of nowhere to ring down the curtain on Pittsburgh.

The Dietrich home run is a sudden reminder of how much the Reds have done right so far. The three-run blast stifled a Pirate comeback every bit as much as seating Johnny Bench next to Commissioner Rob Manfred stifled the boos hours earlier on the Fifth Street parade route.

David Bell and his staff managed the game as if they had a plan. It will be interesting to see what they can do with a young pitching staff of untapped potential. In so many ways, the sun was shining on the banks of the Ohio River.

All that remains is one last epic at bat—twelve pitches—and the Pirates are retired for the final time. The home crowd rises in full throat. Today, Cincinnati is in first place.

As evening approaches, a tap on the shoulder signals one last touch of Harry in the night:

They take me to field level, past the mob and back through the glass doors of the museum. Up two flights my new friends shepherd me, past shiny new glass displays, past unrecognizable names: Hahn. Rixey. Vander Meer. Walters. Nuxhall. Kluszewski. Bench. Morgan. Larkin. With each stride down the long hallway, the years rush by. There is no time to stop and wonder. We push ahead until we reach the wall awash in red. With each step closer it begins to dawn on me. 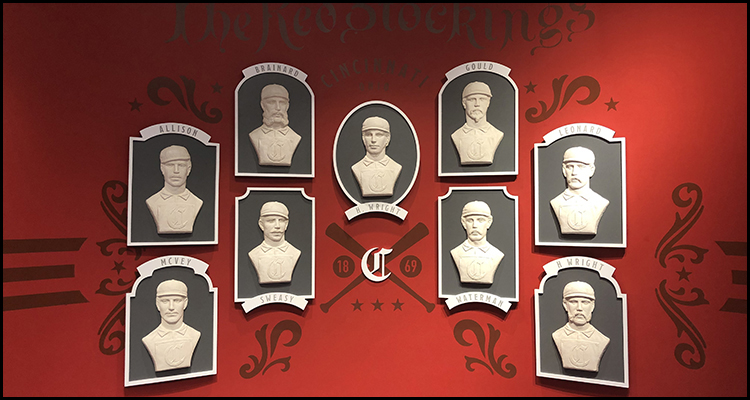 The young lady from the square is again by my side. She gives my arm a squeeze, gently pivoting my gaze to the left; to my visage painted on the wall; to my being fully in bronze. 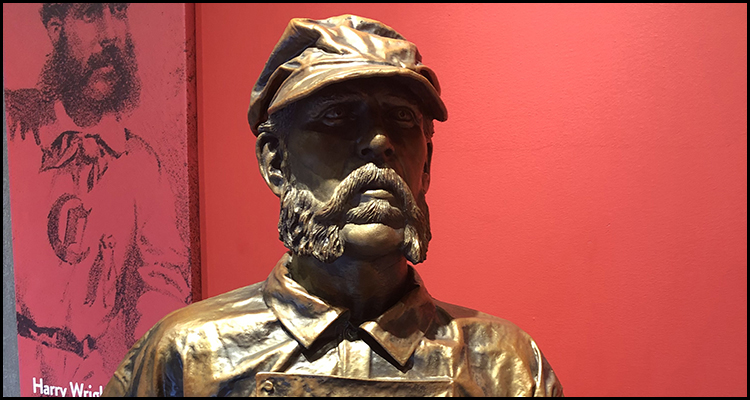 One more time comes the booming chorus from the distant past:

“Our captain is a goodly man,
And ‘Harry’ is his name.
Whatever he does is always ‘Wright,’
So says the voice of fame.
And as the leader of our nine
We think he can’t be beat,
For in many a fight old Harry Wright
Has saved us from defeat.”

“Hurrah, hurrah,
For the noble game hurrah!
Red Stockings all will toss the ball
And shout our loud hurrah!”

They crowded around me now in silence. Warm smiles and eyes brighter than any kerosene globe embrace me. This day, which began so disjointed, has seen its fog lift. I know where I am, finally.  Reunited with my beloved boys. Here in Cincinnati. I am home.

Note: Thank you, Darryl Brock, wherever you are, for your novel, If I Never Get Back, which was the inspiration for this piece.