Tyler Mahle had it all working. The Reds offense had it all, uh, not working.

For the second straight day, the Reds were shut out and wasted a gem from their starting pitcher. The offense hasn’t scored a run since the eighth inning of Tuesday’s game against the Brewers when Eugenio Suarez hit a solo home run. Are we having fun yet?

Once again, there’s very little to talk about in this department. The offense scrounged together only three hits against Pirates starter Jordan Lyles, who has bounced around from team to team for many years as a No. 5 starter. To their credit, the Reds made some solid contact and got little to show for it. The team hit 10 total balls of at least 95 mph. Only four of them fell for a hit.

Tucker Barnhart was the only Reds hitter with multiple hits, picking up a 104-mph double and a single.

The only real threat the Reds posed was in the ninth, and it only started due to a wild pitch on a third strike to Matt Kemp. Jose Iglesias followed with a double on a misplay by right fielder Pablo Reyes, but Pirates closer Felipe Vazquez fanned pinch hitters Curt Casali and Kyle Farmer to end it.

If there are any positives, Jesse Winker and Scott Schebler both broke their hitless streaks to start the season. Winker’s 0-for-15 skid ended in the fifth inning with a ground-ball single up the middle. Schebler snapped his 0-for-18 funk with a double in the sixth.

The good news is the starting pitching continues to impress. Tyler Mahle had it all working in his 2019 debut. He got through the first inning in six pitches, all strikes, which set the tone for the game. Painting the corners with his fastball and mixing in his revamped slider and changeup/splitter to keep hitters off balance, Mahle pumped strikes all night long. Of his 78 pitches, 53 were thrown for strikes and those that missed the zone were right on the periphery. 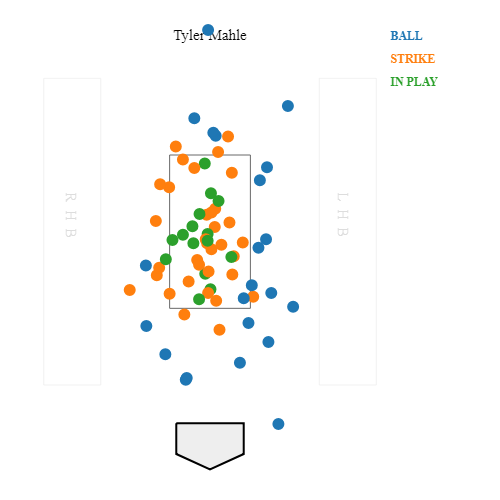 Most notably, he didn’t walk a batter — the first Reds starter to accomplish that feat this season — in his six innings. While he didn’t miss a ton of bats (6) as he leaned heavily on his fastball, he still struck out five batters. Mahle allowed only five hits on the night as the Pirates barely threatened against him.

The most trouble he got in was in the fourth inning. Mahle gave up a one-out single to Josh Bell and a two-out single to Melky Cabrera. Winker, the left fielder, threw a perfect strike to the cutoff man, Jose Iglesias, who fired the ball to second base for the third out as he caught Cabrera trying to take an extra base.

In desperate need of offense, David Bell sent Derek Dietrich to the plate as a pinch hitter in the seventh inning, ending Mahle’s night despite a low pitch count. David Hernandez was the first man out of the bullpen. He allowed a pair of singles, one of them a weak grounder that snuck through the infield on a hit-and-run play, to put runners on the corners with one out. The first run of the game came home on a fielder’s choice. It was the only one the Pirates needed.

Wandy Peralta came in to get the last out of the seventh and the first of the eighth. Michael Lorenzen was next in line and fell victim to some tough luck. He gave up a pair of weakly hit singles to Starling Marte and Francisco Cervelli followed by an RBI single to Josh Bell with the infield drawn in.

Stat of the Game

As bad as the offense has been through six games, the complete opposite is true for the pitchers. Over the last three games, the combination of Anthony DeSclafani, Luis Castillo, and Mahle has allowed only two runs and nine hits in 18 innings. Reds starters now have a 2.34 ERA through six games. Nobody would’ve guessed the team would be 1-5 with that kind of performance from the rotation.

The Reds' starting outfielders have gone a combined 6-for-65 (.092) so far this season.

That is the worst average by any starting outfield through six games of a season in the live-ball era (since 1920).