Let’s get the obvious out of the way first: It was cold on Sunday. Cloudy, 35 degrees with 13mph winds do not make for agreeable baseball conditions. Many of the Reds wore head coverings to protect their ears. Starter Sonny Gray wore long sleeves.

However, as David Bell said in his pre-game comments, when it’s cold outside, “just don’t talk about it.” Trevor Williams, the Pirates starter, paid no heed to the cold and spun 6.0 shutdown innings with his forearms bared to the world.

Gray, to his credit, did not blame the cold. “Look, their guy went out and threw six shutout innings and dominated the game, so I don’t think there are any excuses to be made on the weather,” he told C. Trent Rosecrans of The Athletic.

But still, it’s more than a little difficult to pitch in the cold. In the same Athletic article, Tucker Barnhart was a little more forgiving of his starter, saying he couldn’t feel his own fingers. And Rosecrans makes the astute observation that Williams, unlike Gray, doesn’t rely on breaking pitches, which require more touch and feel, to get outs.

As such, pitch selection played a large role in Sonny Gray’s location struggles, as did falling behind in counts.

As C. Trent noted, Sonny’s reliance on breaking balls and his probable lack of feel for them accounts for some of his propensity to fall behind. By my count on re-watching Gray’s start, the Reds starter threw 21 breaking pitches (16 curves, 5 sliders) with 43 fastballs and 8 change-ups. Those numbers differ slightly from the FanGraphs and Statcast counts. I’ll use my numbers but feel free to trust whomever. 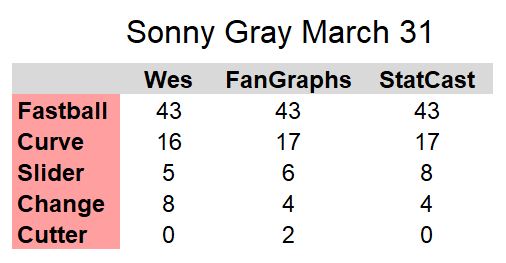 Early in the game, Sonny Gray lived entirely on his fastball and curve. All 25 of his first inning pitches were one of the two. He kept his fastball low and away, setting up a curve in the dirt for his put away pitch. However, after inducing groundballs from Adam Frazier and Starling Marte in the first plate appearances of the game, he never executed the curve in the dirt for an out again.

Gray hung a curve middle-middle to Josh Bell, who roped it into center to bring home Marte who reached on error for the first run of the game. After that single, Gray’s next seven pitches — six fastballs and one curve — were all called balls. To a degree, Gray was being squeezed, with the home plate umpire giving no grace on the lower third of the strike zone where Gray was living. Gray escaped the inning with well-executed fastballs, garnering a Jung Ho Kang groundout.

Lest it be forgotten, Gray pitched well in the first. An unfortunate error of his own volition that allowed Marte reach base  and a hung curve to Bell that could have been hit harder were his undoing. Otherwise, Gray mostly commanded his stuff, with a couple of slightly missed spots that every pitcher has.

Maybe feeling the pressure to keep it close after a Reds 1-2-3 bottom of the first or maybe just losing his feel, Gray truly lost his command in the second. After quickly getting ahead of Melky Cabrera with two well-placed fastballs, Gray spiked two curveballs in the dirt and then wasted two high fastballs.

Something to understand now about Sonny Gray is that his fastball will never be his out pitch. It is impossibly straight and sits in the low-90s, making it more of a get-ahead or battle pitch than a strikeout pitch. As for the rest of his arsenal, Gray famously blasted his slider before the season started, noting how its mostly a spinner he tries to put in the dirt. And he uses his change-up sparingly as there’s not much movement or velocity difference to it. The curveball is the out pitch, so what should Gray do when he doesn’t have his out pitch? Try anyway it seems.

Gray hung a curve that Cabrera singled on, then got Erik Gonzalez to ground out on a nice fastball, slider, curve sequence. Then, the true runaway train moment.

Gray started his counterpart Trevor Williams’ at-bat with a fastball middle-middle that Tucker Barnhart wanted low and away. He then put another curve in the dirt before sticking with fastballs for the rest of the at-bat. Even though he’s a pitcher, Williams knew Gray was throwing him fastballs. Heck, everyone in the stadium knew he was going to throw a low-90s fastball right down the pipe and hope for an out. It didn’t work. Sonny lost his fastball.

Adam Frazier singled off a middle-middle fastball the next at-bat, then Gray decided to return to his curve for Marte. He walked him on six pitches, four were curves.

The inning ended on a one-pitch double play courtesy of Corey Dickerson, which — important to note — came as a result of Gray’s first change-up of the day, placed on the low, outside corner.

Against the first four batters of the third, Sonny Gray threw seven change-ups in 11 pitches, getting two outs, walking two, and allowing one single. As an out pitch, Gray got both outs on the change but also allowed the single. Clearly, both he and Barnhart felt it was his best pitch to start the third.

Then, with the pitcher up, Gray threw five straight fastballs, missing his spot by a foot or more three times. His day finally ended.

Gray struggled so much because he lost his curveball after the first inning, leading him to choke his fastball time and time again. By the end of his rope, the change-up was his only effective pitch, but no major league pitcher can survive on a change-up by itself.

Last season during Gray’s early troubles, Yankees beat writer Lindsey Adler dove into Gray’s past searching for an answer. She found that Gray more than most pitchers adapts while he’s on the mound, and that his pitches often defy classification. One particularly striking example involves his change-up. The pitch wasn’t moving as it usually did, former teammate Sean Doolittle told Adler, but instead of dropping the pitch from his arsenal, Gray adapted.

“Sonny like, embraced it. He would be able to use it as a weapon, and I don’t know of anybody else who does that. It’s just rare to pitch that much in the moment. That kind of stuff, it’s crazy to me as a guy who can’t do that to a baseball at all,” Doolittle said, emphasizing that Gray tends to work with what he does have any given day.

On Sunday, whether it was because the cold was messing with his fingergrips or Gray was overcompensating for one lost pitch by choking another, the Reds starter had nothing. And that’s okay. Neither the trade nor the extension is a bust because a pitcher who works on feel likely couldn’t feel his fingers.