Anthony DeSclafani pitched five terrific innings, but his 2019 debut was spoiled on a three-run home run by Orlando Arcia off Michael Lorenzen in the sixth inning. The Reds got the tying run in scoring position in the bottom of the sixth and cut the deficit to one on a Eugenio Suarez solo home run in the eight, but could never get over the hump. The Reds fall to 1-3 on the season, matching their same start through four games last season. The Reds are already 3.0 games behind the first place Brewers. 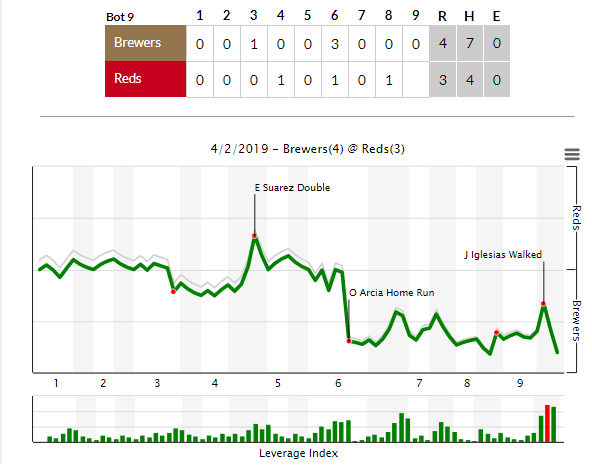 According to Fangraphs WPA statistic (winning percentage added), the most important play of the game was Michael Lorenzen allowing a 3-run home run to Orlando Arcia with 2 outs in the 6th inning, giving the Brewers a 4-1 lead. That play decreased the Reds chances of winning by 33.4% (from 48.7% to 15.3%).

Eugenio Suarez drove in his first run of the season with a double in the 4th inning and topped that with a solo home run in the 8th inning. He was 1 for 10 through the first 3 games, so that had to feel good.

Joey Votto had a pair of walks, scoring both times. Votto’s OBP is a mere .412.

Yasiel Puig had two hits. One of those hits had an exit velocity of 65.0 MPH and an expected batting average of .060, but I am sure he will take it.

Robert Stephenson pitched two scoreless innings in relief. He gave up some hard contact that he was fortunate were outs in the first inning, but had two nasty strikeouts in his second inning of relief.

Michael Lorenzen made a big mistake to the Brewers #8 hitter, Orlando Arcia that cost the Reds the ball game tonight. He had looked pretty sharp in his season debut on Sunday, but tonight was one he’d assume to forget.

Jesse Winker got the start tonight and went 0 for 4. He is now 0 for 9 on the season. Matt Kemp struck out in a pinch-hit appearance tonight and is now 0 for 8. For all the debate of who should start in left, neither is off to a good start.

David Bell has certainly showed early in his managerial career that he is going to the bullpen early and often. Bell did not let his starter finish the 6th inning for the fourth straight game to start 2019. This explains the eight man bullpen. It seems at least early on that the Reds are not going to allow their average starting rotation to face hitters a third and fourth time through the order. The numbers back this up as the correct move. Bell will certainly face plenty of criticism for this, but this exact handling of a rotation won the Brewers the NL Central in 2018.

The big second guessing tonight came in the 6th inning. Bell pulled DeSclafani for a pinch-hitter in a 1-1 game in the bottom of the 5th. Disco had 89 pitches, so at best he had one inning (is that worth not using a pinch hitter in a tie game…no). Bell brought in Michael Lorenzen with runners on 2nd & 3rd with 2 outs and Orlando Arcia up with the pitchers spot up next. Bell elected to have Lorenzen pitch to Arcia instead of forcing Craig Counsell to take out his pitcher who was cruising. The move backfired with Lorenzen giving up a 3-run bomb to Arcia and that allowed Chacin to say in the game. I still believe this was the correct move all around by Bell. Arcia hit .233/.265/.305 in 280 PA last year vs RHP and Ryan Braun was in the on-deck circle. You just tip your cap and move on. And as far as not forcing the Brewers to take out Chacin, he loaded the bases in the bottom of the 6th after 2 walks and had to be pulled.