[This post was written by friend of the site, Doug Dennis. Doug has been a bullpen analyst for BaseballHQ.com since 1999. Thanks Doug, for sharing your personal experience with us. — SPM]

Chuck Harmon was the first African-American baseball player for the Cincinnati Reds. He died at the age of 94 last week after an amazing life. I am not an expert on Chuck—far from it. You could probably learn a lot more about him from SABR or from his kids and grandkids.

I did know him, though. Fresh out of law school in 1995, my first law job was as a clerk at the First District, Ohio Court of Appeals. I worked there for two years—from May 1995 to May 1997. Chuck was the bailiff there during that time, and it gave me an opportunity to talk to him any time I wanted. With the stories he told, wow, I sure wanted.

My memory fades, of course. That was 20-25 years ago. There are a few stories that stick out in my mind. Some are basketball stories. Chuck grew up in Indiana and Indiana University was a powerhouse in college basketball. But because he was black, he wasn’t going to get to play for Indiana, wasn’t recruited, wasn’t wanted. Ever watched the movie Hoosiers? Chuck’s high school team won the state title back-to-back years in 1941 and 1942. Indiana University knew who he was. Instead, he went and played for the University of Toledo.

Back then, the National Invitation Tournament (NIT) was the big tournament, not the NCAA Tournament. In 1943, Chuck Harmon’s freshman year, his Toledo Rockets went all the way to the finals against St. John’s, where they lost at Madison Square Garden. He was an All-American basketball player as a freshman. Was he bitter towards Indiana University? “No, Doug, that’s just the way things were back then.” He didn’t need Indiana to go to the NIT finals—he went with Toledo. But personally, in 1995, I was bitter for him anyway.

After that year, Chuck Harmon left school to join the Navy for World War II, as many his age did in the early 40s. He was assigned to the Great Lakes Naval Station near Chicago. He played for the black baseball team there and roomed with Larry Doby (second African-American player in MLB history behind Jackie Robinson, playing for Cleveland in 1947). But what Chuck loved to talk about from those days was playing basketball for the Great Lakes Naval team with Ara Parseghian, who in turn was playing football there for coach Paul Brown. It truly was a smaller world back then.

I won’t bore you with the stories about Chuck playing for the Boston Celtics practice squad, where he was paid to help them get ready for the season, even though they would never hire a black player. “Doug,” he said, “they paid me to play basketball, who was I to turn that down?” He could have been in the NBA if he were not black. I was a little bitter toward the Celtics, I admit.

Chuck Harmon played baseball for Toledo for three years and at the Naval Station and took those talents to the Negro Leagues Indianapolis Clowns in 1947. The photo of him on the wall in my office is in a Clowns uniform. He used the name “Charlie Fine” so he would not jeopardize his college eligibility. But things were changing in baseball and the St. Louis Browns signed him to a minor league contract. While playing that first year, Chuck met his wife.

But one of the stories that stuck out to me came later, playing in Double-A ball in the segregated South either in the late 40s or early 50s. Players got paid for games played, not season contracts. He was a very important player to his team’s wins and losses, but he had to endure the segregation laws. For example, the white players stayed in one hotel, Chuck had to stay elsewhere. White players were allowed to ride in cabs, Chuck had to walk to the park and back to the train station.

One night, there was a game in Alabama that went late and spilled into extra innings. The manager was getting worried because he needed Chuck on the field, but he also needed him to make the train so he could play the next day in the next town. He ended up leaving Chuck in the game and had a local clubhouse attendant arrange for a cab to illegally take Chuck after the game to the train station.

After the game, Chuck didn’t want to take the chance to ride in the cab and pay a fine or go to jail. But the manager insisted that it would all work out fine, and anyway, he would miss the train if he didn’t. Chuck got into the cab and the police were there instantly and arrested Chuck. Whether it was the clubhouse attendant, or just the fact that the police themselves could see that there was no way Chuck could make it to the train station on time, Chuck was put in jail for this.

It took until the next morning for the team to get Chuck out of jail, because a judge needed to order it. Chuck missed the train, missed the game, and missed that game’s paycheck. He also had to pay a fine and then still walk to the train and buy himself a ticket to catch up with the team. That story infuriated me. But Chuck? “Well, Doug, I was trying to tell them [the team] that this wasn’t going to work. But they didn’t listen and then it was too late. They did their best to get me out and back with the team. It’s hard to get mad about that kind of a mistake.”

I admit that I was very naïve about the 1940s and 1950s south, other than what I saw on TV as a kid during the 1960s. Being jailed for getting in a cab because my team told him to do it—that shocked me, and I am more than a little bitter about Alabama being that ridiculous with my friend, Chuck Harmon. 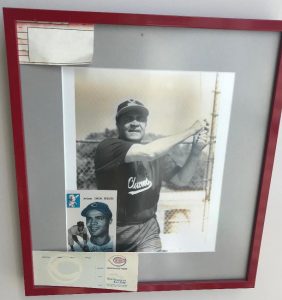 Chuck was eventually called up to the Reds. And on April 17, 1954, he popped out as a pinch hitter as the first ever African-American to play for Cincinnati. Chuck had a tagline for that moment that he said to people who asked about it, “When you are born, you are history. You don’t realize when you are actually making history.” To Chuck, it was just a matter of being on the team and being asked to pinch hit. Chuck was also careful to always mention Nino Escalera, who was a Puerto Rican black who played in the same game. To Chuck, Nino deserved the same billing (and as usual, Chuck was right). “If it is that important, they might as well get it right” he would say. Chuck gave me a 1954 baseball card of himself—I have that still.

Chuck would always laugh at the idea that he had to worry about how he would be treated. Like the way he was treated in Alabama, or Indiana. Or by the Celtics. Or by fans. Chuck would say that he was too busy worrying about trying to hit or field or steal bases or slide or things like that, so he didn’t have time to think much about what a fan might think. He gave Jackie Robinson a lot of credit, too. Chuck figured that Jackie’s great example and the fact that Chuck had served in the military and was well thought of for his temperament in his many stops, including basketball stops, gave the Reds confidence that he would be able to take it and stay humble.

Chuck played for the Reds until he was traded to the Cardinals in early 1956. He was traded again in early 1957 to the Phillies, and after that played in the minor leagues all the way until 1961, when he retired at the age of 37.

Chuck scouted for the Braves and Indians and for the Indiana Pacers for awhile. He worked 24 years at the First Ohio District Court of Appeals—where I met him. When MLB had its first Jackie Robinson Day, the Reds celebrated Chuck Harmon on the field. He invited me and some others to sit with his family in a special section and I did—as big an honor as anything that I’ve ever had in my life. I still have that ticket.

When the Reds dedicated the statue for Frank Robinson, the Expos were in town to play the Reds and Mr. Robinson was going to give a little speech and get back to his team. At that point, I was working at a firm, but I got a call from Chuck that I should come down there and bring my (then very little) kids with me.

I did—and Chuck was Cincinnati’s ambassador to Frank Robinson for the ceremony. Chuck brought Frank Robinson over to say hi to my kids and me when it suited. Chuck knew what a thrill that would be for me, and made the time to make that happen. This is the kind of person Chuck was.

Chuck was very involved with the Urban Youth Baseball Academy, teaching young kids to play and have fun for awhile. He never stopped, even after he retired from the Court of Appeals. Whatever he could do for kids, he did.

My last story about Chuck was my last day at the Court of Appeals. I had been hired by a firm, my two years there were up, and I was not going to see him every day anymore. He asked me if I would go to lunch with him. I said I would. I asked him where, but he said, “don’t worry about that—you’ll like it.” I had no idea.

That day, we went outside the courthouse. Chuck said, “I am kinda old, so we need to take the bus.” We got on the bus and it only dawned on me when we got to Riverfront (then Cinergy Field). The Reds had a day game against the Padres, and Chuck was taking me for a hot dog at the game.

We walked not to the ticketing, but to an unmarked door at the side of the stadium. An attendant said, “Hello, Mr. Harmon” and opened the door to an elevator. We went in, through the bowels of the stadium and emerged in seats right behind home plate. We were early enough for the players to still be taking batting practice. Barry Larkin and Deion Sanders noticed Chuck and came over to the netting. They showed both a deep respect for Mr. Harmon and where he had been. It was very touching.

We had “lunch” and watched Steve Finley hit a couple home runs. The Padres were ahead. Chuck turned to me and thanked me (thanked me!) and said he needed to get back to work and left. Finley ended up with three home runs that day.

I saw Chuck from time to time at the courthouse before he retired. Then I didn’t see him anymore. I saw him out with his family—maybe ten years ago—at Longhorn Steakhouse. Some of his kids and grandkids were there. It had been a long time. He was happy to see me. I was delighted to see him.

It was an emotional day for me last week when I learned that he had died. But 94 years old. And all the things he had done and seen. Not ever a tint of bitterness, even though he clearly endured things that I never would have. I wish that I could be that big of a person. We should all be so lucky.