The history minor in me has a particular horror of missing player introductions and great swaths of flags, so Josh The Pilot and I opted to watch festivities through the first inning at home. This also granted us the opportunity to hear, over the field mikes, an extremely specific animus (“BOOOOO!”) that exactly one fan held for the Pirate’s third base coach.

I thought that was to be the pregame highlight, but we wound up yelling at the television when the flyover following the National Anthem went completely untelevised, then yelling at each other when he realized the flight path was taking the F16s over our house. The four of us–me, Josh, and the jets– terrified the next-door neighbor, who was in her backyard, holding a glass of wine and watching the game through her screen door.

As fireworks burst on a huge overhead screen, we walked down a street meant for cars but clogged with foot traffic, then began to fight our way into the first bar that would have us. We first attempted a rooftop joint, but were told with a straight face that the wait was two hours, so we flounced off to spend our eleven dollars elsewhere.

We wound up at a bar built partially over the former infield site of Riverfront Stadium, and there I sat with my plastic cup of sparkling wine: Plopped the middle of the old stadium, glancing occasionally over at the new one, and lovingly reflecting that this is what six months of hard winter has at last bought us: 68 degrees and a life-hating bartender yelling “You want a lime?” at the guy in the full business suit down the bar.

This is the paragraph in which I normally would frown at everyone hunched over their phones, but I was too busy hunching over mine to catch what was going on twenty yards away on the other side of the ball park wall. I took a photo of the Opening Day-specific menu the bar was handing around, the wine list soaked with beer. I found an appropriate Snapchat filter for my video pan of the crowd. The television feed was on, but delayed: The crowd inside was generally alerted to A Happening when we heard fireworks from the neighbors. This was everyone’s cue to drop lager and find a screen to stare at, for cheering was impending. It was time travel at its finest.

I was surrounded by hundreds of people and yet outside of the action; in the party, but not attending it. The bar awarded Luis Castillo a round of applause when he was given a seat after his outstanding start, which is the kind of audience participation I can appreciate. “IS OUR SIDE BATTING?” the woman on right side of me screamed at the guy on my left, which is the kind of audience participation I cannot. Someone on Twitter described the strike zone as “a Tetris piece.”

We had to leave early for a nephew function, and as we made our way to the car, we dodged people selling bottles of water, teenagers on corners yelling “I’m right here, where are you?” into their palms, and rental scooters drained of battery. I was careful to spread it all between Snapchat, Instagram, Twitter, and Facebook. When we’d been walking for twenty minutes and I realized the ballpark had been ominously quiet, I bent my head to check the score. Still ahead. Still safe. We decided to collect free Opening Day Chick-Fil-A, and discussed also adding in a free Skyline coney, but decided we were too old and undermetabolized.

“That was fun,” decided my husband, who did not grow up here and who I’ve had to make understand. He’s adapted admirably, and properly capitalizes Opening Day. 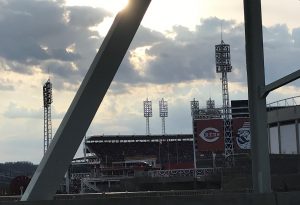 I felt bumped about today, and parceled the game together in spoonfuls of television, radio, real-time noise, and social media feeds. Nothing filled me and everything left something missing. I had now experienced Opening Day inside the parade route, outside the parade route, outside the city wondering why everyone else isn’t celebrating, upon my couch, and inside downtown but not the ballpark. And of those, the worst–by far the worst–is outside of Cincinnati, checking the score alone.

Today, I wasn’t alone. Overwhelmed and tossed about, maybe, but at least it wasn’t the deadly experience of knowing I could hit up my local downtown and park absolutely anywhere on this day, because it was nothing special. Instead, we had to leave the car in an entirely different state, drank sparkling wine from a plastic cup, and needed ten minutes to navigate a single street corner. And it meant I was here, with nephews suiting up for a game twenty minutes away and high school classmates bursting into my morning with texted parade updates.

It meant I was home.