The rebuilding process was a painful one for many reasons. Pitching was unquestionably the largest headache. Lots of highly touted prospects made their debuts, but none was able to establish himself in the big leagues. Through it all, one pitcher gave Reds fans hope for the future of the rotation: Luis Castillo.

Now, as the team looks to emerge from the rebuild, the right-hander gets the reward of starting on Opening Day for the first of what the Reds hope is many times. You see, no pitcher aside from Hunter Greene has a higher ceiling than Castillo in the organization. We’ve seen him flash that potential on several occasions already, but he has yet to take the next step into a consistent top-of-the-rotation arm. Yes, he’s technically already at the top of the Reds’ rotation. But there’s more potential in that right arm. “Ace” is term frequently thrown around when talking about Castillo’s ceiling.

The question is what he needs to do to get there.

What Luis Castillo Does Well

To determine where Castillo can go and how he can get there, we need to look at where he’s been and what he already excels at. Based on nothing but the eye test, no Reds pitcher — aside from maybe Raisel Iglesias — has better raw stuff than Castillo. The fastball explodes out of his hand, reaching 100 mph and sitting comfortably between 95 and 98. Among all starting pitchers who threw at least 500 pitches in 2018, only 10 averaged more heat on their fastballs than Castillo (95.7 mph) did on his four-seamer and two-seamer. That’s enough to get excited about on its own.

Pair that with one of the best changeups in baseball, and you have some tantalizing potential. The righty’s primary off-speed pitch has generated a higher percentage of swings and misses over the last two seasons than any other starting pitcher in baseball (min. 500 pitches). Last season, the pitch had the fifth-highest value for any qualified pitcher, trailing only Kyle Hendricks, Jacob deGrom, Zack Greinke, and Max Scherzer. Castillo also mixes in a slider with a solid 16.4% whiff rate.

That gives him four pitches that he not only throws hard but throws for strikes. Castillo’s smooth, seemingly easy delivery lets him keep the ball over the plate, as his career walk rate is just 7.6%. He took a step forward in that department in 2018, lowering that number to 6.9% from 8.9% in 2018.

To this point, those qualities have made him an above-average pitcher. He owns a 3.89 ERA, 4.12 FIP, 3.59 xFIP, and 3.85 SIERA in 259 big-league innings. His career strikeout rate (24.7%) is the highest of any Reds starting pitcher in history. Granted, part of that is the era he plays in. But the point is he has an electric arm — certainly one that seems capable of becoming a No. 1 starter and the anchor of a rotation. How can he get over that hump? We’ll start to answer that question now.

It’s been said that velocity is the top predictor of success for pitchers. Castillo tried to prove that singlehandedly last year. The biggest difference between the 2017 and 2018 versions of Castillo was the zip on his pitches. Yes, his fastball was still in the upper echelon of starting pitchers, but it was down by over 2 mph in the first two months of the season. At the beginning of the year, there were some rumblings about whether he was hurt. That didn’t prove to be the case. Notably, the velocity on his other pitches was down as well.

It’s quite possible the velocity dip was purposeful to gain more control. While it resulted in fewer walks on the season, it didn’t help his command within the strike zone, particularly against left-handed hitters, which I outlined last September. (We’ll dive more into the problem with lefties in part two of this column next week when we discuss pitch selection.)

Fortunately, the velocity problem didn’t persist all year. As the season wore on, Castillo’s velocity started to creep back up to where it was in 2017. 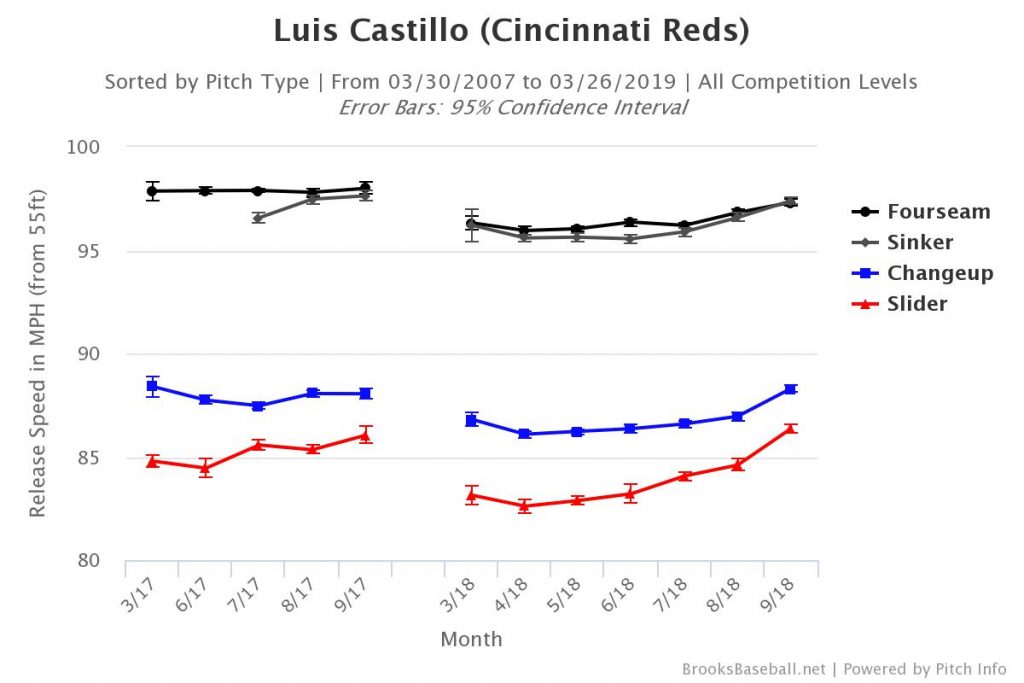 By the end of the year, he was back to averaging 97 mph on his fastball instead of 95 or 96. All his other pitches followed suit, and the performance improved with it. Here’s a look at his 10-game rolling xFIP from last year. Even if you’re not big into sabermetrics, you can get the picture from the blue trend line: he got better throughout the year, particularly in his last 10 starts when his velocity was up.

Just how important has that velocity been for Castillo in his short career? Here’s a breakdown of his four-seam fastball when he stays above and drops below certain velocity thresholds:

(Note: As wonderful of a tool as it is, Baseball Savant only lets you search for values greater/less than or equal to the inputted metric; in other words, you can’t calculate just greater or less than. Thus, to account for the pitches thrown between 96 and 97, I included the second row here.)

The first number that jumps out here is the whiff rate. The harder Castillo throws, the more bats he misses. This isn’t a groundbreaking concept, but it’s an important one. For each mile per hour a pitcher adds to his four-seam fastball, he gets a higher percentage of whiffs. Here are the rates since the dawn of the Statcast era in 2015:

Even though Castillo doesn’t have a high spin-rate four-seamer, which translates to more swings and misses, he can still miss bats with his velocity. Working up in the strike zone more often will only help him in this regard. In 2018, he missed a lot of spots as he tried to paint the corners. As a result, he made mistakes over the middle of the plate and paid for them, even more so because his velocity was down in the early part of the year. 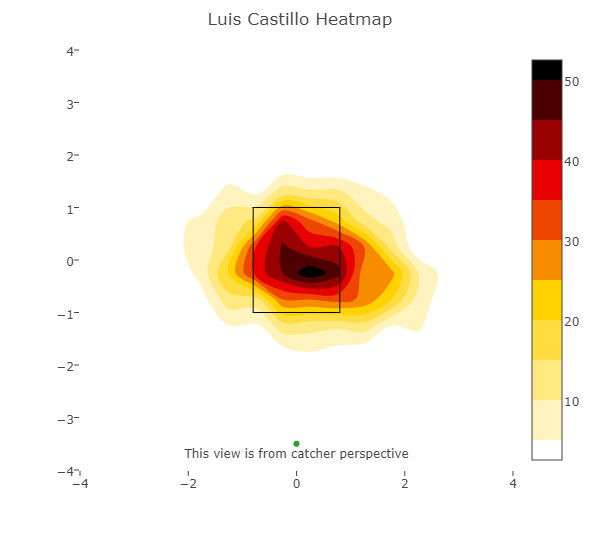 It should come as no surprise that he gave up the hardest contact when he left the ball in the middle of the zone. 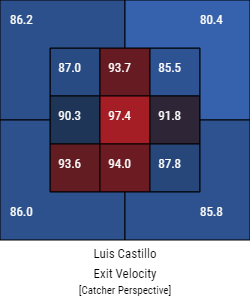 If he struggles to paint the corners, he can mitigate that by throwing up in the zone. While the graphic above demonstrates that batters hit the ball hard when they make contact in the upper middle portion of the plate, they don’t make contact nearly as often against Castillo and his high heat. Here are his whiff rates by zone in his career: 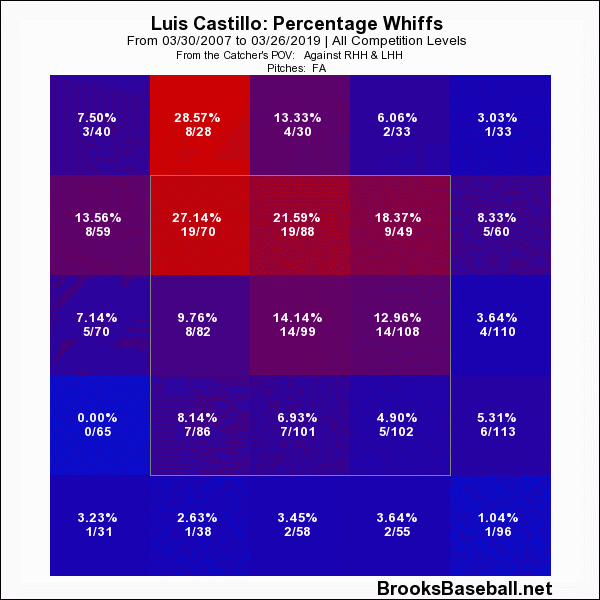 Not only does Castillo miss more bats when he throws harder and up in the zone — he also gets lower-quality contact. He still allows hard contact in these areas, but that’s mitigated by the fact that hitters don’t square it up nearly as often. 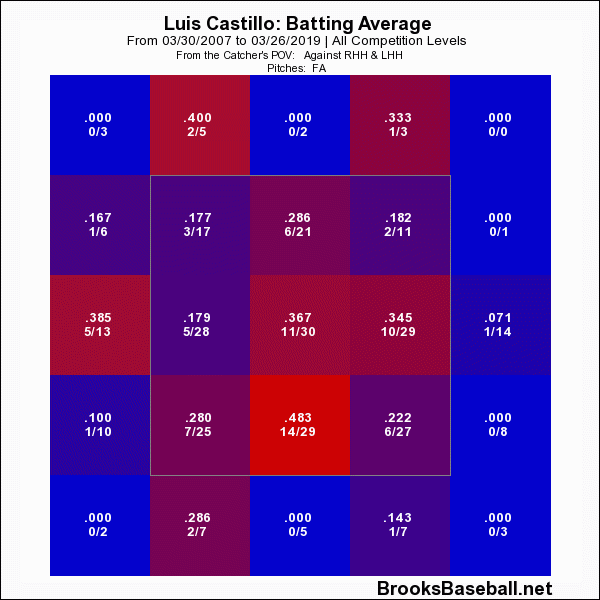 Castillo, and any pitcher, is better suited keeping the fastball away from the middle of the plate. But if he’s going to miss, he needs to do it up so hitters can’t catch up to it. That’s not to say he should only throw up in the zone, as that would help hitters identify his changeup more easily because he keeps it lower in the zone. He still needs to use the fastball lower in the zone to create effective tunneling for his changeup. However, it would certainly help him to change hitters’ eye level more regularly, especially if he continues his end-of-year velocity gains in 2019.

It was well-documented that Castillo struggled to find a consistent release point last year. A consistent arm angle accomplishes two major tasks: 1.) it helps the pitcher control where the ball goes and 2.) it helps him tunnel the ball, essentially making pitches look the same for as long as possible until they break in a different direction.

Steve Mancuso broke down the concept of pitch tunneling a few weeks ago in his series on evaluating pitching:

“Pitch tunneling delays the hitter from recognizing the pitch. Batters use cues to help identify pitches and decide whether and where to swing. Many of those signs come from body mechanics of the pitcher, including release point. The later the pitcher can postpone the hitter’s decision, the better the outcome for the pitcher.

Studies show that successful pitch tunneling is correlated to worse plate discipline by the batter, in getting him to swing at pitches out of the zone and take pitches in the zone. Swings-and-misses, strikeouts and weak contact are also positively associated with tunneling.”

Arm angles are nearly impossible to pick up with an untrained eye. Fortunately, we have metrics that measure a pitcher’s average vertical and horizontal release points.

Stephen Strasburg is one of the best pitchers in the game when it comes to keeping a consistent arm angle. This helps him disguise his pitches and tunnel them effectively. Take a look at his average vertical release point over his career, and note how close together each of the lines are: 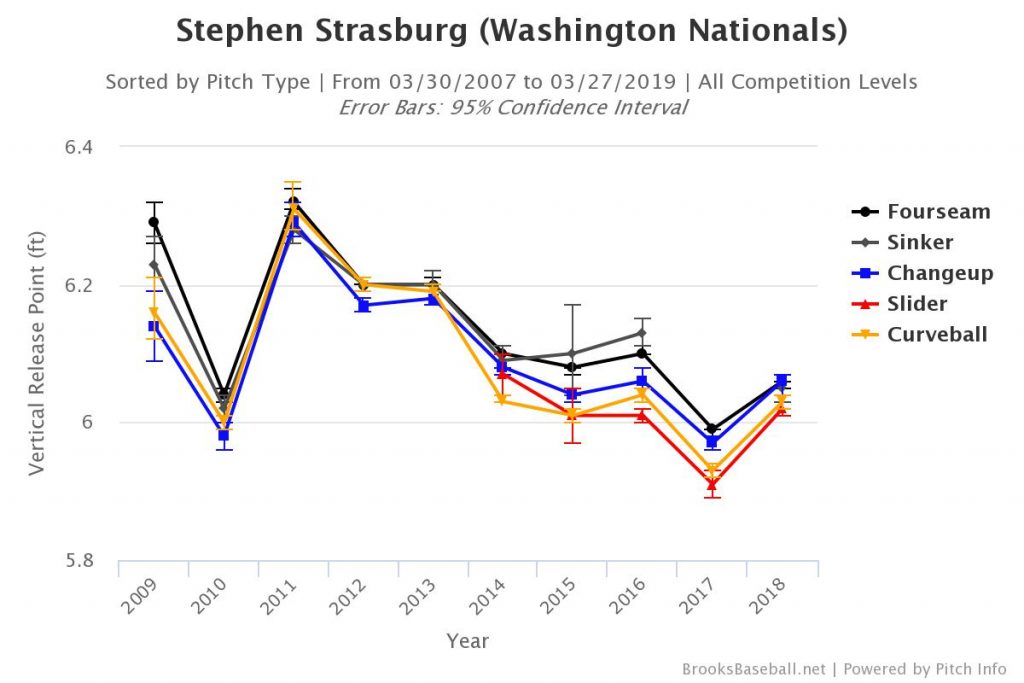 Conversely, Castillo’s charts were a bit of a mess in 2018 and frankly weren’t much better in 2017. 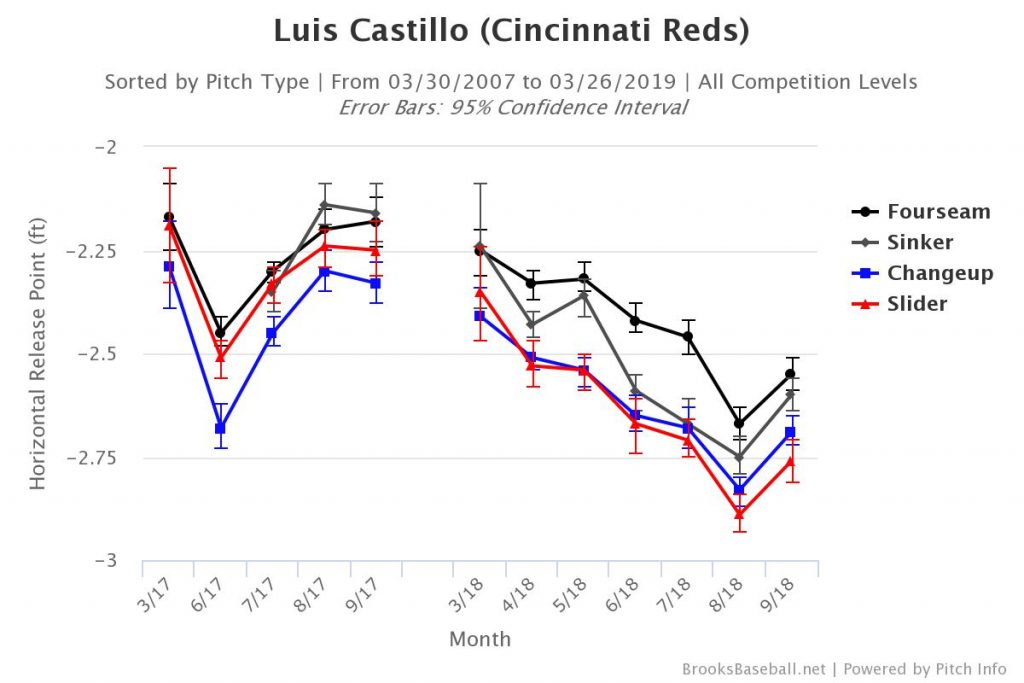 As his arm slot became more consistent between pitches toward the end of 2018, that’s when he had his best stretch of the season. It’s unlikely that’s a coincidence. Still, when we compare Castillo and Strasburg side by side, it’s clear to see how much more compact of an area Strasburg’s release points are confined to: 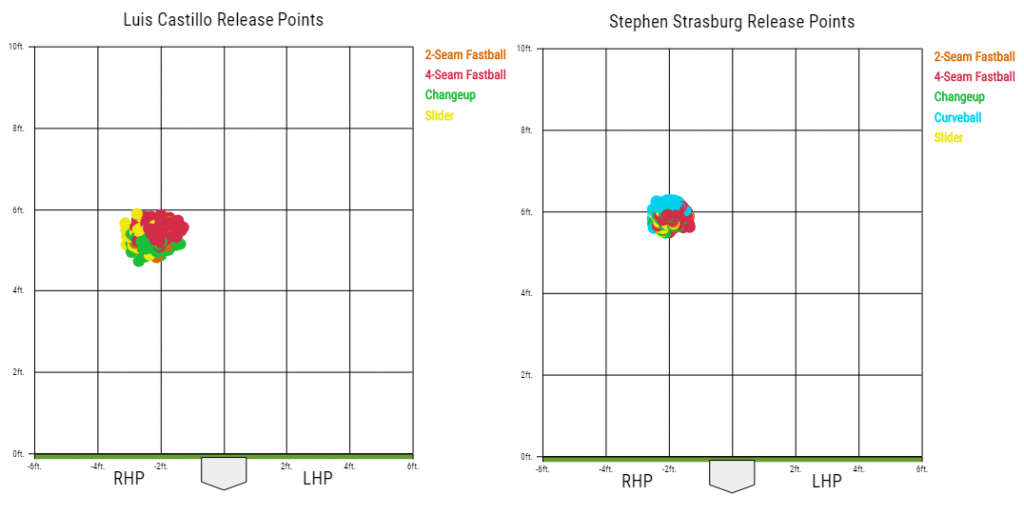 Castillo’s raw stuff can help him overcome some of his shortcomings with his arm slot, but it doesn’t solve everything. For example, his lower arm slot with his changeup can help hitters better identify it. This is particularly advantageous for left-handed batters because he rarely throws sliders to them (8.6% of the time in 2018). In pitcher’s counts when they can’t sit on a fastball, they can reasonably guess a changeup is coming and confirm that by watching Castillo’s arm angle. Lefties had a 24.8% whiff rate against his changeup in 2018 — still excellent but quite a difference from the 30.6% mark he had against right-handers. As further evidence, left-handers made contact on his changeup on 58.6% of their swings versus just 53.9% for righties.

It’s not uncommon for pitchers to find success once they establish a consistent arm slot. Luis Severino, for example, broke out in 2017 after a dreadful year in 2016. He carried over that success into 2018, and we can see his arm angle did not vary between the two seasons as much as it had prior to his breakout campaign. His slider notably dipped a bit late in 2018, which was a huge cause of his late-season struggles. 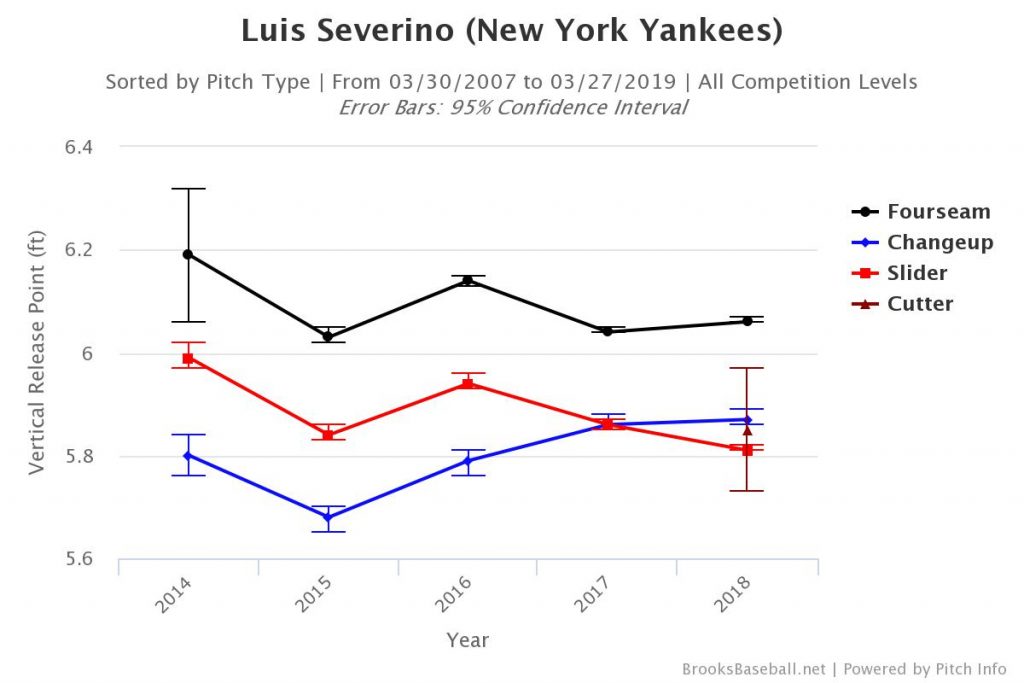 Finding a comfortable, consistent arm slot could yield similar results for Castillo, whose stuff is just as nasty as Severino’s.

Velocity and arm slot are crucial for pitchers. Few, though, can get by on that alone as a starter. Throwing several quality pitches is a must to achieve success. Castillo has a wicked changeup to back up his heater. The other pitches, his two-seamer and slider, are works in progress. We’ll dive deeper into this aspect of his game in next week’s post.