Then, to borrow a phrase from our friend Thom Brennanman, “all of the sudden” nothing was going as was supposed.

Joey Votto came roaring back over the offseason — joints, ligaments and resolve all stronger than ever. Billy Hamilton and Homer Bailey both found a new home in Kansas City, filling time for some other also-ran. And Nick Senzel proved a competent center fielder, the Opening Day starting center fielder many thought through Spring Training.

More importantly though, the Reds acquired Yasiel Puig, Alex Wood, Sonny Gray, Tanner Roark, and Matt Kemp, remolding their roster into one with a chance. David Bell took the reins and brought in Derek Johnson and Turner Ward, the Sonny Gray and Yasiel Puig whisperers respectively.

The Reds essentially took their blueprint that read “Do not open until 2020,” burned it, and picked up a copy of Drake’s “Nonstop” instead. All offseason, I imagine Reds staffers were treated to Dick Williams singing, “Look, I just flipped a switch (Nick Krall: Flipped, Flipped) / I don’t know nobody else that’s doin’ this.”

This season was supposed to be a throw-away, but the Reds threw away that plan and raised everybody’s expectations instead.

The only problem with great expectations is the ease with which they can be undercut. For a fanbase so accustomed to apathy and cynicism of late, any move, personnel decision or injury that undermines the plan feels like an instantaneous slide back to the bad times. Nick Senzel won’t be starting Opening Day? Scooter Gennett is hurt now? Might as well put Tim Adleman on the mound because what’s this all worth anyway.

Take a breath, everyone. Yes, I feel like Senzel should have made the Opening Day roster too, service time be darned. But before this past December, none of us credibly felt that he would. His absence in Cincinnati come March 28 will neither doom this season nor drastically change the fortunes of the franchise.

FanGraphs projects Scott Schebler, Senzel’s center field replacement, to produce a .327 wOBA in 2019. After Schebler hit the cover off of the ball all Spring Training, I believe it. It’s not like the Reds are slipping back down to Billy Hamilton levels of production, who is projected for a .281 wOBA, by keeping Senzel down. Senzel to Schebler defensively also likely represents a wash considering the former is out of position and the latter just ain’t that fast.

Then there’s the Reds other current doomsday situation: Scooter Gennett’s injury. A groin strain that will keep the Reds All-Star second baseman out two to three months seemingly paved the way for the club to backtrack and let Senzel onto the Opening Day roster. No chance, said Dick Williams in a few more words.

“(Senzel) is showing such good progress in center field and that’s so valuable to us that I’d hate to just give up on that plan and cut that short,” Williams said in a press conference after Scooter’s injury, a fair but unfortunate assessment.

Past the Senzel implications, Scooter out for so long seemingly takes a major bat out of the Reds lineup. The FanGraphs projections show Scooter recording a .326 wOBA in 2019 while his replacement, Jose Iglesias, only projects for a .296 wOBA. But if the Reds deviate from the stated course and start Derek Dietrich instead they only fall to a … wait, they climb to a projected .327 wOBA? My point is: Scooter is a great guy and an awesome second baseman to have, but his production is replaceable.

When Senzel does come up for good, this lineup likely becomes a juggernaut. The setbacks so far don’t change that fact, and they certainly don’t make the lineup ineffective in the meantime. They’re really just setbacks.

Last week, before Senzel’s demotion or Gennett’s injury, Chad Dotson wrote optimistically for Cincinnati Magazine about the Reds offseason and their sudden, supercharged rebuild. In particular, one paragraph stood out to me:

At a pivotal moment, with the Cincinnati Reds in danger of alienating an entire generation (or two) of fans, management took a huge first step toward rebuilding the trust they’d squandered over the last 25 years. There remains work to do to convince an apathetic fan base to return to the fold, but it’s hard to believe that the Reds could have done more to change the narrative in just a few short months.

The Reds haven’t squandered their rebuilt trust just yet with their Senzel shenanigans. They will still start Yasiel Puig on Opening Day. Jesse Winker will hopefully have a full season in the lineup this time around. Sonny Gray will take the bump over the weekend, following Luis Castillo and before Tanner Roark.

All of the reasons for excitement and great expectations are still in place; the Reds just need a moment to shake off the last vestiges of the lost season that was planned. 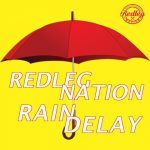 This season, Regularly Scheduled Rain Delay will be moving to a podcast format. Occasionally, I will include a new episode with my Tuesday morning weekly column. This inaugural Redleg Nation Rain Delay pod focuses on Luis Castillo as the Opening Day starter and my 3 Bold Predictions for the Reds 2019. As this is a work in progress, please leave any suggestions for future episodes in the comments below.