Welcome to Season 2 of Contracts for the New Core, a monthly series focusing on young Reds players that the club should sign, and some comparable contracts for similar players throughout history. Last year I wrote about potential contracts for Jesse Winker, Tyler Mahle and Anthony DeSclafani, among others. This year we have even more Reds players for whom an extension might make sense – including a rather controversial potential extension that is not only timely, but perhaps the smartest move the Reds could make at this point in the season.

The Reds should sign Nick Senzel to a long-term extension. I’ll be frank – the idea of this particular entry into the series was workshopped before the news this past weekend’s news that the Front Office would be optioning Senzel to AAA Louisville. The idea of the extension was to once and for all put an end to the question of where Nick would start the season for good by giving him not only a Major League contract, but one that is equivalent to his skill.

The decision to start Senzel in AAA for the year throws a wrench in this plan. If you follow me on Twitter, you’ll know that I don’t agree with the move in the slightest. Playing service time games with perhaps the most important player to move through your system since Jay Bruce is definitely a risky strategy–risky enough that I consider it a poor move. Yes, the Reds will likely gain an extra year of control for Nick Senzel at the end of his rookie contract. But what do you give up in exchange for that?

For one thing, it’s not even a given that the current loophole will be around when Senzel’s rookie contract expires. In fact, with the way the loophole has been obviously utilized by teams like the Blue Jays and the Cubs, the Player’s Association will surely place an increased effort to end this side-stepping of the rules once and for all.

Let’s throw this out the window though, and assume Nick Senzel plays baseball for the league minimum salary for the Reds for the maximum amount of time, and then enters arbitration. And yes, Reds fans, Senzel will now definitely be entering arbitration for three solid years. Take a look at Kris Bryant’s situation – very similar to Senzel, Bryant was a unanimous top 10 prospect, absolutely ready to make an impact on the Cubs roster as a rookie. The Cubs, very similar to the Reds, made up some bad excuse to keep Bryant down in AAA for the minimum amount of time to get an extra year of service time on his contract.

As guys like Eugenio Suarez, Aaron Nola, and Alex Bregman signing team-friendly extensions, Kris Bryant has fought tooth and nail with the Cubs every single year through arbitration, aiming to get the maximum amount of money possible through the process. He has refused to sign any kind of meaningful extension with the team, and has made his disappointment with service time manipulation very clear.

I can definitely see how, if we were playing a video game, or if the players were robots, this would be considered a savvy business move. But these players are real, and have real emotions. Just check out Nick Senzel’s agent’s response to the news. Let’s get one thing clear – that’s most likely Nick Senzel talking through his agent. Instead of working with Senzel and fostering a positive relationship with the club, the Reds have lied and cheated Senzel out of a roster spot on the big league club. I’d be shocked if Senzel didn’t take the same actions that Kris Bryant has and will take with the Cubs – no extensions, fighting tooth and nail through arbitration, and eventually leaping into Free Agency, where he will give some other team his peak seasons.

So, how do we solve this situation? If we “lose” a year of Nick Senzel by starting him on the Opening Day roster, but we ruin the relationship with him by playing service time games by sending him to AAA, which is the best option? The answer, of course, is Option C: Sign him to an extension now.

Signing a Prospect to an Extension? Impossible!

Long contract extensions for prospects with little to no big league experience is rare, but not unheard of. In fact, I touched on most of them in my plea for the Reds to sign Jesse Winker to a long-term extension last season. Contracts like Evan Longoria’s were clear home runs for the team, and the White Sox locked up top prospect Eloy Jimenez to a six year, $43M contract extension on the same day Nick Senzel was sent to minor league camp.

Of course, detractors will mention Brandon Larson, and if they’re a little more topical, Scott Kingery. I referenced Kingery’s 6-year, $24M contract extension in the Winker piece linked above, and used it as part of a model to create a potential Winker contract. Kingery far from lived up to the extension in his first season with the Phillies, floundering with a 62 wRC+ in 484 plate appearances. And yes, there’s always going to be that risk that a prospect flames out. But tell me this – if you’re so worried about Nick Senzel failing at the big league level, why place so much emphasis on clawing out an extra year out of his contract in the first place?

And guess what? Signing Senzel to an extension now also obviously gives you that extra year, and potentially then some. Sure, you aren’t paying him the league minimum, but there’s a good chance he wouldn’t command more than that. Let’s take a look at the breakdown of the Eloy Jimenez contract: 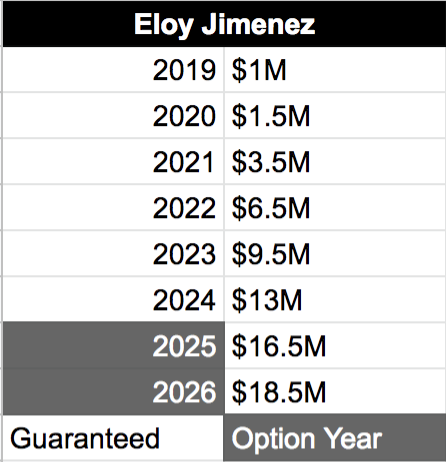 As you can see, only one year of the guaranteed money grants Jimenez more than $10M. That’s pretty cheap for a guy who profiles to be pretty dang good. Jimenez is currently MLB Pipeline’s #3 overall prospect. Nick Senzel is #6 on that same list. The difference between their projected outputs is minimal – the difference is the relationships the two players share with their teams.

I think if you’re the Reds, you love that contract for potentially your fourth best hitter. However, at this point, it’s more likely than not that the relationship between the Reds and Senzel is so fractured that there’s no way he’d sign it. So what solves problems like this? More money. The Reds can salvage their relationship with Senzel, but it will cost them.

So, what’s a contract that gives Senzel more money than Jimenez, but still makes sense for the Reds? Maybe something like this: 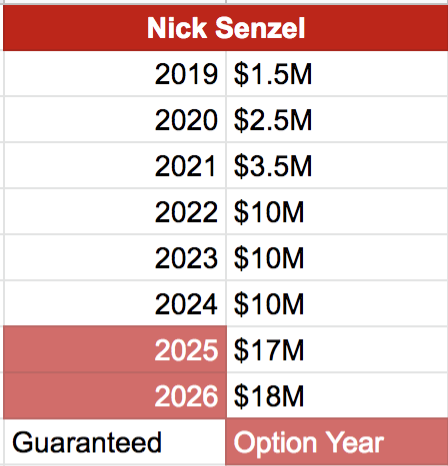 I’ll be honest – the likelihood that this contract comes to pass is slim to none. I firmly believe that now Nick Senzel will be a Red for as little time as he is contractually obligated to be. He’ll test Free Agency as quickly as he possibly can, and will refer back to these service time games at least once between now and then. Because of this, he’ll never reach his full potential in a Reds uniform, as he could have if the team had just been faithful to him and given him his due. Unfortunately, this is where we’re at, and this is our team. It doesn’t feel great rooting for them right now, to be completely honest. But I’ll be looking forward to the day Nick Senzel finally steps onto the field as a Cincinnati Red, and will root hard for him while he’s a member of our team.