Just under two and a half years ago, the Chicago Cubs were fresh off their thrilling, curse-breaking World Series victory over the Indians. Many people, myself included, saw it as the beginning of a dynasty. Surely at least one more championship would be in reach of such a young and talented core. Fast forward two disappointing seasons, including last October’s 0-2 record at home, and that next championship is now much more uncertain than it once was.

The Cubs are still a very good team and are certainly capable of playing deeper in October this season. After a bit of a reality check in 2017, the Cubs offense delivered another strong performance, just not as dominating as 2016. The pitching did not perform to 2017 levels and fell way below expectations, even after the off-season addition of Yu Darvish, as well as Jose Quintana’s first full season after the club acquired him at the 2017 trade deadline.

Below are National League rankings for offense (wRC+ and WAR) and pitching (FIP- and WAR) for the past three seasons.

The most notable offensive performance was that of former MVP Kris Bryant. His shoulder injury set him back a bit last season as his production struggled. After 2016 and 2017 wRC+ marks of 148 and 146, respectively, he posted a 125 last year, showing worse plate discipline and hitting for less power. Getting Bryant healthy and back to MVP-caliber production will go a long way for a team that relies on it’s offensive firepower.

Other under performers on offense were Wilson Contreras and Anthony Rizzo. Contreras’s down 2018 came with a drop in hard contact, as well as HR/FB from over 25% to 9%. Rizzo’s year was his worst since 2013, driven by a really bad April (32 wRC+). While both players had good years, it was still a step backwards considering how good they had been prior to 2018.

Luckily for the Cubs, Javier Baez decided to have a breakout season and picked up the slack for his fellow infielders. Javier maximized his very free-swinging approach and added significant power, boosting his wRC+ from a 98 to a 131. Paired with his standout defense, he posted 5.3 fWAR and finished 2nd in NL MVP voting.

The Cubs had some other key contributors throughout the season. Ben Zobrist also had a nice comeback year after a bad 2017, posting a 123 wRC+ in his age 37 season. Kyle Schwarber improved after his sophomore slump. Daniel Murphy provided a nice boost after coming over from the Nationals at the trade deadline.

It is no secret that pitching let the Cubs down last year. Had it not been for a savy pickup of Cole Hamels in July, things could have been even worse. Hamels posted a 2.34 ERA and 3.42 FIP, racking up 1.5 fWAR in just 12 games. For reference, in 32 games each, Jose Quintana accrued just 1.4 fWAR while Jon Lester did slightly better at 1.7 fWAR.

Lester’s struggles stemmed from declining strikeout and ground ball rates paired with rising HR rates. Quintana lost effectiveness in his breaking and off-speed pitches and could not keep the ball in the park with his fastball. While these performances certainly hurt, the biggest blow no doubt came from Yu Darvish.

Chicago signed Darvish to a 6-year, $126MM contract last February. With 5 strong seasons in Texas (including a half season in LA), Darvish proved he was a true ace, and the Cubs paid him to be theirs. But aging pitchers are often injury prone, and after pitching poorly for eight games last year, Darvish was shelved with right tricep tendinitis.

The one bright spot for the rotation was no doubt Kyle Hendricks. After a tough first half, Hendricks cut his walk rate in half and dropped his ERA by over one point and his FIP by nearly two points. After living in the shadows of Jake Arrieta and Lester in years prior, Hendricks was the clear ace for club in 2018.

The Cubs bullpen was good but not great. Steve Cishek led the group in innings. Pedro Strop led the team in Win Probability Added (WPA) and was also used in the highest leverage situations. Jesse Chavez, acquired in a separate July trade with Texas, posted 1.0 fWAR in 30 games for Chicago. Carl Edwards Jr. and Justin Wilson pitched well and but had very high walk rates and outperformed their peripherals.

Brandon Morrow was signed to be the club’s closer after a lights-out 2017 with the Dodgers. In 2018, he racked up a team high 22 saves and notched a career best 1.47 ERA. However, his peripherals were not as sharp. He also struggled with injuries and spent the entire second half on the disabled list.

In terms of pitching, the Cubs lost bullpen pieces Justin Wilson and Jesse Chavez to free agency. They made sure not to lose any starting pitching depth and picked up Cole Hamels $20MM club option. He probably will not be worth all of that, but he could come close if he can repeat his performance with the Cubs last year.

Daniel Murphy headed West and signed with Colorado for 2 years and $24MM. He served well in his rental capacity but the Cubs offense is still very strong and the club clearly did not see value in resigning him. Murphy turns 34 in April.

Addison Russell was at risk for being released after details of his domestic abuse became public. The Cubs, however, avoided arbitration and signed Russell to a one-year, $3.4MM contract. He is suspended for the first 29 games of the season for violating MLB’s domestic violence policy.

Daniel Descalso and Brad Brach. That should tell you how quiet the Cubs off season has been.

The Cubs payroll has continued to rise since they entered their competitive window in 2015. 2019 is projected to be a team-record, with projections around $210MM. Team owner Tom Ricketts recently stated in an interview that the team does not have any more money. While that is clearly hyperbole for a team worth over $3 billion, this follows the trend we have seen around the league. Owners are less willing to spend big money on free agents. And considering the Yu Darvish contract is fresh on their minds, it makes sense the Cubs were mostly silent this winter.

With Descalso, the former St. Louis Cardinal, the Cubs now have a stop-gap until Addison Russell returns from suspension. After that, the utility infielder is locked up for two seasons as a depth piece. Descalso posted career numbers last year in Arizona (even with the humidor) thanks to increased walk and fly ball rates, and a huge drop in ground balls. The 190-pound infielder has clearly evolved his swing and found more power, hitting exactly as many home runs the past two years as he did his first six.

Brad Brach is a 32-year old reliever who spent four and a half seasons in Baltimore then was traded to Atlanta last July. He is a solid pickup for one year, $3MM and should add back some depth after losing Wilson and Chavez.

A quick glance at the Cubs farm system is all one needs to realize there is not a lot to get excited about in terms of minor league prospects. After five consecutive top 10 draft picks from 2011-2015 that the club did very well with (Baez, Almora, Bryant, Schwarber, Happ), the Cubs had no first-rounder in 2016 and were high 20s the past two seasons. Depending on the site rankings, the general sense is the Cubs top prospect, catcher Miguel Amaya, lands in the top 100 of all baseball. Numbers two and three, both earning 50 FV from FanGraphs, fall somewhere in the top 125, give or take. The list of Top 10 prospects from FanGraphs is below. 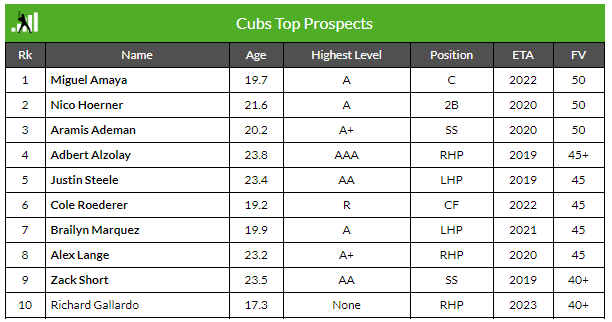 FanGraphs also has a method of valuing farm systems from a monetary standpoint, based on comparable players and how they performed in the majors. Doug Gray took a look at this for the NL Central back in December. The takeaway here is that Chicago, St. Louis and Pittsburgh are all clumped at the bottom while Cincinnati and Milwaukee are clearly in another class. Chicago does have a glaring lack of value coming from pitchers ($11MM of $162MM total), meaning there is not much help to the major league pitching staff that will be coming from the farm. If Chicago is going to turn the pitching around, it will be up to the current group to improve and the front office to potentially bring in more support.