The Pirates 2019 payroll currently sits at 29th in the MLB, just shy of $59 million. Despite their payroll limitations, they will still field a very competitive team in 2019. They have a lineup full of slightly above average hitters to go along with a sneaky good pitching staff.

(Note: Rosters listed are from the latest MLB.com Opening Day predictions and ZiPS projections are used in each table.) 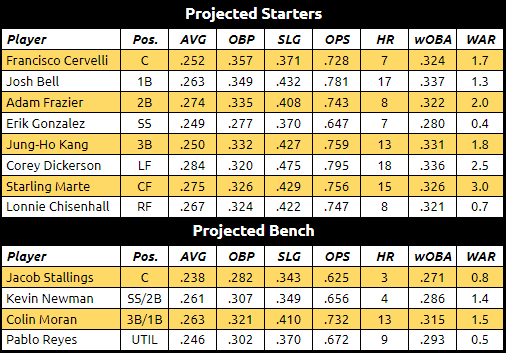 The Pirates offense certainly lacks a great hitter, but they are full of average to above average guys. Francisco Cervelli at 33 years old continues to defy the odds behind the plate. Corey Dickerson turned out to be a great pickup last year and is now a near projected .800 OPS guy. The Pirates are hoping that this can be the year that Josh Bell can break out for them. Melky Cabrera is also a non-roster invite that could make the opening day roster.

The big wild card for the Pirates is Jung-Ho Kang. He has a career 129 wRC+, but outside of 3 games at the end of 2018 has not appeared in the big leagues since 2016. Kang had some legal troubles which got his visa revoked. Kang is only 5 for 28 this spring, but all 5 of his hits have been home runs! Kang was just announced by manager Clint Hurdle as the starting 3B along with Erik Gonzalez at SS. 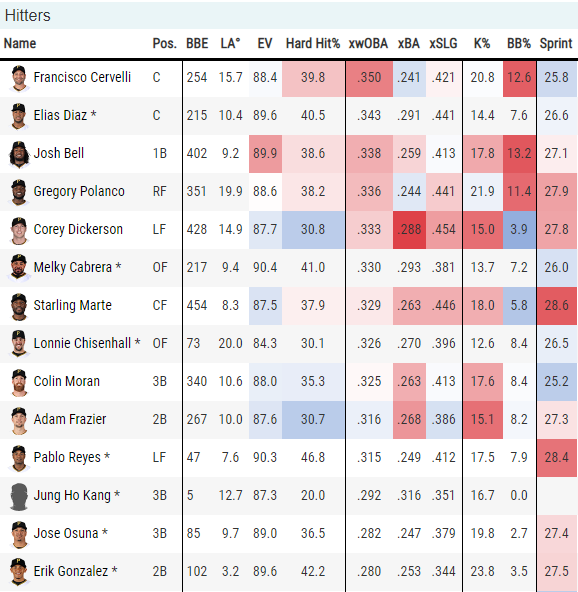 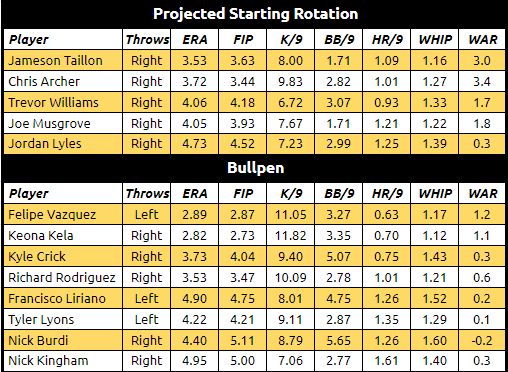 The Pirates rotation has a chance to really be a major strength for this team. They also have their top prospect, Mitch Keller potentially ready at some point this season to bolster it. Chris Archer has had an ERA the last three years that was significantly higher than his FIP, so could this be the year his luck bounces back? Keona Kela was the Rangers closer when the Pirates traded for him last summer and he has nasty stuff. He should be a great setup guy for Felipe Vazquez.

The Pirates are counting down the days until Gregory Polanco will return to the lineup. He was having a really good 2018 season (.254/.340/.499, 123 wRC+) before being shut down for shoulder surgery.

The Pirates certainly have the potential to be competitive, but it is difficult to see this team having the upside to really compete for a division title in a loaded division. The Pirates have managed to stay competitive despite a slim payroll, but could this finally be the year they fall behind the Reds in the NL Central basement? The Pirates have gone eight consecutive years without a last place finish.