[I’m pinch-hitting on the Game Preview today for Doug who is on the road somewhere between Colerain and Goodyear.]

Tanner Roark was terrific, with 8 Ks and 0 BBs in 5 shutout innings. Video highlights of Roark’s Ks. Bobby Nightengale (Enquirer) on Roark’s performance. Cody Reed threw a shutout inning, but walked two. Brandon Finnegan gave up two hits, two walks and four earned runs in .2 innings of work. Yes, Finnegan (who has more major league service time than Scott Schebler or Jose Peraza) has an option left. Nick Senzel was 1-3. Kyle Farmer was 1-2. Jose Peraza had a hit. Yasiel Puig had the Reds’ only extra base hit, a double, against his former team. The Reds deployed their 4-across OF shift several times last night.

Votto was playing in the B game against minor leaguers yesterday on the back field. He hit a pop-up to third base (a rare outcome for him) and Votto sprinted down the first base line and ended up at second when the 3B misplayed it. C. Trent with the video receipts. “It’s a great example. The other reason I didn’t want to make a big deal out of it is because he does it all the time. That’s who he is. I don’t need to bring a lot of attention to it, but it is worth complimenting because that’s just nice. There’s only a few people who can set that strong of an example when everyone’s going to be watching. He took advantage of it.” – Manager David Bell

The Reds take on the Texas Rangers this afternoon at Goodyear Ballpark. The game will be broadcast on Fox Sports 1360 WSAI-AM radio (not WLW as had been published) in Cincinnati. You’ll have to wait until tomorrow to see the Reds broadcast on television.

Anthony DeSclafani takes the mound as the Reds starter. It’s his fifth appearance this spring. DeSclafani has struck out seven and walked two in 9 IP. Jesse Winker leads off a lineup that begins with four left-handed batters. The Reds face Rangers SP Shelby Miller.

Here is a graphic from Baseball Savant with Statcast metrics from the 2018 season for the Reds starting lineup. Note red shading = great and blue shading = poor based on league average. Jesse Winker, Phil Ervin and Blake Trahan didn’t have enough plate appearances to qualify for the red and blue shaded box treatment. 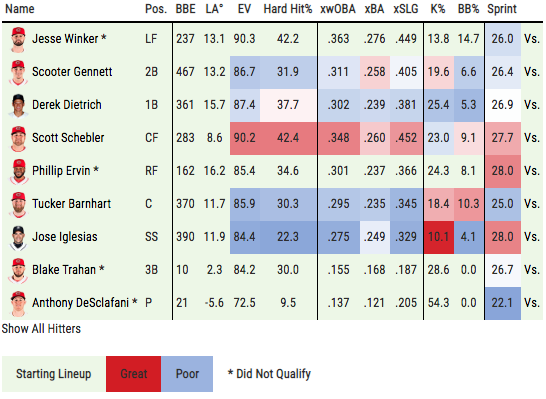 Here is the Rangers batting order today with the same Baseball Savant metrics: 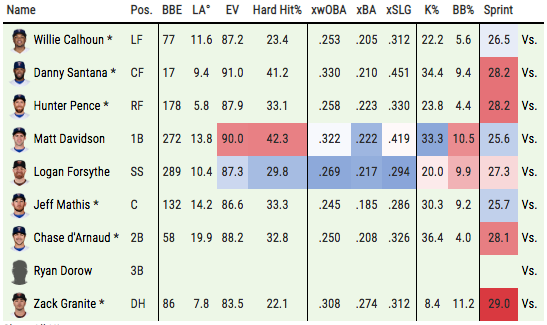 Note: The Rangers are using a DH, while Anthony DeSclafani is batting for the Reds.