Hello Redleg Nation and welcome to 2019 Reds baseball. I may not be Ty Pennington but I wanted to use my first post this year to take a look at one of the most revamped units on this Reds squad: the outfield. Last June I wrote about the rock bottom depths of offensive production that the team has gotten from the outfielders, which included this extremely telling and depressing graph. 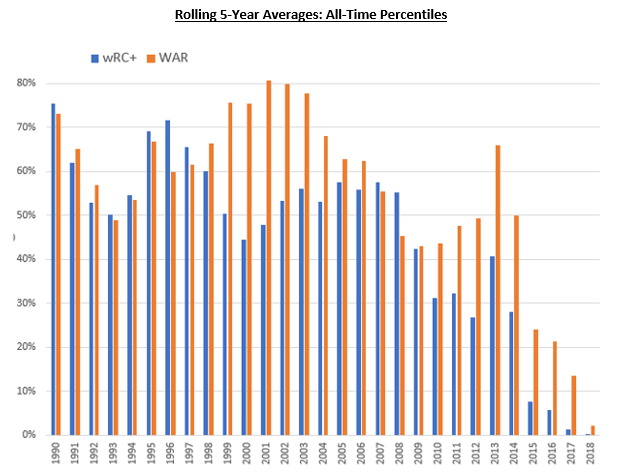 This graph is essentially saying that the 2014-2018 outfielder produced the 4th lowest wRC+ in baseball history over a 5-year span. WAR tells a slightly better story thanks to the defense, but not by much.

For all the talk of the 4-man rotation to start 2018, an Adam Duvall decline/trade paired with Jesse Winker and Scott Schebler injuries left last season’s group in much worse shape than expected. And not to put all the blame on Chad’s adulthood hero, but Billy is the common denominator across this entire time frame.

Looking ahead to this year, however, Billy no longer plays for the Reds. It was a somewhat surprising move given there is not a true replacement on the current roster, but it signaled a new direction for 2019. And while most of the focus this off-season was on improving the pitching, the front office did not forget about the outfield. They made some key acquisitions, as well as an internal move, to give the outfield a much needed refresh.

The headline acquisition from a position player aspect is undoubtedly Yasiel Puig. Puig had always been a love-him or hate-him type of player. But now that he wears the wishbone C, he is much easier to love, especially after looking at his numbers. No, he is not going to hit like his first season and a half (160 and 147 wRC+, respectively). And yes, he has had some struggles and injury issues the past few years. But through all the ups and downs he still holds a career slash line of .279/.353/.478/.831, which is good for a 129 wRC+. His ZiPS projection for 2019 is a 118 wRC+ (one of the more conservative projections) along with 2.7 WAR.

Without even going into his defensive value (he has a laser arm) or his entertainment value (bat flips and bat licks), Puig is a great addition to a Reds roster that was in dire need of a refresh. He may not be a long-term solution as he is in his final year of team control, but he will almost certainly make a positive impact in 2019.

Another new face to the outfield came over in the same trade as Puig, and that would be Matt Kemp. Kemp is a bit of a different story, entering his age-34 season as a 13-year veteran. He has had his ups and down as well, including his first below average offensive season in 2017 with Atlanta. He followed that with a comeback reunion in Los Angeles last year, posting a 122 wRC+ in over 500 plate appearances.

While Reds fans should not expect quite that level of production, Kemp has shown good durability and few signs of serious aging decline. His defense and base running will not be good, as shown in his ZiPS WAR projection of 0.1. His offense, however, should still be above average, especially if he can hit the ball hard and keep it off the ground as he did in 2018. The move to GABP will only help his cause there as well.

Another (potential) addition to the group came not from another team, but from another position group. Nick Senzel has been working in the outfield and is trying to join the committee or possibly even replace Billy Hamilton as the starting center fielder. Despite not having any previous experience in center, our own Doug Gray thinks that Senzel can handle the defensive aspects of the job. New skipper David Bell has also been supportive and stated that it is “very possible”, even more recently doubling down and stating that Senzel “has the ability to do it”.

Meanwhile, Senzel’s offense is not in question. He could be anywhere from good to Joey Votto (okay, maybe not that good). He has torn up the minors the past two-plus seasons despite missing substantial time due to injury. ZiPS projects a modest but solid rookie campaign to the tune of a 108 wRC+ in over 330 at-bats. But if things break right for Senzel in 2019, it is very possible to see him in the running for Rookie of the Year. And if he does end up in the Reds outfield, it will add another new face with a potent bat.

In regards to the returning outfielders, Jesse Winker and Scott Schebler are both poised to make contributions through somewhat different roles. A healthy Winker is projected to post a 116 wRC+ (another conservative projection) and should be starting every day. Though there was a dip in power last year, his .405 OBP and BB/K rate of 1.07 are truly Votto-esque and highlight an ideal hitting approach. With Duvall and Hamilton gone, Winker should be a staple in the corner outfield.

Scott Schebler is no slouch himself and projects to be good for slightly above average offense. He has had some very strong stretches of play in prior years but has also been affected by injuries that led to prolonged slumps. While his role might diminish slightly with the additions of Puig and Kemp, he will still get a chance to be a key contributor.

A Much Improved Unit

It is quite a different story from a year ago, and it is one that will surely bring massive improvements to a previously detrimental aspect of the team. This doesn’t even consider the possibility of utilizing Michael Lorenzen as a position player, an idea that has gained traction after his strong performance at the plate last year. All in all, the numbers are very promising for this overhauled group. 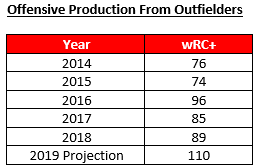 By combining all the ZiPS projections for potential outfielders, 2019 has the potential for a nearly 25% improvement over 2018. The Reds outfield will be better and could be, even without Billy Hamilton, more fun to watch as well.