When you think of the weapons on what should be a high-powered Reds offense in 2019, your mind likely wanders to Joey Votto, Eugenio Suarez, Yasiel Puig, Scooter Gennett, or even Jesse Winker. The lineup could become even more powerful if the team acquires J.T. Realmuto. With big names stealing the attention, it’s easy to forget about the shortstop who has long been considered a light hitter.

But is that stigma still fair for Jose Peraza?

Coming into 2018, Peraza had a lot to prove to become the shortstop of the future. He had hit just .259/.297/.324 with a 61 wRC+ the previous season, lacking both the patience and power of an impact player at the plate. This wasn’t necessarily anything new; Peraza’s calling card was always his hit tool and speed. In his entire minor-league career, he hit only 11 home runs in 2,343 plate appearances. He knocked only eight long balls in his first two-plus big-league seasons. A power breakout seemed improbable at best.

Jose Peraza out-homered Joey Votto. That’s a sentence nobody inside or outside the organization ever thought would exist unless Votto was injured for a long period. En route to a .288/.326/.416 slash line and 97 wRC+, Peraza hit 14 home runs, nearly doubling his career major-league total. He added 31 doubles, an enormous leap from the nine he hit in 487 plate appearances in 2017. While the power output seems meager compared to other sluggers around the league, it changes the view on Peraza — if he can sustain it. Even if he’s a league-average hitter moving forward, that’s certainly better than being a liability.

It’s easy to look at his career numbers and assume last year was a fluke. But that would ignore the fact that Peraza was only 23 last year and sometimes players — especially contact hitters — just don’t develop power until later in their 20s. The best current example is Jose Altuve, who never hit more than seven home runs in a season before breaking out for 15 in 2015. He followed that up with a pair of 24-homer seasons. It’s wishful thinking to believe Peraza will top the 20 home run mark at any point, but writing his 2018 outburst off because of his past alone is negligent.

Still, just because other players have found their power stroke after a few years in the big leagues doesn’t mean Peraza will. Examining the batted ball data can provide a better idea about whether his performance is repeatable.

His hard-hit rate took a significant jump from 21% in both 2016 and 2017 to 29%. While it still puts him well below the league average, it takes him out of the territory of Billy Hamilton and Dee Gordon, two hitters who rarely go deep. It puts him into the range of batters such as Andrew Benintendi and Willson Contreras who can pop between 10 and 20 home runs in a season.

Statcast, however, did not record as high of a jump in hard contact for Peraza. This tracking system recorded Peraza’s hard-contact rate at 23.5% in 2018 compared to 20.0% in 2017 and 23.2% in 2016. That said, it’s not a one-for-one comparison between the BIS and Statcast. BIS has not publicly revealed what exactly constitutes hard contact. Statcast designates any ball with an exit velocity of 95 mph or more as “hard” contact.

Predictably, the Statcast data is underwhelming in terms of exit velocity as well.

While he did hit the ball harder than he did in 2017, it wasn’t even an improvement on 2016, a year in which he hit just three dingers. His average exit velocity still put him in 315th out of 332 hitters with 150 balls put into play.

It’s worth noting, though, that Peraza’s power didn’t really show itself until the second half of the season. He hit only five homers in 403 plate appearances before the all-star break; he mashed nine of them in only 280 plate appearances afterward. Did he make a change midway through the season that helped him tap into his power?

According to Peraza, he simply started using his legs to generate more power:

“[Hitting coaches] Tony [Jaramillo] and Don Long asked me, ‘How many home runs did you hit in the Minor Leagues?’ My best one is [four] homers. [They said,] ‘You can hit, I think, more, because now you’re working to use more of your legs.’ I think that’s the reason.”

When you compare Peraza’s swing from the month of April to one from September, the difference is clear. First is a swing from a game on April 27:

Spoiler alert: the result is the same in both at-bats. He hits a home run to left field. The approach, however, is quite different. In the April homer, it’s clear his swing relies more on arms rather than his lower half.

Now look at the difference between that swing and one from August 18, when he hit one of the hardest balls of his big-league career (105.9 mph):

You can see a clear effort to bend his knees and drive off his back leg more. This shifts more weight to the front leg and results in an even harder-hit ball. He also appears to start his stance with more bend in his knees — perhaps as a way to remind himself to load up and use his legs more during the swing.

The camera angles are a bit different in each ballpark, but it appears he maintains more bend in his knees as the pitch comes to the plate in the August video. He keeps more weight planted in his back leg and can drive through the ball with more power.

Notice how his stance at the start of the pitch is lower. This also helps him keep the weight on his back leg earlier in the at-bat, giving him more time to get his plant leg down and put a good swing on the ball rather than trying to do it all as the ball is halfway to the plate.

The change seems to have started in June. His average exit velocity sat at 81.7 mph in April and May combined and bumped up to 85.0 mph from June through September. From June on, he managed a 31.5% hard-contact rate per BIS and a 25.6% rate per Statcast. That’s quite a jump from 25.6% and 19.6%, respectively, in the first two months of the season.

As logic would tell you, he started barreling the ball up more often. Prior to June, he put the barrel on only 1.5% of all balls he put into play. That jumped to 3.0% the rest of the season. Yes, he had just 14 total “barrels” the entire season. That rate of barrels per batted ball still ranked 170th out of 186 players with 300+ balls put into play. But over half of those (9) came in August and September alone. That put Peraza at a 4.6% barrel rate for those two months, which was 121st of 190 batters with at least 50 batted ball events — a much more respectable placement.

Still, that’s a small sample size and his hard-contact rates ranked in the bottom half of the league. While he hit the ball harder more consistently, he didn’t become Aaron Judge. The improved-but-still-not-great hard-contact data could point to a fluky home run total. But it again doesn’t tell the whole story. Namely, it leaves out the fact that Peraza shows far more power when he pulls the ball or goes up the middle.

All 14 of his home runs in 2018 went to left or left-center. In fact, he doesn’t have a single opposite field home run in his big-league career. Here’s the spray chart: 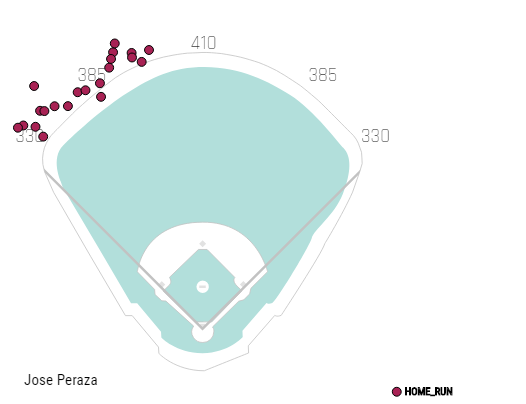 That’s no coincidence, either. Peraza hits the ball significantly harder when he pulls it to the left side of the field — as most hitters do. Take a look at his average exit velocities and hard-contact rates in each area of the field in 2018:

While the difference is stark, the exit velocities aren’t particularly exciting until you look at the way they went up as the year moved on — especially to the pull side. 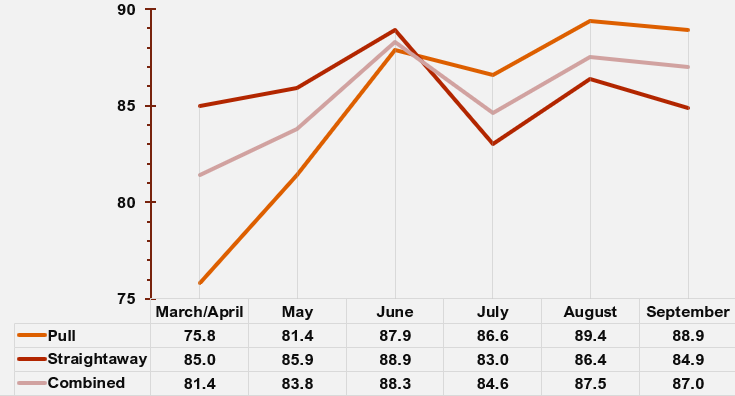 This isn’t to say Peraza needs to start pulling everything. That’s not his game. Despite the power surge, he didn’t alter his approach and start trying to put every pitch over the left-field fence. His pull rate stayed fairly level (around 32%) throughout the season until an uptick in September. But this improvement does show that he’s more than capable of hitting the 15-homer mark every year with his newfound swing.

Considering where Peraza was two years ago — he had the lowest isolated power in baseball in 2017 — this is an enormous development for the Reds. Peraza looked like a clear weakness in the lineup at the beginning of last year. He went on to post a 97 wRC+ for the season, which is slightly below the overall league average but better than the average shortstop (95 wRC+). From April 5 through the end of the season, he was an above-average hitter (101 wRC+). From June onward, he took it up another level (114).

And there’s still room for Peraza to get even better. He’s only 24 years old and won’t turn 25 until the end of April. He already made the adjustment to get more power out of his swing. He’s also among the hardest hitters to strike out in baseball. Hitting the ball harder more consistently will only improve his game given his high contact rate. The next step is learning to lay off pitches outside the strike zone and take more walks. Being more selective will also allow him to wait on pitches he can drive, which may help him further tap into his power.

For a No. 7 or 8 hitter, the Reds would certainly take that.