In the process of researching the book, Chris Garber and I dove deep into newspaper archives. This piece from the Enquirer, in which Marty was described as a “cheerleader,” was a delightful find. 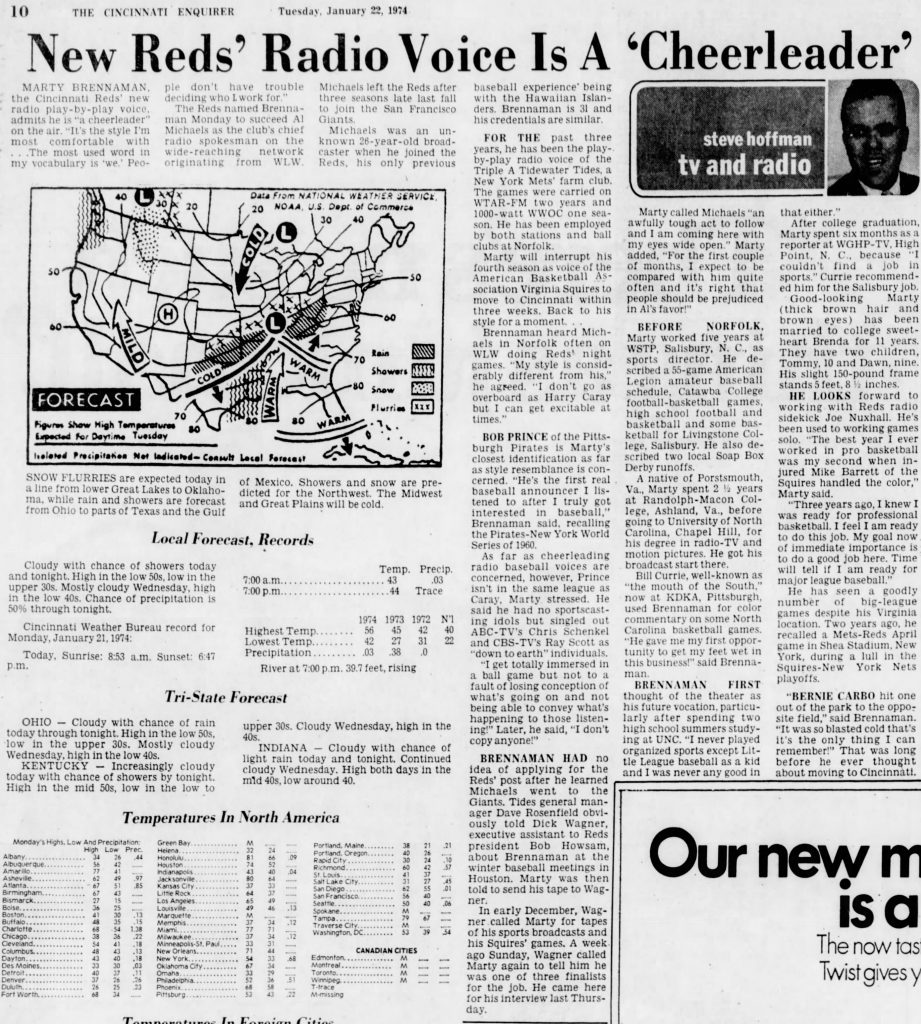 One of my favorite chapters in the book was the one titled “Marty & Joe.” Here’s how we described Marty’s introduction to Cincinnati.

Early in 1974, Marty Brennaman traveled up I-75 from Cincinnati to meet the Reds off-season media caravan in Dayton. A 31-year-old Virginian, Brennaman had been doing play-by-play for ABA basketball and minor league baseball games when he was hired by the Cincinnati Reds to join their radio booth.

One of his first duties in Dayton was to have publicity stills taken at a local photo studio. As he opened the door, he saw Joe Nuxhall sitting there. After a fine career as a Reds player, Nuxhall had joined the Reds’ broadcast team in 1967 and he was eager to meet the latest young play-by-play guy who would be his broadcast partner — the fifth different partner in eight years.

Marty thrust out a hand in Joe’s direction. “I have your baseball card,” Marty said.
And thus, a legendary partnership was born.

“From that moment on, we developed a one-of-a-kind relationship,” Marty said. That bond would be cemented a month later, when the pair began broadcasting games from spring training in Florida.

Brennaman was taking the place of the very popular Al Michaels, who had moved on to the San Francisco Giants’ radio booth. Marty would later admit that he was feeling the pressure. The first spring game went well; Brennaman gained confidence, and he and Nuxhall seemed to work well together.

The second game was at Al Lopez Field in Tampa. As they went on the air, Brennaman opened the broadcast by welcoming listeners to “Al Michaels Field.” He recognized his Freudian slip immediately, and looking to his right, he could Nuxhall convulsing with laughter — the old lefthander nearly fell out of his chair.

Brennaman quickly went to a commercial break. “I was embarrassed almost to tears,” he said. “And [Joe] shows me no mercy.”

Nuxhall, still laughing, slapped Brennaman on the back. “I’ll be damned. We haven’t even gotten to the regular season yet and I’ve got material for the banquet circuit next fall!”

“What the hell do you do for an encore after that?” he asked.

Marty had quite a few encores after that auspicious beginning, eh? He will be missed.