The blockbuster trade with the Dodgers was a move Reds fans have been waiting for since the rebuild began. It was a sign the front office is serious about competing in 2019 and will make the moves necessary to improve the club. While Alex Wood fills a void in the starting rotation, the deal didn’t fill all the holes on the roster. The most glaring one that remains outside of acquiring an ace is in center field.

The Billy Hamilton era is over, and there aren’t any obvious candidates on the roster to replace him. Taylor Trammell is a possible center fielder of the future, but he has yet to play above High-A. Until he’s ready for the big leagues, who will be the quarterback of the outfield? Nick Senzel will certainly get a shot. Scott Schebler has played there during Hamilton’s off-days the last two seasons. Whether either player can handle the position on an everyday basis is up for debate.

The trade with the Dodgers introduced another candidate into the mix in Yasiel Puig. For the majority of his career, Puig has been a right fielder. He has, however, logged some time in center. Granted, he hasn’t played the position since 2016 and hasn’t had any significant playing time there since 2014. While he doesn’t have the recent experience at the position, he does have the athleticism to play it. Can he handle it on an everyday basis, or does his defensive skill set suit him for a backup role similar to the one Schebler played for the Reds in 2018?

Aside from shortstop and catcher, no position is more important and difficult to play than center — even if Hamilton made it look elementary for the last five years. A few important components go into playing center field well. Speed and a good first step make up a player’s overall range and determine his ability to track down balls in the largest area of the park. Because a center fielder is further away from home plate, a strong throwing arm is a plus as well. How does Puig measure up in each of those categories?

The best calculation of foot speed comes from Statcast. Although it’s calculated on the basepaths, it provides a fairly accurate estimation of a player’s ability in the field as well. Because there are many situations when a player isn’t in an all-out sprint on the bases, it attempts to measure only those plays where maximum effort is given. That essentially boils down to two plays: a weakly hit grounder that the hitter has to run out and a run of two bases or more (excluding home runs and runs from second to home on extra-base hits).

This is similar to the effort an outfielder has to make to chase down a fly ball at the wall or a line drive in the gap. Thus, it gives a solid baseline to gauge whether Puig has the raw speed to hack it in center field.

Playing in a small outfield would further help Puig if he was moved to center field in 2019 and cover up some of his deficiencies. Great American Ball Park ranks in the bottom half of all MLB stadiums in terms of both overall outfield area and center field area. There’s less ground to cover, which can make up for a lack of elite speed. The Reds tried a similar experiment with Shin-Soo Choo back in 2013 that went well. The idea was that Choo would provide more than enough value at the plate to offset his below average defense in center. Could the team take a similar approach with Puig in 2018?

Straight-line speed helps, but it clearly isn’t everything. Inciarte has won three straight Gold Glove awards without elite speed. Mallex Smith is one of the fastest players in the game but is merely an average center fielder. Good range also means reading the ball off the bat and having a quick first step. While there’s no publicly available data that shows the average reaction time from each fielder, several metrics can give an idea.

The most commonly known defensive metrics are UZR (ultimate zone rating) and DRS (defensive runs saved). Both are used to measure a player’s range relative to others at his position. These metrics were split on Puig’s ability as a right fielder in 2018 (-3.6 UZR, 6 DRS). In 2017, however, he was a Gold Glove finalist at his position with a career-best 18 DRS and 11.8 UZR. That season, unfortunately, seems to be an outlier given his career results and regression in 2018.

UZR and DRS don’t paint a full picture of a player’s defensive ability for two reasons. The metrics often disagree because of the way they’re calculated, and they only compare the given player to others at his position. That means we can’t gauge Puig’s overall range and, thus, his ability to play center field from those stats. He has only 500 innings of time in center field during his career, and they’re so spread out between seasons that using the DRS and UZR data would be a fruitless venture.

Outs Above Average can fill in some of the gaps. It’s a relatively new statistic introduced by Statcast and compares a player to all outfielders rather than positionally.

“Outs Above Average (OAA) is a range-based metric of skill that shows how many outs an outfielder has saved over his peers, accounting for not only the number of plays an outfielder makes (or doesn’t), but also the difficulty of them.”

OAA is particularly helpful in determining whether Puig can man center field day in and day out. Unlike UZR and DRS, it does not account for position. Instead, it compares a player’s range to all other outfielders, regardless of position. That makes OAA useful when trying to determine a player’s overall range and whether they could play the most important position in the outfield.

The tracking system calculates the statistic by using Catch Probability, which is the likelihood a fielder will make a catch based on the time needed to get to the ball (the measurement starts when the pitcher releases the ball), the direction they’re moving, and the distance they need to cover. Thousands upon thousands of plays (i.e., data points) are used to calculate this percentage and make it as accurate as possible.

So how does this figure into OAA? If the Catch Probability is 45%, the fielder will gain .55 “points” toward their Outs Above Average measurement should they make the play. If the fielder doesn’t fails to make the catch, they lose .45 points. A running total is kept throughout the season for each outfielder.

For context, let’s look at where some notable players ranked last year. Inciarte and Harrison Bader were the league leaders last year at 21 OAA. Hamilton was fifth with 16. Schebler was considered average with 0 OAA.

That brings us to Puig and to the first big strike against his ability to play center field. He came in at -5 OAA for the season, which puts him in the neighborhood with Jesse Winker (-6). Winker’s sprint speed (26.0 ft/s) is nowhere near Puig’s. What conclusions can we draw from this? Either Puig is slow to get a read on fly balls compared to his peers, or it takes him a while to reach his maximum speed. In other words, his first step isn’t quick and can prevent him from reaching balls with a lower catch probability.

Statcast also breaks this metric down into segments based on direction. Naturally, some outfielders are better than others at catching balls directly behind them. Some thrive at racing into the gaps to rob extra-base hits while others struggle. Directional Outs Above Average breaks each player’s range down into six segments to give a more precise look at their abilities: in, back, in left, back left, in right, and back right.

For reference, here’s what an elite center fielder’s (Inciarte) directional OAA looks like in each direction: 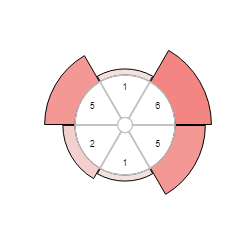 Inciarte is elite at moving to his right and cutting off balls headed for the gaps. He’s above average but not elite moving in other directions.

And here’s Puig’s performance in right field, a position that isn’t nearly as difficult to play: 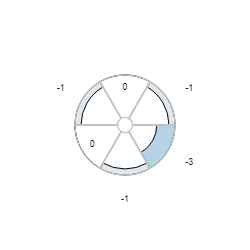 There’s another reason to wonder whether he can handle center field. Puig’s OAA in every direction was average or below average. It’s hard to read much into the back right measurement because a right fielder doesn’t have much ground to cover in that area. But the lackluster numbers in other areas aren’t promising.

Almost any way you slice it, Puig has one of the strongest throwing arms in the game. This aspect of his defense would play well in any position.

The Reds wouldn’t miss a beat in this area. Hamilton has one of the strongest arms in the game and is among the league leaders in outfield assists every year. Puig is always on that list as well. Since 2013, the year of his debut, he’s 10th among all outfielders in assists with 49. He ranked ninth in 2018 with 10 assists.

While there aren’t many advanced metrics for arm strength, Puig rates highly in the ones available. Outfield Arm Runs (rARM) calculates how many runs an outfielder saves by throwing runners out or preventing them from advancing to the next base. Puig also ranks 10th in this metric since breaking into the majors in 2013 (18).

Just as Schebler and Senzel aren’t obvious answers in center field, neither is Puig. The Reds should explore the possibility, as Puig’s athleticism could make him a passable defender in the most vital outfield position. Any shortcomings would become easier to overlook if he can produce at the plate. However, it’s questionable whether he possesses the natural instincts and first step to man the position on a daily basis. With his arm strength allowing him to throw runners out at any base, he figures to stay in right field with the Reds — although it wouldn’t be a shock to see him fill in from time to time if the Reds want to get Puig, Winker, and Matt Kemp in the lineup at the same time.