The Cincinnati Reds made two trades in the past ten days. The first brought pitcher Tanner Roark from the Washington Nationals. The second delivered Matt Kemp, Alex Wood, Yasiel Puig, Kyle Farmer and a pile of cash from the Dodgers.

If you bracket out the swap of bad contracts (Homer Bailey for Kemp), what’s left of the two agreements is a common strategy. In both trades, the Reds exchanged second- and third-tier prospects for valuable major league players with one year of team control.

Our outsized excitement over these one-year guys reveals just how starved Reds fans have become for offseason moves that matter. No offense meant to the likes of Marlon Byrd, David Hernandez, Blake Wood or Gossington, but it’s been a while.

Let’s put emotional rescue aside and attempt a dispassionate look at what the two trades mean. The most important result may surprise you.

Before the trades, the Reds had about $95 million committed to payroll. Here’s where things stand today. 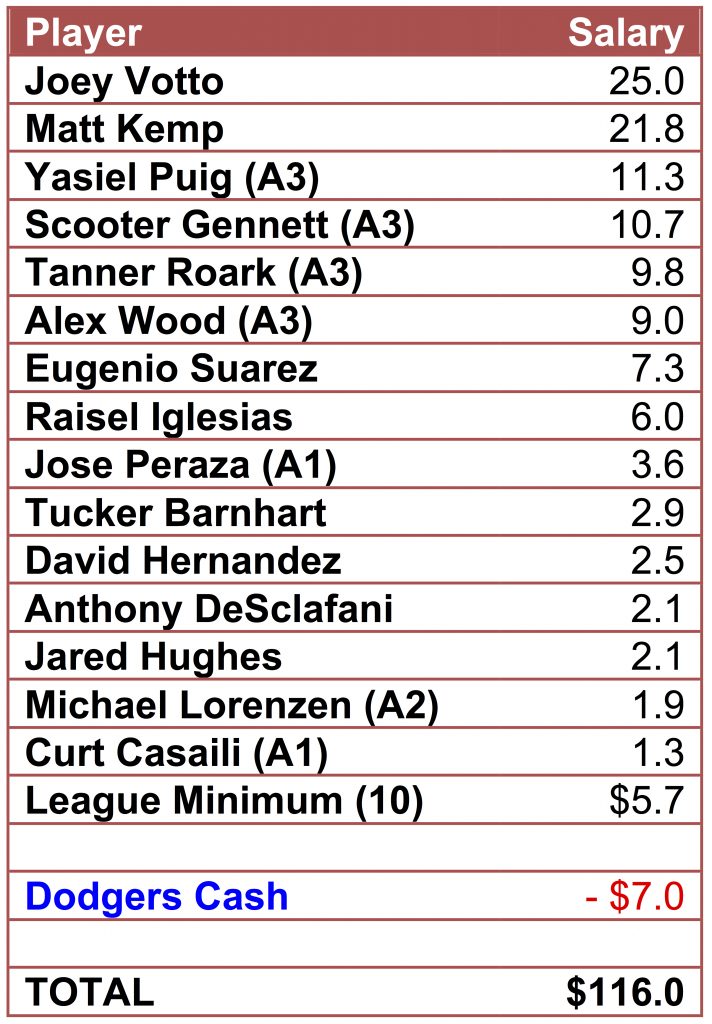 The two trades, net of the $7 million in Dodger Dough, have raised 2019 payroll to $116 million. Keep in mind that’s based on estimates of arbitration awards for seven players.

We’ve surmised the final payroll number might be somewhere in the range of $130 million to $150+ million. Assuming a number toward the lower end of those estimates, the Reds have spent half their new allowance. The front office has at least another $20 million to go.

Tanner Roark and Alex Wood will join a vastly upgraded starting rotation. Wood should slot in between Luis Castillo and Anthony DeSclafani. Roark is fourth in that group. Assuming no other moves are made to acquire a starter, the fifth rotation spot will be a competition among Cody Reed, Tyler Mahle, Robert Stephenson, Amir Garrett, Michael Lorenzen and possibly others.

Yasiel Puig should play everyday in the outfield, joining Scott Schebler, Jesse Winker and his Dodger teammate Matt Kemp. None are obvious candidates for centerfield.

In 2018, Matt Kemp had a brilliant first half (wRC+ 137) at the plate, followed by a steep drop (wRC+ 97) in the second. He’s a liability in the field. Kemp would make a decent trade candidate to a team that could mitigate defensive weakness with the Designated Hitter rule. Kemp for a serviceable reliever would be another win for the front office.

With the exception of “catcher with options” Kyle Farmer, none of the new players are signed beyond 2019. That means no help with the 2020 roster, but also no extended financial commitments. One-year players are prime trade fodder at the 2019 deadline.

But none of that is the big news. Money spent and roster improvements aren’t what’s most interesting or important about the past ten days. For Reds fans, the crucial takeaway isn’t dollars or players.

For years, whether offseason or trade deadline, the Reds have operated like they were afraid to make mistakes. Every roster move seemed like the product of a group decision of infinite importance. Paralysis was the predictable result. Remember the return for Matt Harvey, Zack Cozart or Billy Hamilton? Me neither.

When Dick Williams took over as General Manager, he said he wanted the Reds to be a “stable, boring organization” with the draft and development as their primary game plan. He used “small market” and “limited resources” to explain a lack of external solutions. He told us not to expect his Reds to be out “chasing trades and chasing free agents”. Williams didn’t want to be one of “those GMs that get all the coverage for trying to do the splashy deals” because “they’re trying to fill holes that they haven’t been able to address from within.”

And that describes how the Reds tried to operate for several years.

But that era is over.

The Reds over the past ten days have displayed an organization led by a confident front office team of Williams, Nick Krall and David Bell. The structure of the deals signals a welcome farewell to risk aversion. After all, when you populate your roster with one-year players, you pretty much know you’re going to be back at it again, a year later.

And there’s nothing wrong with that. Yes, you don’t want to load up your team with players that have to be replaced every year. But there’s no intrinsic reason to fear a fair measure of that, either.

Sure, the Reds new aggressiveness has been a product not of grand design, but of palpable frustration with the sluggish and jagged development of in-house pitching. (A good deal of that slow pacing was self-inflicted.) Nonetheless, change has arrived.

In the short term, unless Nick Senzel is destined for Billy Hamilton’s old job, the Reds could use a centerfielder. Senzel, though, might be whom the Reds have in mind.

On the other hand, in adding the bats of Puig and Kemp, the Reds created run-scoring space to trade Scooter Gennett and slide Senzel into a more familiar infield position.

The Reds have signaled they’re still looking for pitching. That might mean adding a reliever or two. Or maybe they’re casting for bigger fish. I’d send the names Scooter Gennett and Raisel Iglesias to Cleveland to see how close that gets to Corey Kluber. Bagging Kluber without giving up a top-four prospect would be the best move yet for the front office.

Here’s the thing, those deals out there, the ones still to come, they will be harder and costlier than what we’ve witnessed the past ten days. When the Reds acquire impact players with more than a year of team control, they will pay with better prospects, major league players, big money or some combination of those things. One-year players are relatively easy to pry away from their teams. Noah Syndergaard, not so much.

The operating principles and confidence of the Reds front office appear to be changing for the better. And that’s a good thing, because the most important, long-lasting moves are yet to come.