While the red and black confetti from the Winter Meetings is still settling, let’s take a look at where the Reds payroll stands.

These are the players with spending commitments established in guaranteed contracts as negotiated between the player and organization. The number represents salaries plus prorated signing bonuses, in millions of dollars, rounded to the nearest tenth. The data comes from Cot’s Baseball Contracts. 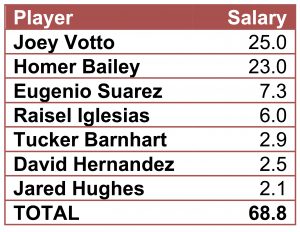 The seven players under contract total $68.8 million in commitments.

Based on the league’s Collective Bargaining Agreement, players who have accumulated three years of service time are entitled to an arbitration process to determine their salary. For an individual player, this runs through the accumulation of six years of service time, after which the player can become a free agent. (There is an exception to these rules for certain players who fall into the Super Two category. They get four years of arbitration instead of three. That doesn’t affect anything in this post.) These estimates for 2019 arbitration awards come from Matt Schwartz at MLB Trade Rumors (methodology). 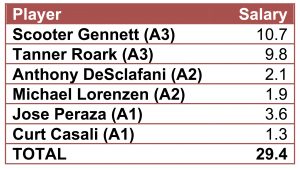 The Reds have six players who have arbitration rights for the 2019 season. The estimate for their combined salaries is $29.4 million.

Players who are short of three years service time have no control over their salary. The only constraint on the amount the team sets is the minimum established on page 11 of the Collective Bargaining Agreement governing 2017-2021. The minimum salary for a major league player in the 2019 season is $555,000, up from $545,000 in 2018.

A full active major league roster is 25 players. Assuming the 13 players who fall under one of the two categories above, that leaves 12 covered by the league minimum. This includes players such as Luis Castillo, Scott Schebler, Cody Reed, Jesse Winker and Amir Garrett. It would also include the newest Red, Connor Joe, if he makes the team. The Reds give small raises to players who fall under league minimum more than one year. Cot’s estimates the total for 12 Reds players at $6.9 million.

THE BOTTOM LINE FOR NOW

We know the Reds will make more moves and take on additional payroll. The question is how much? Some benchmarks: The 2018 payroll was $101 million and the Reds highest to-date was $115 million in 2015. Rob Huff at MLBTR estimated yesterday the Cardinals would spend $175 million in 2019.

How much the Reds will spend this year remains shrouded in whispers and speculation. Guesstimates range from $130 million to $150+ million.