Reaching deeply into my political science degree, I offered the following analysis concerning the funeral of George H.W. Bush this week: 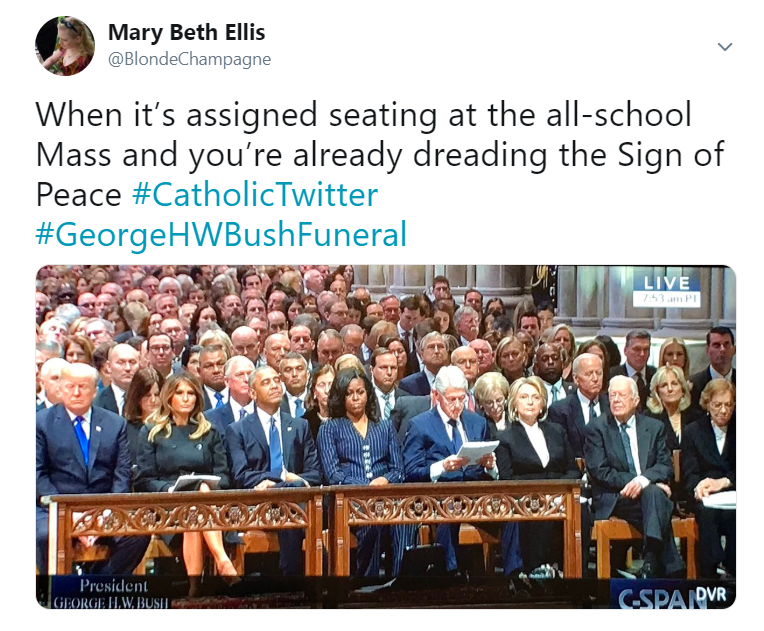 As you can see, I am squeezing every penny’s worth of value out of my parents’ tuition money.

Sharp-eyed The Readers will notice that the image of Awkward Pew is taken from a DVR recording. Massively with-it member of the young generation that I am, this was achieved via the highly technical process of aiming my camera phone at the television screen.

I have been taking all C-SPAN has had to give this week, for I am a complete pomp and circumstance whore. If there’s a procession, rifles, uncomfortable shoes, music nobody can sing properly, and big wide doors for people in uniforms to hold open, I will show up and I will be deeply moved. It could be the Opening Ceremonies of the Olympics. It could be Opening Ceremonies of a new Kroger’s in Avondale. I’m there with my camera.

(Consider this a plug for C-SPAN for all news, btw. It’s my go-to. It’s 95% non-partisan, and talk is kept to an absolute minimum so as to allow ambient noise to carry the story. As C-SPAN carries mostly government news, there’s a lot of standing around, but that’s where the DVR comes in, and, as a baseball fan, I feel right at home. Sometimes the feed consists of one camera shot and technicians yelling about wide angle lenses at one another. Sometimes producers even remember to identify the people we’re looking at. But otherwise, there aren’t any ginormous underbanners, crawls, half-screen popups, of eight faces in a single screen all yelling at once. You are left to your own thoughts and conclusions. Oh, you’ll hear stupid on C-SPAN, but that’s only when callers are invited to dial in from their rotary phones in the kitchen, at which point you can rest assured the action of any major story is over and there’s nothing left but the rantings of the landline-havers until the next Honor Guard appears on a tarmac, and you’re free for extended snack preparation.)

“I was thinking how stuffy it seemed,” someone commented regarding all the casket-carrying and slow-walking.

“Stuffy is the glue of the Republic, my friend,” I typed back, as I launched into yet another snack-pause, but the more I reflect on it, the truer it is. I consider George Washington our greatest President because he is perhaps the first leader in the history of man to willingly and quietly turn over the reins of power in a measured and peaceful manner– this when he could have easily been President for life, if he so wished, installing policy buddies to carry on his politics long after life left him. But the construction of the White House was beginning at the end of his second term, and he probably didn’t want the hassle of applying for an EZPass.

So when we see four former Presidents, plus the current occupant, all lined up together like this, even though you can practically see the hate rays waving out of their bodies towards one another, they sit there anyway. Even though it’s awkward. Even though, as I avidly kept expecting, the church roof was liable to cave in at any moment on the lot of them. Even though they were, in effect, watching their own future funerals.

The flags, the measured cadences, the military bands: These rituals are expected and “normal” at such a time, and because we expect them, and because we saw them the last time a President dies and will see them again when the next one does, they are soothing. They remind us that though the leader passes, even though long out of office, the Republic continues. 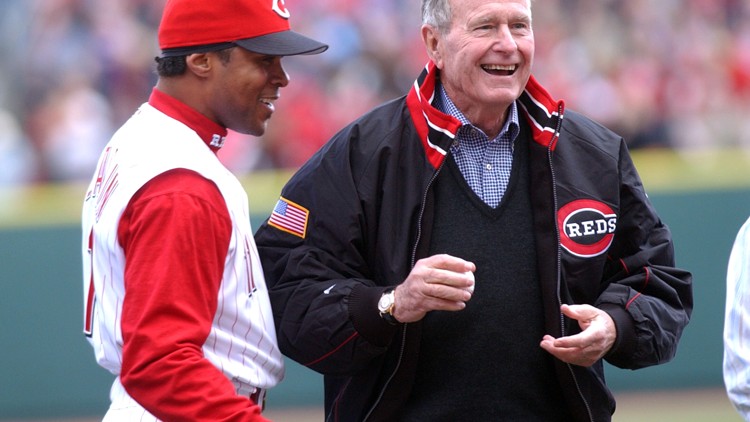 This is the comfort we find in sports, and in baseball in particular, which has been our companion in this fashion longer than any other: There’s a National Anthem, and then the first pitch, and then the players are introduced, and then they play, and then we feel despair and wonder where the playoffs went. But it’s a comfortable rhythm, one which resets each day with each game, and disrupting the pattern signals a not-quite-rightness that ripples across class, creed, and race.