The 66-94 Reds host the 81-78 Pirates in this seasonÃ¢â‚¬â„¢s penultimate game at Great American Ball Park today at 4:10 Eastern time.

The Cincinnati bullpen was literally just about average, which is saying a lot on this team. The bullpen earned run average of 4.15 was 16th in the 30-team majors, and the Reds split 52 games in which a reliever got the win or the loss.

These are the building blocks for next yearÃ¢â‚¬â„¢s bullpen. Or, they could be valuable trade chips. As has been pointed out by many in Redleg Nation, closers have much more value on contending teams than they do on last-place teams. This would be a way to leverage some assets that would mean more to other teams than they do to Cincinnati.

Lefthander Amir Garrett performed very well in key situations early in the year, but his performance dropped off drastically after he was hit in the leg by a comebacker in June. Interim Manager Jim Riggleman used righty Michael Lorenzen primarily in middle-inning, multi-inning relief. In 44 appearances, Lorenzen pitched 75.1 innings and recorded a 3.35 ERA prior to todayÃ¢â‚¬â„¢s start.

Garrett and Lorenzen are likely to have the upper hand on bullpen roles going into the spring, presuming they are still with the team. Lefty Wandy Peralta and righty Austin Brice have probably pitched themselves out of the teamÃ¢â‚¬â„¢s immediate future plans.

Now, regarding the starting pitching Ã¢â‚¬Â¦ 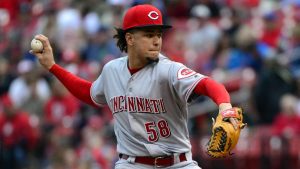 Luis Castillo finished the season with a 4.30 ERA in a team-leading 169.2 innings. His start to the season was very rough, but after the All-Star break, Castillo recorded a 2.44 ERA over 66.1 innings, striking out 69 and walking only 14. He has been wisely shut down for the year. There is absolutely no reason to risk injury at this point in a lost season.

Castillo has had approximately a season and a half to Ã¢â‚¬Å“figure things outÃ¢â‚¬Â at the big-league level, and his performance in the past two and a half months seems to indicate that he has. He would go into 2019 as the unquestionable number one starter if no changes to the starting pitching staff are made.

Unfortunately, none of his fellow products of the Reds farm system has come anywhere close to CastilloÃ¢â‚¬â„¢s level of advancement. During a meeting between Redleg Nation correspondents, Executive Vice President Dick Williams and Assistant General Manager Sam Grossman, the latter two acknowledged that the fact that young pitchers have not developed over the past couple of years is by far their biggest disappointment. In that August meeting, it was hinted that starting pitchersÃ¢â‚¬â„¢ respective performances over the final six weeks of the season was going to be important in determining how much they would be counted on in 2019.

Cody Reed got seven starts after late August, and by and large did decently. In three of those starts which could be considered excellent, he allowed only one earned run in a combined 15.2 innings. In the other three, which would be in the non-acceptable category, he allowed a combined 12 earned runs in 12.2 innings.

After the early part of the season which included some of the teamÃ¢â‚¬â„¢s most impressive starting pitching performances of the year (3.66 ERA in his first 18 starts), the wheels completely fell off for Tyler Mahle. In four starts following the All-Star Game, Mahle allowed 17 earned runs in 11.1 innings. At this point, he has to be viewed as someone who will have to earn his way back to the big leagues by performing well at Louisville in early 2019.

Sal Romano earned a spot in the rotation out of spring training, but struggled throughout the season. After a 4.45 ERA in 16 games started last year, Romano regressed to a 5.37 ERA in 24 starts in 2018. HeÃ¢â‚¬â„¢s been used out of the bullpen in recent weeks, and that may be where his future at the major league level lies.

As mentioned yesterday in this space, Anthony DeSclafani has been a major disappointment. Finally returning to the rotation after more than a year of injury rehab, DeSclafani has shown some flashes of his pre-injury form, but they have been very few and far between. A 4.93 ERA over 21 starts has done nothing to inspire confidence and hope in this veteran of four major league seasons.

Homer Bailey no longer has the stuff to consistently get batters out. ItÃ¢â‚¬â„¢s been a shame for both the team and him personally that injuries, surgeries and rehab over the past three years have left him as statistically the worst starting pitcher in the big leagues (1-14, 6.09 ERA, -1.5 WAR). As we mentioned yesterday regarding Billy Hamilton, you simply canÃ¢â‚¬â„¢t use a player with negative WAR in a high number of games and expect your team not to be negatively impacted. Dick Williams said earlier this week that he will have a discussion with Bailey about his future with the team sometime soon. The likely outcome of that meeting is that Bailey will be told if he wishes to remain with the team moving forward, heÃ¢â‚¬â„¢ll need to become a reliever.

Matt Harvey finishes the season as essentially the number two starter in the Reds rotation, with a 4.50 ERA over 128 innings. HeÃ¢â‚¬â„¢ll be a free agent, and I expect the Reds to approach him very quickly with an offer they think is fair based on his performance, age and injury history. If he says no, they will just as quickly move on to their next target Ã¢â‚¬â€œ which weÃ¢â‚¬â„¢ll talk a lot more about tomorrow in this space.

Robert Stephenson had a terrific year at Louisville: 11-6, 2.87 ERA, 135 strikeouts in 113 innings. Control remained a problem, with 57 walks. He got his chance to get some starts at the big league level, and appeared to have no idea what he was doing (12 walks, nine earned runs in 10.2 innings). You can only give a guy so many chances before you get tired of hearing about the potential and begin to realize it’s never going to materialize. Like all Reds fans, I hope the light goes on for Stephenson and he becomes a fantastic starter. I’m not holding my breath, though.

Taillon has been one of the Pirates’ rotation stalwarts, so with the way the Reds have not been swinging the bats, chances for another low-scoring game from the home team seem pretty likely. Lorenzen is starting his third game this month, and the MLB.com website is calling today’s start an audition for 2019. Most of this month has been that for the entire pitching staff. A solid performance for Lorenzen over four or five innings will certainly leave a favorable final impression for 2018.

No reliever threw more than 21 pitches in last night’s game, so everyone who is needed in today’s game should be available.