Way back at the beginning of this fateful season, when some of us were convinced the Reds could sneak into the playoffs, I decided to make some predictions. My crystal ball was full of optimism, hopeful that young players could step forward and that the front office would do something, anything that made sense. I have since been reminded to never, ever be optimistic when regarding the Reds.

Of my 23 predictions, I got two right…kinda. Like if you really, really squint. But hey, two for 23 is nearly 10 percent, which is higher than Jose Peraza’s walk rate so there are small victories. Let’s revisit and look forward shall we:

Predictions Made (with present commentary in parentheses):

It’s been a long slog from those initial predictions to now, with too many injuries and too little joy in the middle. But I’ve loved doing this Regularly Scheduled Rain Delay for a second season and having you all participate so intelligently every other week. Until 2019 then.

Sike, not done with me yet. We still have to settle the small matter of Author Views. Despite Matt making a valiant challenge right at the end, there was one clear winner in this fight: Me. I look forward to the grudge match in year three, with both Matt and I taking a title. Need to have something to compete for in 2019, right?

Oh, and on the small matter of my fantasy baseball team: The Kangaroo Court Fees ended up 1-20 on the season, finishing last in the league again. As I said, 2018 was a sad, sad year. 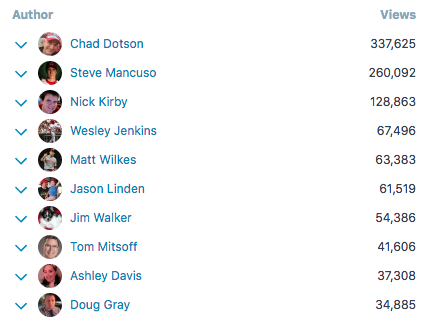