Over at RedsMinorLeagues.com on Tuesday I looked at the combination of the players on the farm between their contact ability and their ability to hit for power. You should probably give that a read if you already haven’t. It was that article, though, that led me down the rabbit hole to one of the players I would like to talk about later on in this article.

What I don’t want to do is look at every single player in the organization who makes, or struggles to make contact. Instead I wanted to focus a little bit on the players who are the best, or the worst at making contact in the organization. When only looking at players who racked up at least 150 plate appearances in 2018 for the Reds farm system here is a comparison of the top 5 and bottom 5 players when it came to strikeout/contact rates. 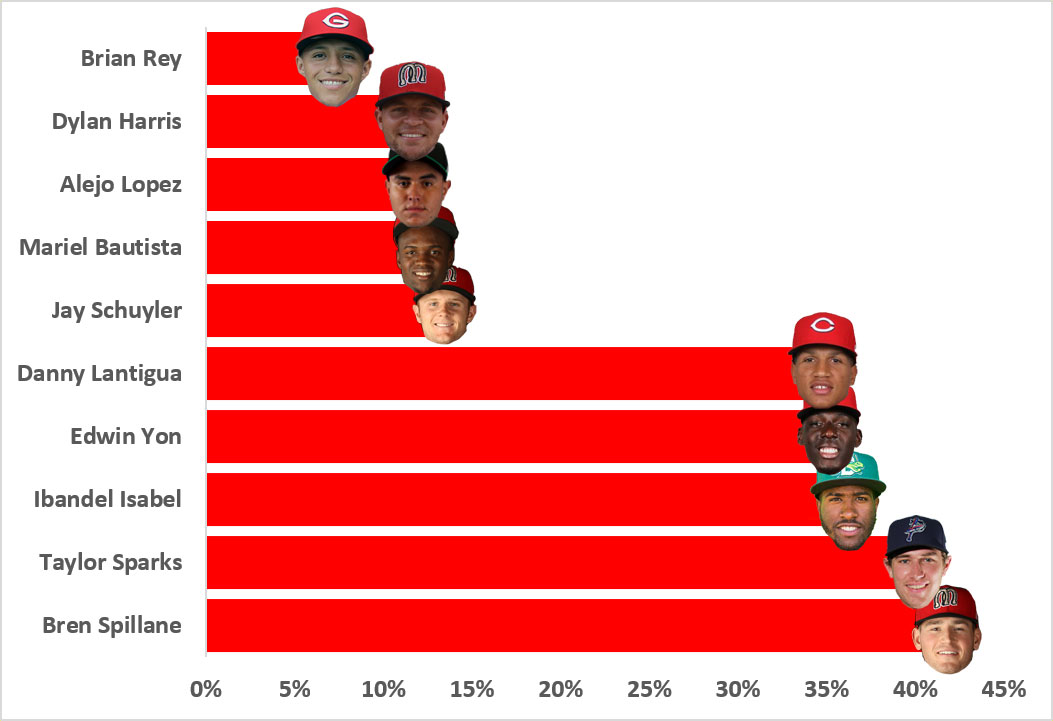 There’s obviously going to be a very large gap between the guys that rank at the top and at the bottom in a particular category. When looking at the bottom, both Taylor Sparks and Bren Spillane being over 40% and separated from the other three guys is particularly concerning. For Spillane, it was his first taste of professional baseball. But, his ability to make contact was a big concern coming out of the draft, too. He will need to really cut down on the strikeouts as he progresses.

But let’s look at the top of the chart. The guys that are ranked 2nd through 5th on the list are all pretty close. But Brian Rey is up there at the top of the list and is far and away on a different level of contact than the rest. He was the Cincinnati Reds 13th round selection in this past draft. In 193 plate appearances this season for the Greeneville Reds he struck out just 14 times. That’s a strikeout rate of 7.3%.

The Major Leagues is very different from the minor leagues. The pitchers are better. The hitters are better. The defenses are better. Everything and everybody is better. Still, the baseline comparison is that the guys are playing at a generally appropriate level for their current skillset. When looking at the Major Leagues in 2018 there is only one hitter who has struck out less than 9% of the time among qualified hitters: Andrelton Simmons. He’s struck out just 6.7% of the time he’s gone to the plate this season. Only Michael Brantley and Victor Martinez join Simmons in the sub-10% strikeout club this season.

That got me to thinking about how Brian Rey’s 7.3% strikeout rate stacked up historically in the Reds farm system. You have to go back to the 2013 season to find a player that topped that strikeout rate. Daniel Paula had a 6.7% strikeout rate for Billings that season. That’s 603 players and only one guy topped Rey’s strikeout rate. That’s pretty good.

The 20-year-old right handed hitter saw action at second base (just two games), center fielder (15 games), and right field (27 games). He can and does use the entire field at the plate. He only had two home runs on the season, but both of them were crushed. They went 404 and 417 feet. The power didn’t show up a lot during 2018, but clearly there’s at least a little bit in there. With his approach and his bat-to-ball skills, don’t be surprised if he’s the kind of guy who starts showing a bit more pop over the next few years.