The end of the 2018 season is rapidly approaching, and there are fewer answers in the Reds’ starting rotation than there were at the beginning of the year. It’s the most glaring weakness remaining for the team as it hopes to end its rebuild in the near future. The offense is one of the better units in the National League and will get even better with Jesse Winker and Nick Senzel for a full season. The bullpen is vastly improved. But the rotation is significantly further behind — enough so that the club is en route to its fourth straight 90-loss season.

The Reds are almost certainly going to be active in the free agent or trade market this offseason to find one, if not two, arms to round out their rotation and have a legitimate chance at competing in 2019. Acquiring two front-line starters, however, is going to take either a lot of money — perhaps more than the Reds are able (or willing) to spend — or trading away high-end prospects. That means if the team signs or trades for one top-tier pitcher, they may look to a dependable mid-rotation hurler to round out the rotation.

One potential solution is already on the roster: Matt Harvey.

Reds management has shown an affinity for Harvey, opting not to trade him despite the fact that he’s a free agent at the end of the year. President of baseball operations Dick Williams has also approached Harvey’s agent, Scott Boras, about a contract extension. Those talks never developed into anything serious, but they do open up the door to bringing Harvey back in 2019 and beyond.

Whether that’s a sound idea or not, though, will be hotly debated in the coming weeks and months. There are strong arguments on both sides, and we’ll take a look at them here.

Why the Reds should re-sign Harvey

Castillo has had more dominant outings, but Harvey has been Cincinnati’s most consistent starter this season — not many would’ve predicted that when he was brought over from the Mets. For a team with so many young pitchers, they’ll need a stabilizing presence with a proven track record to realistically compete in 2019. Harvey could potentially be that. He’s been a Cy Young contender and taken the mound in some of the grandest stages imaginable, starting an All-Star Game in 2013 and pitching in the World Series in 2015. The less-experienced pitchers can certainly learn from Harvey’s knowledge and experience.

Most importantly, though, Harvey is back to being a productive pitcher. While not as dominant or electric as he was in his early years, he has re-established himself as a major-league starting pitcher after two dismal seasons and a horrible start to 2018. His strikeout rate has risen from 15.6% in 2017 to 19.5% in 2018, with that number climbing to 20.5% in a Reds uniform.

More encouragingly, he’s rediscovered his ability to pound the strike zone. Harvey had a career-worst 10.9% walk rate in 2017, compounding his inability to strike hitters out. He’s done a 180-degree turnaround this year, dropping that number to 5.7% (5.3% with the Reds). During his stint in a Cincinnati uniform, he hasn’t walked more than three batters in any game, and that’s only happened twice in 22 appearances.

Harvey has even shown he can still put up eyebrow-raising numbers on the radar gun. Upon his trade to the Reds, his average fastball velocity jumped from around 93 mph to the mid-90s — not quite the triple digits he dazzled Queens fans with early in his career, but still plenty to get hitters out and make up for his diminished secondary offerings. 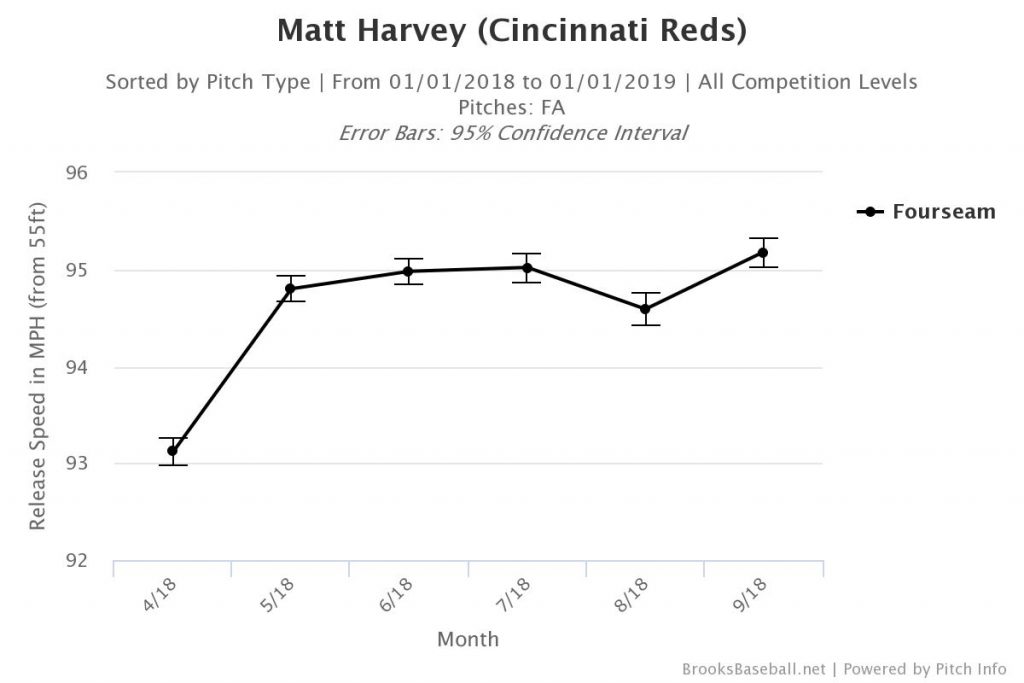 While not what they once were, his secondary offerings aren’t useless. As he gets further removed from his elbow and shoulder surgeries, Harvey’s slider has become sharper as well. The breaking ball, along with the changeup, was once his putaway pitch but had become ineffective after his shoulder surgery in 2016. Last season, his slider had a career-low whiff rate of 11.9%, according to Brooks Baseball. That, combined with a drop in his changeup’s ability to miss bats as well, led to a measly 7.5% swinging-strike rate overall — significantly below the league average of 10.4% and by far the worst percentage of his career.

When 2018 began, it was more of the same for Harvey’s slider. With the Mets, the pitch elicited a swing and miss a paltry 8.8% of the time it was used. The switch flipped once he was sent to the Reds, however. Since the trade, the slider’s whiff rate has jumped to 16.2%, which more closely resembles his glory days. He’s throwing the pitch harder (89 mph vs. 87 mph) than he did in April and is also getting more vertical movement on the pitch, keeping it lower in the zone with more consistency. (Note: The lower the number you see in the graph, the more drop the pitch is getting.) 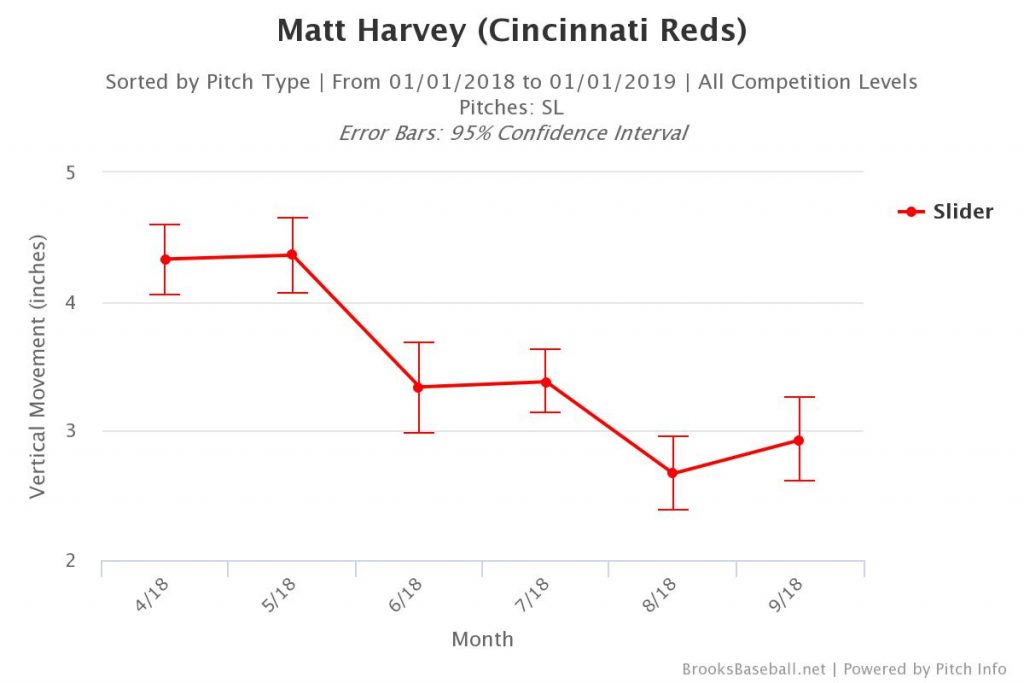 Even if Harvey is mostly going with a two-pitch combo, he’s shown he still has something left in the tank. He’s not an ace or anything close to it, but he could be a solid No. 4 starter for the next few seasons if he can maintain mid-90s velocity and a solid breaking ball.

From a monetary standpoint, Harvey shouldn’t command a huge salary either. Per FanGraphs win values, his 1.4 fWAR this season equates to $11.5 millionÃ‚Â in value. If he gets to around 1.6 or 1.7 WAR by the end of the season, he could be looking at a value of $12 million to $14 million based on current estimates. Those aren’t definitive figures — the market will ultimately dictate Harvey’s worth — but they at least provide a potential starting point when projecting what he might fetch in free agency.

If the front office is truly committed to expanding payroll as they’ve said several times on the record, it likely won’t be too egregious if Harvey agrees to a deal in the range of two years for around $25 million. That would free up the Reds to spend more on a potential front-line starter through free agency, should that be the route the organization chooses to go.

Why the Reds should not re-sign Harvey

In recent years, the idea that teams shouldn’t ever sign non-ace pitchers to long-term deals has become more prevalent in baseball circles. The reason is simple: They’re unreliable from a health standpoint (see: Bailey, Homer). Even the studs aren’t immune from injury, as Yu Darvish, David Price, and Johnny Cueto have demonstrated after signing mega deals in recent offseasons. The common denominator with those three pitchers, in particular: all were signed at the age of 30 or 31. You probably see where this is going.

Harvey will not have youth on his side. He’ll turn 30 just before the 2019 season begins. Most players begin to decline at this age, as the graph below shows. 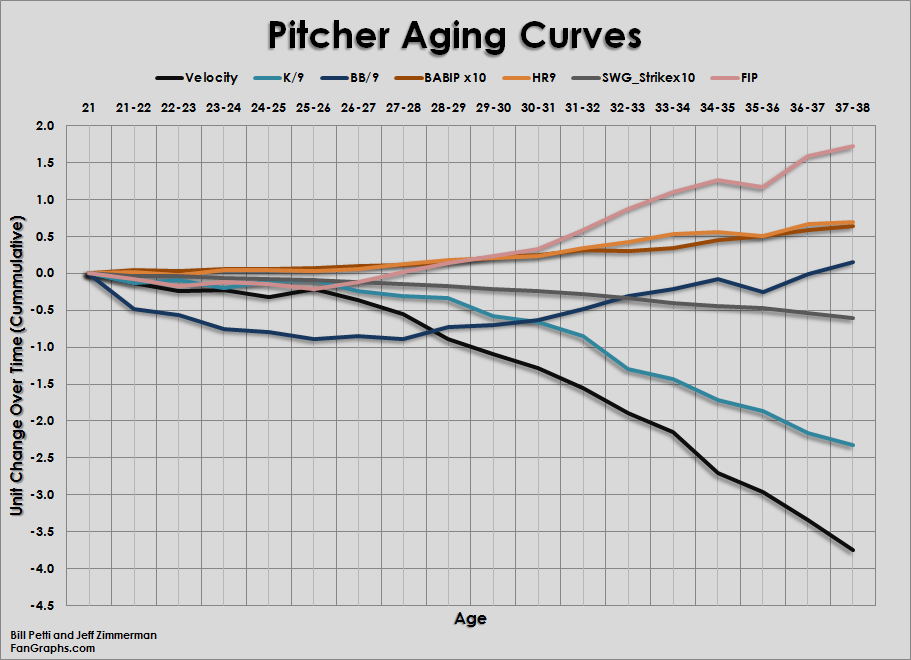 This data set is several years old now (created in 2012), but it’s still considered accurate in today’s game. The gist: Pitchers lose velocity, strike out fewer batters, miss fewer bats, walk more batters, and give up more home runs as they age. Obviously, there are exceptions to these trends, but most pitchers are not immune to Father Time.

Couple that with Harvey’s already extensive injury history — he had Tommy John surgery in 2014, underwent another surgery for thoracic outlet syndrome in 2016, and missed a chunk of time in 2017 with a stress fracture in his scapula — and it’s extremely risky to sign him to any more than a one- or two-year deal. Pitchers are already more injury-prone than any other players on the field. Should the Reds roll the dice on a pitcher who has already experienced so many medical problems? If he was the Harvey of old, sure, take that risk. Is he worth the investment given his current ability? The answer becomes less obvious.

Considering his agent is Boras, who is notorious for demanding top dollar for his clients, it seems unlikely Harvey will accept a deal for such a short length of time. Of course, the last offseason may have changed the game a bit, with many of his clients going unsigned for lengthy periods or failing to fetch their desired salaries. But there is little doubt that Boras will try to set the price tag high on Harvey.

The Reds are planning to increase payroll this winter, so the actual number may not matter a ton. Length is the main concern here. Would Harvey settle for a short deal or is he trying to cash in on what could be his last chance to ink a long-term contract? The answer to that question will loom large in this decision, as the Reds surely don’t want another sunk cost in their rotation in a few years.

Given Boras’ reputation, though, it wouldn’t be surprising to see him make this sort of argument for his client: “This is a former Cy Young candidate and game one starter in a World Series. He’s two years removed from his shoulder surgery. He only got stronger as 2018 moved on. He deserves more than a short-term, team-friendly deal.”

From a “stuff” perspective, Harvey essentially has only three pitches. He turns to his four-seamer on nearly 60% of his pitches, with his slider coming in at 23% and his changeup at 11%. His curveball is seldom used at just 5% this season. If his fastball velocity declines again, and it will as he ages, he’s going to become very hittable. Harvey also only has one reliable out pitch in his slider. The changeup — once an effective off-speed pitch that was running swinging-strike rates between 15% and 19% — is now the weakest aspect of his repertoire, sporting the third-worst value among all pitchers with 100 or more innings this season. Take a look at the pitch’s declining whiff percentage through the years: 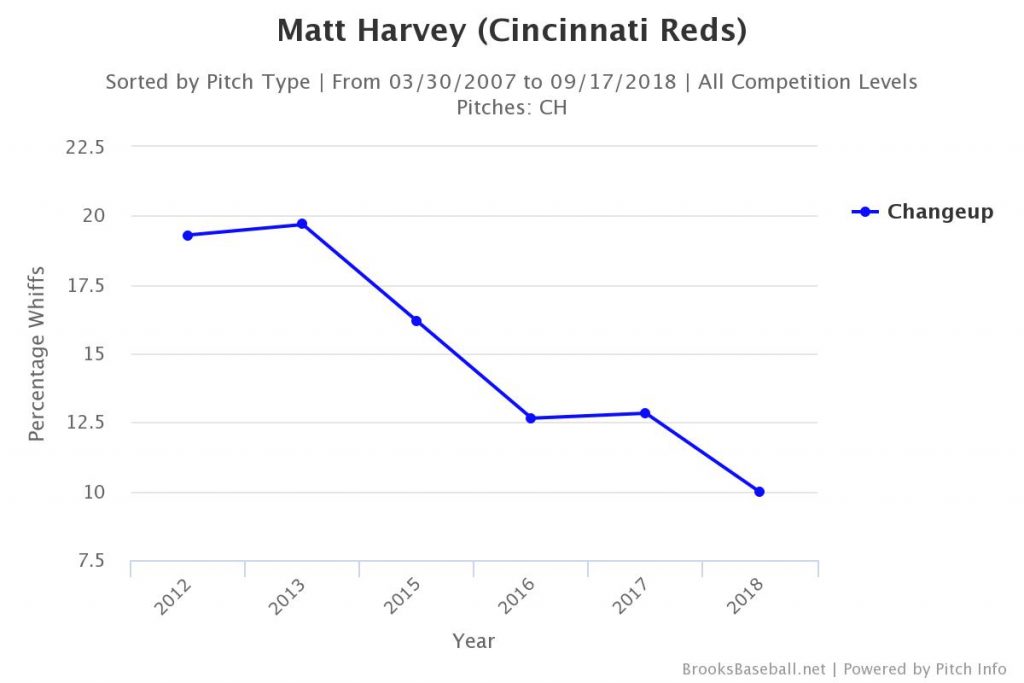 Harvey’s stuff has been undeniably better since May, but trying to project that into his 30s is difficult, especially when he’s already down to two dependable pitches. Even if his control continues to be strong, he doesn’t strike out many hitters or miss many bats (9.5 SwStr% vs. league average of 10.4%). Paired with a hard contact rate that has climbed in each of the last two seasons — apexing at a career-worst 38.8% in 2018 — and a below-average ground ball rate (42.1%), that may not be a formula for success in the long run.

There are strong arguments for and against re-signing Harvey this offseason. The Reds need starting pitching; Harvey isn’t the perfect answer. One thing the Reds can’t afford to do, though, is only consider him because of their familiarity and apparent affinity for Harvey. Given who owns the team and the contracts he’s offered or trades he’s nixed based on sentiment, it’s hard to tell whether that will happen. The organization has a tendency to be risk-averse unless it comes to keeping players they’re already familiar with. That’s been both a blessing and a curse at times. There’s no clear answer here, but the front office needs to carefully weigh whether it’s worth taking on the risk of a 30-year-old with an extensive history of right arm injuries for multiple years.