No matter when I was in sight of the field, the groundskeepers were there too. I never had to wonder if anyone was babysitting the basepaths or fretting over the length of each individual blade. There was.

I cautioned tour groups within an inch of their lives to avoid the grass, not necessarily because I’d been informed to pass this information along, but because I’d seen the crew on hands and knees along the warning track, endlessly grooming, with infant-sized manicure scissors from the looks of it, and woe to the tourist whose Crocs would stomp upon it. I’d tackle intruders myself if it didn’t mean further bent blades. If you think you don’t like rain delays, imagine the agony of these guys looking at a 3 AM clock-out with a day-night doubleheader the next day. It’s hard work, and dangerous, when the wind and the lightning crash the party.

One of my favorite Twitter accounts is the one belonging to Stephen Lord, their fearless leader. If working at the HOF offered a bare glimpse of how hard the crew was working on a daily basis, this account expands upon the endless concerns and meteorological mood swings of a man whose life is a dependent on the weather as any farmer’s. You’ll learn about post-aerification spread, venting John Deeres, and sod bluegrass blends. My favorite is a preview of turf which will host Reds games in about a year. 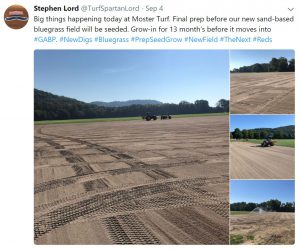 We weren’t afforded this kind of fun during my growing-up days at Riverfront stadium; the plastic carpet was there, and maybe required stomping every now and then or a new paint job between Bengals games. Fretting over a tiny bald patch in the outfield was unheard of. Astroturf might have granted the world a Big Red Machine defense, but it was a great loss in the culture of baseball.

“Greenest grass I ever saw,” one of my commenters once said reverently of Crosley’s outfield. I do not have any contemporaries who wax nostalgic over the way the plastic Riverfront carpet glinted in the afternoon sun.

The major leagues are meant to be the greatest of all: The best players, in the plushest locker rooms, eating the densest nutritional food in the most sincere dugouts. And when it’s time to play, they’re on the greenest, prettiest, most lovingly mowed grass there ever was. There is no room for weeds in the cathedrals of the national pastime.