Ã¢â‚¬Å“DonÃ¢â‚¬â„¢t sign pitchers to long term contractsÃ¢â‚¬Â has become a rallying cry for many armchair GMs in the comment sections throughout the internet of baseball. Interestingly, real life GMs might be trending in that direction. Starting pitcher extensions have become more and more rare over the past few seasons, with only six such extensions having been agreed to in 2017 and 2018 combined. Compare that to 18 starting pitcher extensions in 2012, and you can see that this is a relatively new trend.

Most of us can get to the bottom of this without thinking too hard. GMs are learning that pitchers, no matter what their name is or what their previous production might have been Ã¢â‚¬â€œÃ‚Â are fighting an uphill battle when trying to stay healthy. The act of throwing a baseball is an unnatural body movement that puts immense strain on the entirety of the arm, from the shoulder down through the elbow and even the wrist and hand. A starting pitcher does this thousands of times a season between pitching in actual games and side sessions. ItÃ¢â‚¬â„¢s not great for their health, but itÃ¢â‚¬â„¢s how the game is played.

So, if youÃ¢â‚¬â„¢re a starting pitcher and want to get an extension, you should be either A) Really, really good, and/or B) Ã¢â‚¬Å“durableÃ¢â‚¬Â. I put durable in quotes because, as I mentioned above, past durability isnÃ¢â‚¬â„¢t necessarily a telltale sign of future durability.

Failing owning one or preferably both of the above traits, a team might offer an extension to a starting pitcher if theyÃ¢â‚¬â„¢re very, very desperate for starting pitching. Any readers still checking in on the Reds on a daily basis know that this is exactly where the team falls. ItÃ¢â‚¬â„¢s totally unclear who will be starting games for the reds next week, nevermind next season. The cavalcade of failed pitching prospects is almost at its end, and the Reds have little, if anything, to show for it.

So when Anthony DeSclafani came back from injury this season and started to pitch well, it was natural for fans to want to start thinking about an extension. DeSclafani, of course, has met the first criterion above; Once upon a time, he looked to be a very solid #2 starter for the Reds. But we all know the story Ã¢â‚¬â€œÃ‚Â injuries have almost completely derailed his promising career. Having only pitched 123.1 innings in 2016, and missing all of 2017, many Reds fans were quick to write him off as another failed experiment. Indeed, when it was announce Disco might miss half of the 2018 season as well, even the most optimistic Reds fans started to wonder if weÃ¢â‚¬â„¢d ever see him in a Reds uniform again.

Flash forward to June 6th, 2018. DeSclafani took the mound for the first time since 2016, and looked pretty darn good, despite giving up 4 runs. He would only give up two runs in each of his next three appearances against division rivals St. Louis, Pittsburgh and Chicago. He would skate along relatively smoothly, until the Ã¢â‚¬Å“Disco is BackÃ¢â‚¬Â party hit itÃ¢â‚¬â„¢s apex on August 10th, when he shut out the Diamondbacks through 7 innings striking out 9 and walking none.

These are the kinds of performances that some of us, myself included, thought Reds fans might never see from this young man again. The numbers through his 94.2 IP in 2018 wonÃ¢â‚¬â„¢t blow the doors off of anyoneÃ¢â‚¬â„¢s barn, but his 98 xFIP- is almost dead on league average. When you take a look at the uncertainty that litters the rest of the Reds rotation for the foreseeable future, it becomes pretty apparent that the Reds need to try to lock up Anthony DeSclafani.

Again, there isnÃ¢â‚¬â„¢t a ton of recent precedent for starting pitcher extensions. ThereÃ¢â‚¬â„¢s even less precedent for extending a starter who hasnÃ¢â‚¬â„¢t pitched 100 innings since missing the equivalent of two full seasons of baseball. For that reason, weÃ¢â‚¬â„¢ll need to get a little creative with the contract comps. LetÃ¢â‚¬â„¢s take a look at two pitchers who recently signed extensions that are in the mold of what Disco fans might expect.

Like DeSclafani, Chase Anderson has been pretty dang close to exactly league average as a starting pitcher throughout his career, according to xFIP and xFIP-. Unlike DeSclafani, Anderson has been pretty healthy throughout his career, having only landed on the DL a handful of times, and never for a serious arm injury. Anderson cashed in on a breakout 2017, during which his Ã¢â‚¬Å“money numbersÃ¢â‚¬Â were a lot better than his peripherals, pitching to the tune of a 2.74 ERA over 141 innings for the Brewers. His FIP and FIP- (both very good)backed up that ERA, but xFIP and xFIP- (both very average) tells us that the results were a fair bit better than his actual pitching.

This deal is pretty similar to something I could see Disco signing for. The club options give the Reds a little insurance in case he gets injured again, and along with the incentives would give Anthony a nice bump in pay should he perform up to the standards he holds for himself. However, since a healthy league average pitcher is more valuable than an oft-injured league average pitcher, I doubt DeSclafani could get this kind of monetary value in a deal, unless he proves himself a little more in 2018.

The Royals signed Danny Duffy to a five year, $65M extension of January 2017, fresh off an 89 xFIP- season. The deal curiously doesnÃ¢â‚¬â„¢t contain any option years, meaning the value of the contract is what it is. HeÃ¢â‚¬â„¢s signed through 2021.

Duffy, unlike Disco and Chase Anderson, has had some pretty erratic seasons as far as performance goes. HeÃ¢â‚¬â„¢s ranged anywhere from a 117 xFIP- (17% worse than an average pitcher) in 2014 to an 89 xFIP- (11% better than an average pitcher) in 2016. The 2018 version of Duffy has been somewhat disappointing, pitching to the tune of a 116 xFIP-. The Ã¢â‚¬Å“money numbersÃ¢â‚¬Â have almost always been pretty good for Duffy though, as he owns a career 3.92 ERA.

Again, these numbers are a little out there for a DeSclafani deal. More than anything, this deal should serve as an example of what the Reds SHOULDNÃ¢â‚¬â„¢T do. The Royals made things a little more difficult on themselves by A) signing Duffy right after an outlier season, and B) not offering themselves any flexibility in the contract in the form of an option year or two.

To avoid a contract like DuffyÃ¢â‚¬â„¢s I believe itÃ¢â‚¬â„¢s imperative that the Reds sign Disco this offseason, and they should be sure to include plenty of incentives and option years to be sure theyÃ¢â‚¬â„¢re protected against another lost season or two.

So, what should an Anthony DeSclafani contract look like? LetÃ¢â‚¬â„¢s take a look. 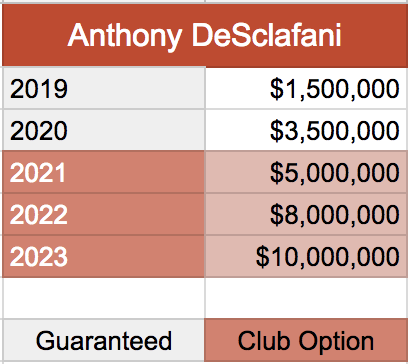 Here we see a modest raise over what Disco can expect to see in arbitration over the next few seasons, but not anything too expensive. The real value in the contract comes if Disco can string together two healthy seasons Ã¢â‚¬â€œÃ‚Â a nice pay raise to $5M, then $8M, then $10M should he continue to stay healthy and pitch at a high level. If he gets hurt again, or itÃ¢â‚¬â„¢s determined that his injuries have negatively affected his trajectory, thereÃ¢â‚¬â„¢s very little lost on the teamÃ¢â‚¬â„¢s end.

What do you think? Should the Reds extend Disco? If not, why? If so Ã¢â‚¬â€œÃ‚Â how would you organize the contract? Sound off in the comments!