As the season slowly and mercilessly winds down to an end, we can start to take a closer look at the one positive aspect of this Reds team: the offense. Other than a few lulls induced in part by injuries to key players, the bats showed up this year and continued to show steady improvement over the last few years.

I want to address what will become a very obvious trend throughout this post. Joey Votto had an incredible season last year and was nearly National League MVP. Jose Peraza was very, very bad. The single most predictable outcome was that Votto would decline and Peraza would improve in 2018, and that is exactly what happened. These numbers are not meant to tell the entire story, rather show how each playerÃ‚Â progressed, or regressed, in specific facets of their game relative to both their teammates and to the league.

We can start with plate discipline. Swinging at strikes and not swinging at balls has been a skill that most people have gotten used to and accepted as a good indicator of strong plate discipline. Interestingly enough, only one Reds player dropped their O-Swing% more than league average this year, and that just happens to be Jose Peraza. 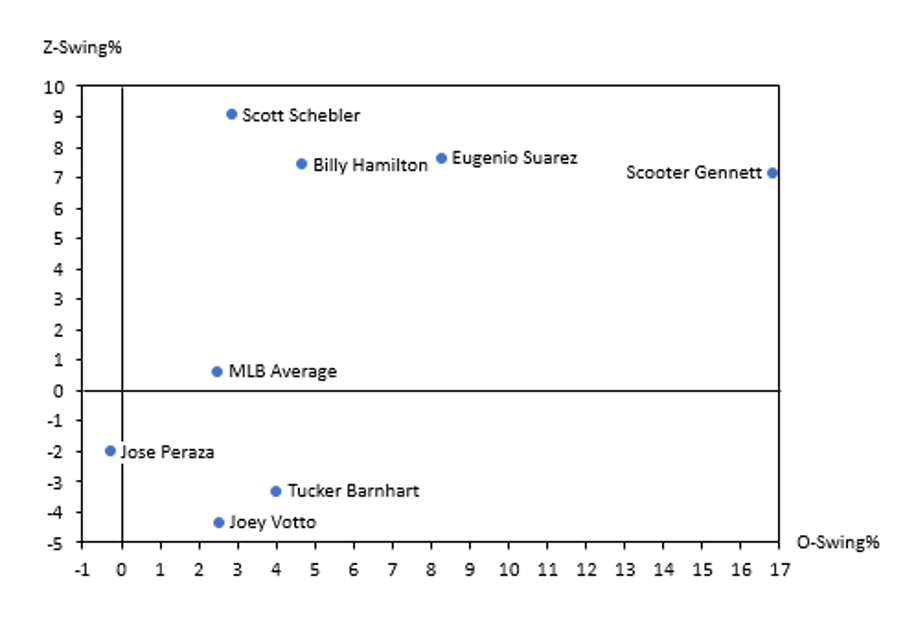 Peraza has also cut down on swings inside the zone, indicating he was clearly trying to be more selective and improve upon his anemic walk rate from last season. What really stands out here is how much more aggressive some of the Reds were this season, including Scooter Gennett, who is having another terrific year despite swinging at a lot more balls. Scott Schebler did well by increasing his Z-Swing% three-fold compared to his O-Swing%. Joey Votto took a slight step backward by offering at more balls and fewer strikes.

How did these changes translate into quantifiable performance on the field, in terms of walks and strikeouts? Once again, Jose Peraza takes the cake with the strongest improvements. 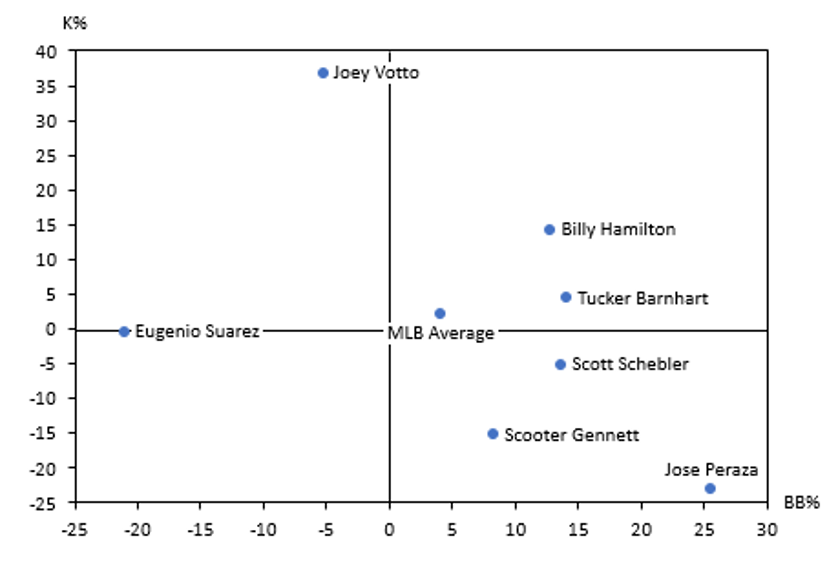 Peraza improved his aforementioned terrible walk rate from 2017, though it remains well below league average. He was also able to reduce an already strong strikeout rate, giving him the 5th best rate in baseball.

Despite swinging more, Gennett and Schebler also make positive progress in both metrics. Billy Hamilton walked more but also struck out more while Joey Votto took a step both in both areas, but what do you know, he still has the 2nd best walk rate in the majors (best if you do not include Trout, because how is anyone supposed to beat him in anything?). The strikeout jump is definitely more of a concern for Votto, but again, he is still well below average.

Moving on to strength of contact, the next graph represents good news for almost the whole team.Ã‚Â 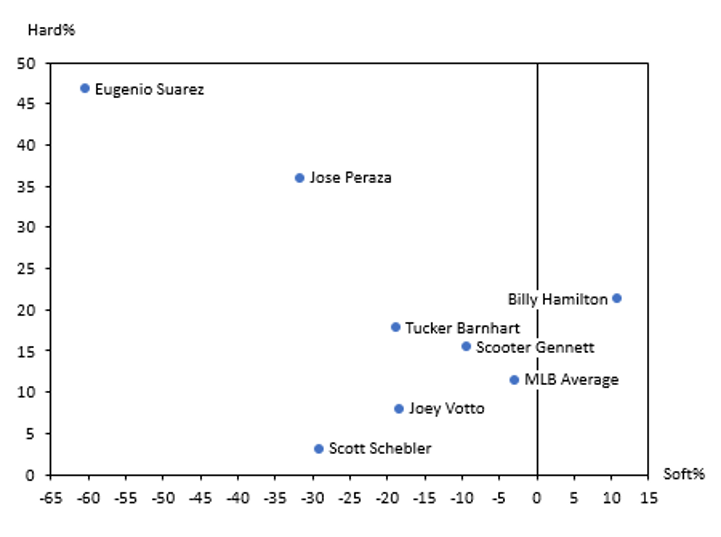 Everyone has increased their hard contact rate with only Votto and Schebler trailing the league average. In terms of soft contact, everyone has decreased their rates and outpaced the league except for Billy Hamilton, who saw a slight uptick.

Suarez and Peraza really stand out as players who made the biggest strides. Suarez in particular possesses an elite batted ball profile, ranking 2nd in MLB in hard hit % (49.6%) and 1st in MLB in soft hit % (8.1%). This is a huge part of his offensive breakout that should land him some NL MVP votes.

Continuing on with the batted ball profile we see some similar names as the outliers. 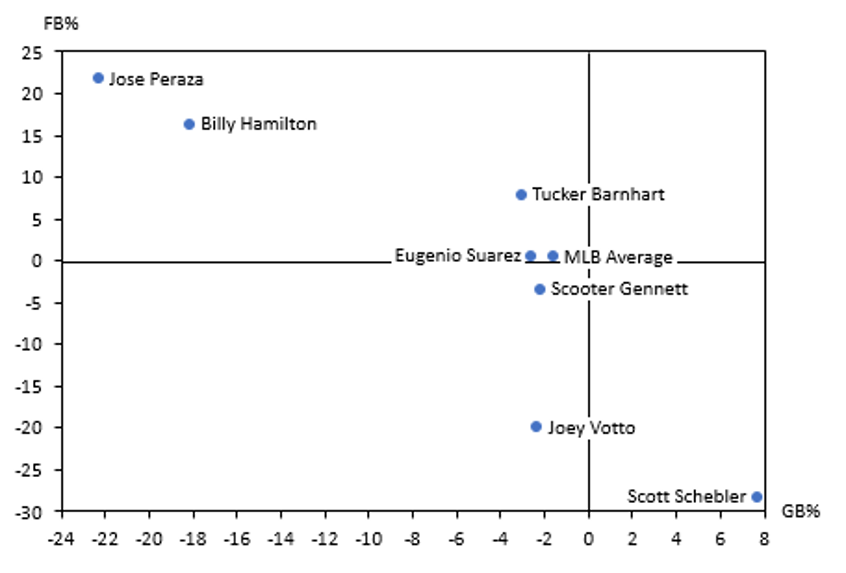 While Peraza and Hamilton have increased fly balls and decreased ground balls, that is not necessarily a good thing considering their strong speed and lack of power. Peraza has actually used this to his advantage this year and increased his ISO from 0.66 to .119, while Hamilton’s ISO and overall production have essentially remained the same.

On the other side of the picture is Votto and Schebler, two guys who do have power and benefit from getting the ball in the air. The silver lining with their FB% declines is they both have increased their line drive percentage and helped buoy overall production a bit, even if their ISO has suffered. Votto is actually the league leader in line drive rate at 31.5%.

Votto referenced this in a great article by C. Trent Rosecrans ($) on the Athletic yesterday, as Joey stated he feels he has almost made too many adjustments to account for age when he might not have needed to do so yet. He seemed to understand the mechanical change he had made that resulted in too much topspin, not allowing him to hit for as much power, even though he is hitting the ball as hard as he ever has. Needless to say, I think this is the good news Reds fans have been looking for in terms of wondering where Joey’s MVP-type numbers went this year.

Put it all together and the overall improvements are definitely positive for the Reds as four players have showed strong progress and Votto the only regular who took a serious step back. 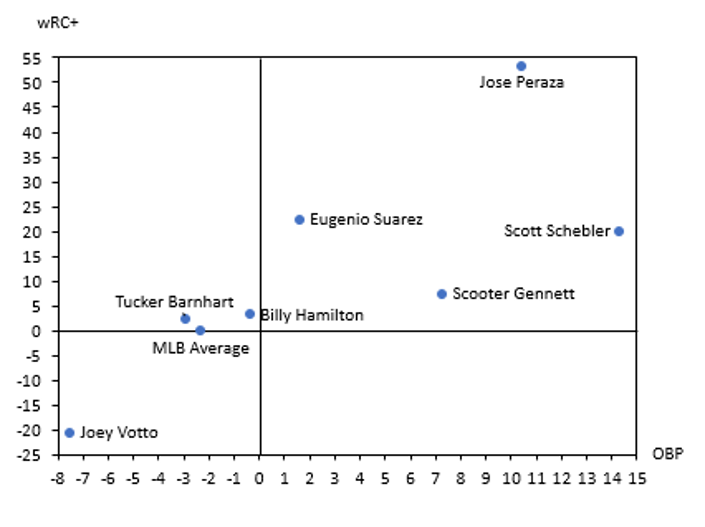 As I mentioned above, Peraza’s 2017 campaign was about as bad as you can get, so naturally the only way to go was up. However, he went out and showed that he can hold his own offensively, which for the time being reinforces the major needs of the ballclub as starting pitching and centerfield. Once those are filled, fans can start clamoring for an upgrade at SS.

Barnhart and Hamilton have produced very similarly to last year, while Scooter so far has been able to best his amazing 2017 season and has a legitimate shot at the NL Batting Title.

Other positive developments include Suarez’s breakout year and Scott Schebler, who although he could not stay healthy again, showed he too belongs as part of a strong offensive unit. This team was really rolling with Schebler and Winker healthy, and hopefully those two are able to come back next year and pick up where they left off.

Stayed tuned for the final edition of the inaugural At-Bat with Matt and we will look at the team’s totals and how they stack up to previous seasons of the Rebuilding Machine.