The Short Version: After a two and a half hour rain delay, the Redlegs — led by Phillip Ervin — brought out the bats and beat the Padres to even the series.

The Good
–Outstanding game for Phillip Ervin, who went 3 for 3 with two home runs, a walk, four runs scored, and four runs batted in. One of those RBIs came on a squeeze bunt. Oh yeah, and for good measure, Ervin also had a nice catch in the outfield.

–Jose Peraza had two hits, including a double. He also drove in three. Scott Schebler only had one hit (plus a walk), but it was a big one: a grand slam home run.

–Michael Lorenzen allowed one hit over three scoreless innings of relief. He also singled and scored a run.

Not-So-Random Thoughts
–Long night — a two hour, 37 minute rain delay before first pitch — but it was worth it. Even now, it’s still fun to watch the Redlegs break out the bats.

–The Reds struck out fifteen times tonight, in just eight turns at bat. And they won big. Very nice.

–The Reds set a franchise record for grand slams in a season, with 10. Baseball is such a funny game. This team is lousy, but Cincinnati has had so many great teams over the years. Yet 2018 is the year they hit more grand slams than ever before? I love it.

–Jose Peraza is fourth in the National League in hits. Think about that one for a moment.

–The Reds had Friday Night Fireworks before the game tonight, because of the rain. I feel like it is important to note this for the historical record.

–For some reason, I enjoyed the fact that Votto had to move his three ring binder to make room for his helmet. 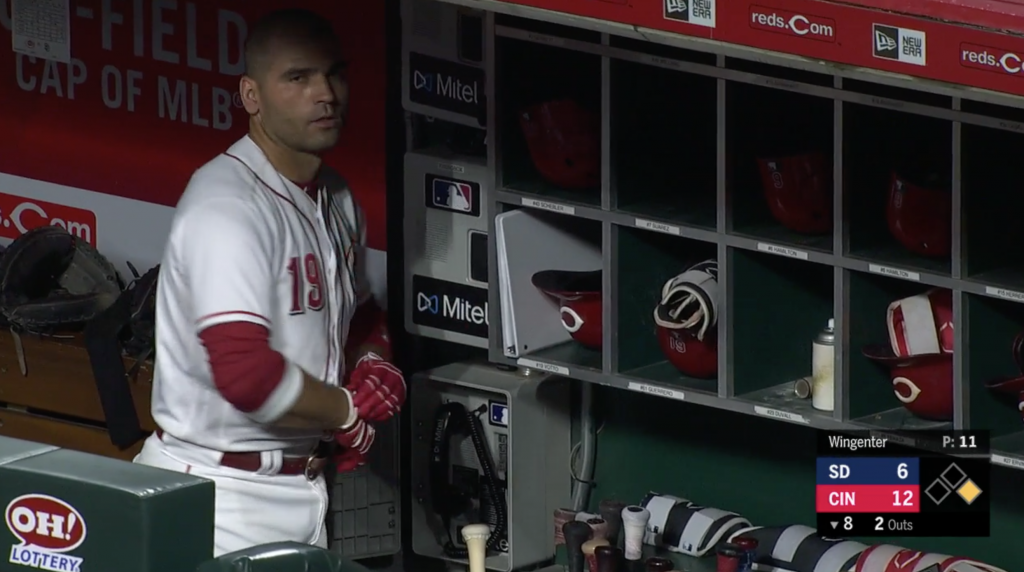 –Disco gave up two runs in the first, and it was looking like another typical night for the home team. But in the bottom of the second, the Reds struck back. Suarez led off the inning with a walk. After Williams grounded into a fielder’s choice, Barnhart and Ervin walked to load the bases, and Williams scored on a passed ball to make the score 2-1, San Diego.

After Schebler walked to load the bases again, the Padres went to their bullpen, but Peraza promptly doubled in all three runs. Reds 4, Padres 2, after two complete.

–San Diego tied the game with runs in the next two innings, but the Reds inched ahead once again in the bottom half of the fourth when Phillip Ervin homered to left.

Two innings later, the good guys broke it open with a really strange sequence of events. With one out, Williams singled and advanced to third when Barnhart singled. Ervin then singled on a gorgeous suicide squeeze bunt, scoring Williams and giving the Reds a 6-4 lead. Lorenzen then laid down a bunt that was likely intended as one of Interim Reds Manager Jim Riggleman’s beloved sacrifices, but it got past the pitcher and Lorenzen reached to load the bases.

That’s when Schebler homered to right, a grand slam that gave the Reds a 10-4 lead and put this one out of reach. Ervin added a two-run homer in the seventh — his second of the game and sixth of the year — and that was all she wrote.

–Matt Harvey will go to the mound tomorrow in game three of the series. Plenty of good tickets still available.

There is no further doubt in my mind that the front office listens to the @redlegradio. Listen to Chad and Bill talk about Bailey in the latest podcast and tell me there is no parallel. #Reds #RedsCountry https://t.co/OdT9ZmIteY