This was the year Luis Castillo was going to establish himself as the ace of the Cincinnati Reds. He was their beacon of hope for the future of the pitching staff. The player who was supposed to fill the enormous shoes left behind by Johnny Cueto three years ago.

It was easy to get excited about La Piedra’s electric right arm after watching the Tim Adlemans and Asher Wojciechowskis of the world take the mound for much of last year. Castillo represented hope for the future — a light at the end of the seemingly endless rebuild tunnel. That also made it easy to forget he was 25 years old and had only 15 big-league starts under his belt coming into 2018.

We were quickly reminded how nonlinear and unpredictable pitcher development is.

Despite his still-electric repertoire, Castillo has had an overall disappointing season. Through 27 starts and 143 1/3 innings, he owns a 4.83 ERA — quite the far cry from his 3.12 mark during his rookie campaign. His potential is still ace level, as his career-best 11-strikeout performance on Saturday night demonstrated, but a few components have been missing in his sophomore season. The first, and most obvious, is his fastball command. When paired with a small drop in velocity, it’s led to a significant increase in hard contact allowed.

The second issue is a byproduct of that poor fastball command: struggles against left-handed hitters.

Let’s take a look at his splits from last year versus this year. 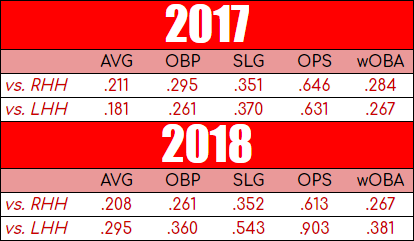 That’s a stark difference. In Castillo’s rookie year, he wasÃ‚Â better against lefties. While he’s remained dominant against right-handers, he’s regressed mightily when facing hitters in the opposite batter’s box. The explanation — or at least the start of it — can be traced back to the aforementioned fastball command.

Castillo is keeping the ball in the strike zone better this year, bringing his walk rate to 7.1 percent from 8.9 percent in 2017. Within the strike zone, though, he’s having trouble painting the corners. The result? Lefty hitters are slugging .620 against his heater, a number supported by an expected slugging percentage of .629. Take a look at the heat maps (2017 on the left, 2018 on the right), and it becomes clear why lefties are bashing his fastball.

Castillo is still doing a decent job of coming inside against lefties, but he’s missing off the plate far more often than he did in his rookie year. He has also started throwing the fastball higher in the strike zone and isn’t focusing on the outside part of the plate as much. As the graphic below shows, up and in, middle-in, and middle-away have been his best spots for limiting hard contact to lefties. Without hitting those spots as consistently, he’s allowed a lot more hard contact in the middle of the zone. 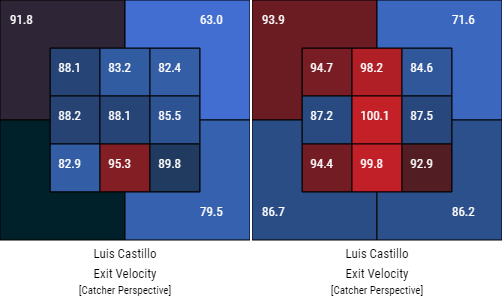 One potential explanation is his fastball is getting nearly an inch more of vertical and horizontal movement this year, according to Brooks Baseball data. The horizontal part of that equation is where we’re going to focus. His heater is mostly straight, but it tends to tail toward right-handers and away from left-handers. Righties have a harder time with the pitch because it moves in on their hands and they often can’t get the barrel on it. Against lefties, however, Castillo’s fastballÃ‚Â is often moving right into the hitting zone when he doesn’t place it properly.

He’s also throwing up in the zone more often. This is where we also shouldn’t discount the effect of his average fastball velocity dropping from 97.2 to 95.7 mph. Instead of blowing the ball past hitters up in the zone, where he seems to be focusing his efforts — whether intentionally or not — against lefties, losing that extra tick has helped them catch up to it.

However, he’s still one of the hardest-throwing starters in the league, ranking ninth among all qualified starters in average velocity. Sure, hitters are seeing more hard throwers than ever before, and they’re certainly able to catch up to even the fastest pitches. But at the end of the day, the league is slugging .378 on fastballs at 95 mph and above and .489 against heaters of 94 mph or less. All of that is to say there are other factors at play with Castillo’s hardships against left-handed batters.

Now, we bring our attention to his other fastball: the sinker/two-seamer. Castillo picked up the pitch in the middle of last year, and it almost immediately became another nasty selection in his arsenal. When hitters put it in play, it was a groundball three-fourths of the time, and it gave them yet another 97 to 100 mph offering to contend with. Plus, it had completely different movement than his other fastball. Naturally, Castillo started playing with his new toy more and more as the season went on. By September, he was using the sinker on approximately one quarter of his pitches.

The trend continued into 2018. In April, he increased the sinker’s usage rate to 30% overall — higher than his four-seamer — and 26% against left-handers. It didn’t go well. The pitch was bashed for a .750 slugging percentage. The small sample size wasn’t much to get worked up about at the time. But even as he’s reduced his sinker use to around 20%, the results haven’t improved as the year wears on. For the year, it’s been hit for a .522 slugging percentage overall, just trailing his four-seamer for the worst pitch. Against lefties, though, the sinker has been far worse, getting hit for an astoundingly bad .712 slugging percentage.

The obvious reason for the sinker’s regression is he’s also having trouble commanding it. Castillo’s strike zone rate with the pitch is just 52.4% this year compared to 56.4% in 2017. The heat maps show a similar story to that of his fastball. He simply hasn’t kept the pitch down in the zone — a key component of a good sinker — making too many mistakes over the middle of the plate (once again, 2017 on the left and 2018 on the right). 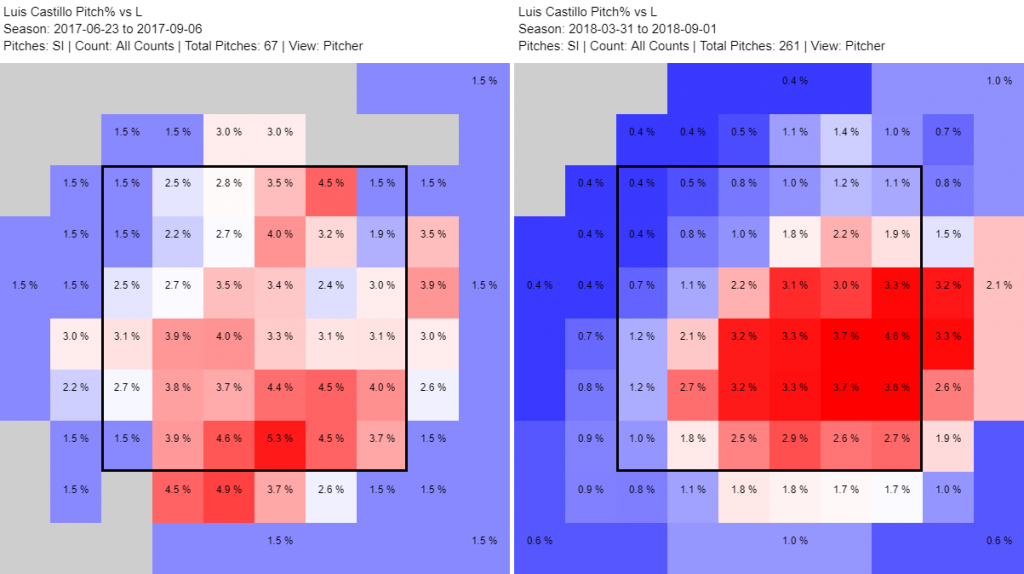 His inability to keep the sinker down in the zone has been harmful against hitters on both sides of the plate, but particularly against left-handers, who have managed an average exit velocity of 95.0 mph — quite the contrast from last season (89.8 mph). Unlike his four-seamer, Castillo’s sinker is getting less vertical movement — by almost half an inch — than it did a year ago. It’s not a huge number, but it’s enough to make the difference between a whiff and contact and makes the pitch less deceptive to hitters. Last year, Castillo’s sinker persuaded hitters to chase outside the strike zone 32.0% of the time, an above-average percentage; that rate is down to a below average 26.9% this season.

The four-seamer and sinker are particularly important for a pitcher who relies heavily on a changeup. Castillo has to establish the heat to make his elite changeup effective. Lefties are whiffing 26% of the time they see the change in 2018, which is still an outstanding rate for Castillo. When they put the ball in play, the outcome hasn’t been as favorable as it was in his rookie season. Hitters are slugging .402 on the pitch — not that bad of a number on the surface until it’s compared to the meager .217 showing against Castillo’s changeup in 2017. At least part of the blame likely lies at the feet of his poor fastball command and over-relying on his change even when his fastball isn’t working on a particular day. So where does that leave us? Would he benefit from throwing his slider more often against left-handers?

One intuitive reason this may be effective is it moves on a different horizontal plane than all of Castillo’s other pitches. His four-seam, sinker, and changeup all tail away from lefties. The slider, conversely, moves toward the hitter. However, Castillo mostly utilizes it when squaring off against righty hitters. It’s his least used pitch to begin with (16.5%), and it’s his pitch of choice on only 8.9% of his deliveries to the plate against lefties. The breaking pitch flashes plus at times, though it has clearly taken a back seat to the changeup for Castillo — and deservedly so. But on days when his fastball command isn’t working and he can’t establish his change as well, it might be worth it to go with a slider more frequently.

Since he throws the slider infrequently against lefties, there’s a limited sample to draw from. The data available, though, shows Castillo has found success with the breaking ball. When lefties have swung at the pitch the last two years, they’ve missed 35.6% of the time (league average during that span: 33.5%). When putting it into play, they’ve hit it on the ground at a 53.8% clip and managed a .236 xSLG. Those stats are nice, but they’re heavily influenced by last year’s results. In 2018, Castillo has also struggled to located his slider at times, leaving it up and over the plate instead of burying it at a left-hander’s back foot. 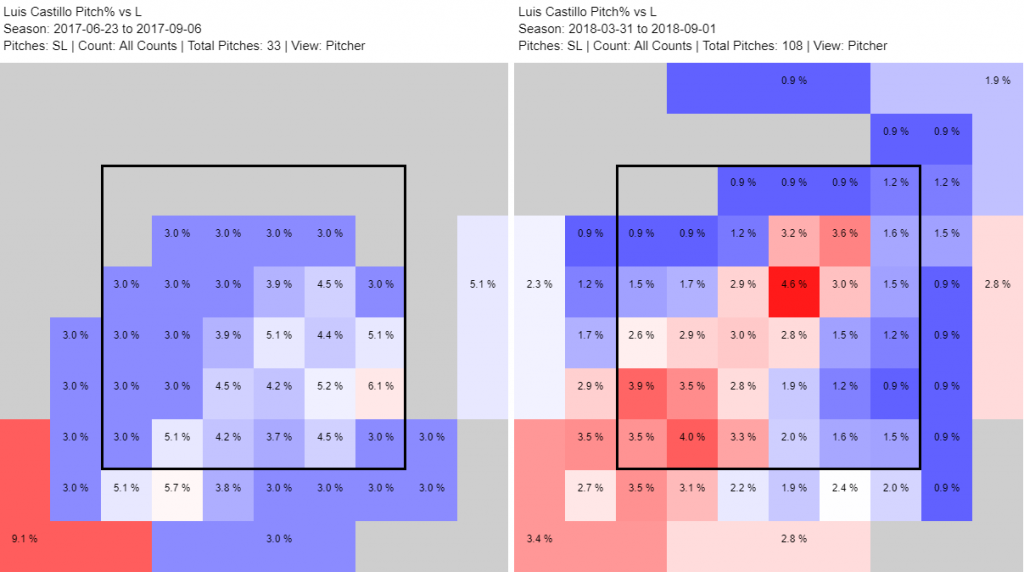 Pitch selection is also problematic at times. With two strikes, Castillo still throws his fastball or sinker to left-handers 47% of the time. Hitters slug .561 (.541 xSLG) in those situations. When he throws a changeup or slider, they slug just .271 (.232 xSLG). In 3-2 counts, the decision to throw a fastball makes sense if it’s the pitch he feels he controls best. Otherwise, it might not hurt to get a little more creative in two-strike situations.

At the end of the day, the answer to the question about Castillo’s problems with lefties is simple: He needs command to get hitters from both sides of the plate out consistently. It’s especially true now that he doesn’t possess the extra ticks on the radar gun he had last year. He still has enviable velocity; he simply can’t get away with mistakes as often.

When he’s placing the baseball where he wants it to go and keeping it out of the middle of the plate, as he did on Saturday, he demonstrates his ace potential. When he doesn’t, he has a particularly hard time getting lefty hitters out because three of his four pitches have arm side ride — meaning they have a tendency to dart back over the heart of the plate when he misses his spots. The right-hander’s mechanics allow him to pound the strike zone consistently — now it’s about finding mechanics that help him paint the corners regularly.