IÃ¢â‚¬â„¢m just coming out and saying it:Ã‚Â  I have a man-crush on Cody Reed. IÃ¢â‚¬â„¢m not sure how it came to pass. Perhaps itÃ¢â‚¬â„¢s the goggles triggering me back to those heady hot-corner Sabo days. Maybe it has to do with the due diligence (such as it is) that I did when the Johnny Cueto trade went down. While everyone was rightly pointing at Brandon Finnegan as the linchpin of the deal, I told anyone who would listen that I thought Reed was the dude who would make the trade fondly remembered.

Whatever the reason, I root hard for Cody. I move my chair a little closer to the television when he takes the bump. My heart is a roller coaster that swells with every strikeout and sinks with every meatball that drifts back over the dish. So, the news that he has moved into the rotation has me checking my popcorn supplies and the level in my bottle of Woodford Reserve.

ItÃ¢â‚¬â„¢s easy to forget that he was once pretty dominant in Pensacola and Triple A Louisville. The catcherÃ¢â‚¬â„¢s mitt would sing when his fastball touched it. His big league appearances were disappointments in comparison, but even then you could see flashes, the occasions he would make big league hitters like Kris Bryant look foolish with his change. However, too often it seemed as if opposing batters knew exactly what was coming, and indeed, we heard rumors he was tipping his pitches. Or perhaps it was just his deliveryÃ¢â‚¬â€long-limbed and wide openÃ¢â‚¬â€that ransomed away his secrets.

Back to Louisville he headed to make the kind of mechanical changes necessary to make batters begin guessing again. Since then, the road has been rough and uneven until recently when he began to show flashes of the pitcher the Reds thought they were getting from Kansas City.

Brooks Baseball has the skinny on Reed:

Cody Reed has thrown 1,538 pitches that have been tracked by the PITCHf/x system between 2016 and 2018, including pitches thrown in the MLB Regular Season and Spring Training. In 2018, he has relied primarily on his Slider (88mph) and Fourseam Fastball (94mph), also mixing in a Sinker (93mph) and Change (87mph).

The pitcherÃ¢â‚¬â„¢s mound is a vertiginous place. Standing on the highest part of the playing field, it must, at times also be a lonely place, a tawny ground where itÃ¢â‚¬â„¢s easy to lose not only oneÃ¢â‚¬â„¢s footing, but oneÃ¢â‚¬â„¢s entire self in the moment. Pitchers are a community of one, the initiators of the action, the sole bearer of the news, both fair and foul. For Reed, it will be place to face down past disappointments and start down the path of redemption, offering proof he belongs in the big leagues.

During a stoppage for a review of a call recently, Reed called Tucker Barnhart out to the mound to talk to him for a moment:

The truth that baseball can be a cruel game is found in this cold fact: pitching prospects have more than a 50% bust rate. Cody Reed takes the mound, the first test on his long quest to beat the odds. Not to worry, though. He lives for this. 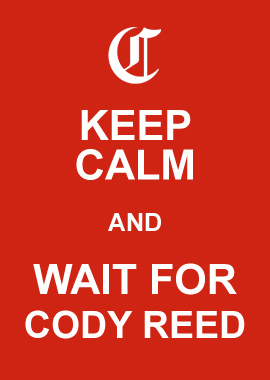