When you’re in your early 20s and convinced that time goes fast and that you must live in the now or risk losing the future, you forget that a baseball season takes a lifetime. Or, to be less melodramatic, a gestation period at least.

Since the Reds’ season began, I have started dating a girl, won some awards for student journalism, been accepted to graduate school, graduated from college, stopped dating the girl, moved into a new apartment, started writing for The Hardball Times, and met Reds GM Dick Williams. Like full handshake and all.

Yes, this is a humblebrag and I can’t work my way around it, but my point in listing all of this is more to say: I’ve lived a lot in the last six months and the only thing that’s stayed constant is the Reds (non-existent) playoff hopes. I guess some grounding did me good.

What I’m saying is there’s another month left in the season, which means it’s too early to write a postmortem and too late to enact meaningful analysis on the Reds that hasn’t already been covered in one way or another. The body is dead; the question becomes should you bury it in its Sunday best (Matt Harvey) or not.

Instead, I will give you with a series of notes, some more logical and coherent than others, that look forward to 2019. Will the Reds win the Central next year? Maybe. I don’t know. There’s always a chance. I think it all depends on:

Yes, and it’s going to continue to be a problem. As long as the Reds employ Homer Bailey in any capacity, the pitching will only be 80% as effective as it can be. BUT, Luis Castillo has been lights out since the All Star Game, Anthony DeSclafani has too (outside of last night), and Tyler Mahle looks like he’s recovering his form down in Louisville. Don’t believe me?

You get those kinds of numbers for a season and you have a strong, strong staff top to bottom. Even if all three of those guys pitch closer to a 3.50 ERA than a 2.00, I’d have immense confidence in running them out every day. Sign a frontline starter, a No. 1 or No. 2, and Homer Bailey’s deadweight looks less cumbersome.

Ã¢â‚¬â€ Team chemistry.Ã‚Â There’s a chance I’m only bringing chemistry up because I’ve been on a RomCom binge of late and chemistry is just important, dangit! My Netflix habits aside, the highlight of 2018 for me has been watching this team have fun together. Be it Eugenio Suarez and Jose Peraza or Jesse Winker dancing or Joey Votto’s usual antics, the team knows how to have fun.

While that chemistry should translate to next season, there are some causes for concern. Matt Harvey seeming to be a big clubhouse guy is one that comes to mind. Young guys not knowing what the heck they’re supposed to be preparing for is another. If the 2019 Reds can pull together and frankly just have some fun, I think we’ll be in business. If not, the Astros might be able to offer some advice.

Winker, Ervin, Schebler will be one hell of a defensive liability but by god will they rake

Sometimes I say things on Twitter simply because I have the ability to do so but other times I say things with the intent of baiting a reply and this tweet is definitely an instance of the latter, which is nice because Jason Linden so kindly took the bait.

I cannot undersell how euphoric it is to hear Phillip Ervin strike a baseball. It’s as if the outfielder has managed to distill the art of hitting to nothing more than its purest state, super heated that resulting liquid, and allowed it to course through the wooden grains of his bat before unleashing a human-wielded anvil on an unsuspecting ball. It’s the Thor hammer of bat sounds. The Wonderboy carved out of a lightening tree. The one thing giving me irrational faith that the Reds’ outfield next year will just tear the ball to smithereens.

I’m not worried about the infield at all. When the biggest question is “Do we start an All Star from last year or this uber-prospect we have,” there’s not too much to keep you up at night. Geno will hit. Jose Peraza is young and looking better by the day. Joey Votto is old but still a force.

The outfield though could give this team some fits. If Winker and Schebler hit as expected, this lineup will have some thump. Add in Ervin’s potential Herculean bat and that’s some serious firepower, even if he comes off the bench.

Ã¢â‚¬â€ The Scooter Conundrum.Ã‚Â So, uh, about that question I just mentioned. I don’t have a good answer. Sorry.

Since the All Star break, Scooter has crashed back to earth, posting a 90 wRC+ in 123 PAs. For the more counting stat inclined, that’s a .263 average with only 3 home runs. It hasn’t been pretty.

But that’s a small sample and Scooter has been very good for the Reds over the past couple years. Even if I think it’s a flash in the pan, there’s a better than zero chance Scooter’s for real and should stay in the lineup for one more season. Also, Nick Senzel could potentially add some depth in the outfield if he can indeed field the position.

More than anything, I think the Scooter Conundrum just needs an answer. This goes back to the players not knowing what the vision is for the team because the fans are also pretty out in the dark. Some indication regarding Scooter and Senzel would be appreciated. It’s not that either option makes the Reds worse in 2019; it’s the uncertainty that breeds contempt and in-fighting that will hurt the team. (I’ve watched enough RomComs at this point to know that uncertainty makes for a good plot but a bad relationship.)

This season has taken a lifetime and next season will take another, but hopefully the excitement next summer will stay on the field. Please.

Prospect to Watch:Ã‚Â If he’s still available in fantasy leagues, I’d be surprised but Touki Toussaint is worth all the hype. He’s got No. 1/No. 2 potential with some serious third time through the order issues, but he looked very sharp in his debut. Look for him to grab one or two more starts through September, a good way to add some points for the home stretch.

With only a month before the season wraps up, it seems unlikely that I will garner the 36,000 views needed to get to 100,000. But there is hope. There is always hope. (And Matt Wilkes is still looking up.) 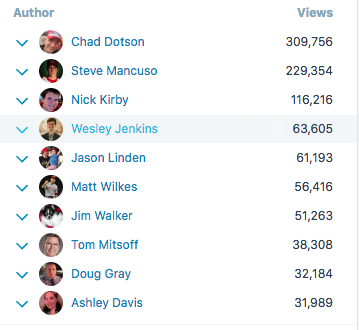