Billy Hamilton had two hits in what could be his 659th and final game in a Cincinnati Reds uniform. Both Hamilton and Harvey were claimed on waivers, and the Reds have until tomorrow to make a trade to the mystery team or they will remain Reds through at least the end of the season.

Anthony DeSclafani got hurt again by the home run ball, and the Reds offense was held in check by Cole Hamels. The Reds collected four hits, a couple of them cheap hits, before Hamels recorded his fifth out. Hamels didn’t allow that to impact his start, and threw just the 11th complete game in the NL this season. 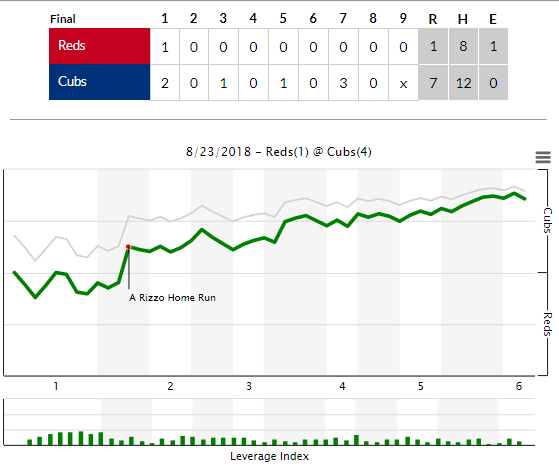 According to FangraphsÃ‚Â WPA statisticÃ‚Â (winning percentage added), the most important play of the game wasÃ‚Â Anthony DeSclafani allowing a 2-run home run to Anthony Rizzo with 1 out in the first inning, giving the Cubs a 2-0 lead.Ã‚Â That play decreased the Reds chances of winning by 17.4% (from 54.9% to 37.4%).

Billy HamiltonÃ‚Â had two hits. The first one was pretty cheap, but I am sure he isn’t complaining. He did get picked off. 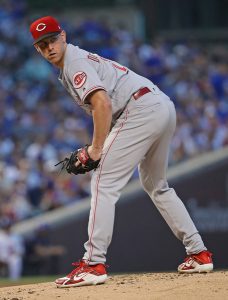 Anthony DeSclafaniÃ‚Â seems close to getting back to a middle of the rotation starter, but the home run ball continues to bite him. He allowed 2 HR tonight, and has allowed 17 home runs through his first 14 starts of 2018. The rest of his numbers look good, so it’s probably fair to be optimistic that with more starts he will be able to locate his pitches better and cut down on the dingers. The home run he allowed toÃ‚Â Javier BaezÃ‚Â was the second longest HR of 2018.

Eugenio SuarezÃ‚Â went 0 for 4 with 2 strikeouts, following his off-day on Wednesday. It snapped a very modest 5-game hit streak. 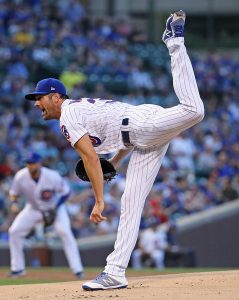 Thom BrennemanÃ‚Â is just unbearable. I am so thankful forÃ‚Â Chris WelshÃ‚Â to give the Reds broadcast at least a glimmer of hope.

For the love of all things holy Thom please stop saying “top run producers” when you are referring to RBI leaders.