It’s easy to forget now, but at one point, Cody Reed was one of the most highly prized pitching prospects in the game. As recently as 2016, he was rated the Reds’ No. 2 prospect and was the 34th-ranked prospect in baseball, per Baseball America. There was legitimate hope that he’d become a top-of-the-rotation arm on the next contending Reds team and would ultimately prove to be the crown jewel of the Johnny Cueto trade.

Flash forward two years, and he’s only thrown 75 2/3 big-league innings and posted a 6.54 ERA in that time. So you’ll be excused for forgetting about him coming into this season. But it’s time to start paying attention to the young southpaw again.

The problems locating his pitches seemed to come out of nowhere. In 2015 and ’16 combined, he had a 7.1 BB%. Had he suddenly developed a case of the yips that would derail his potential to be an effective big-league pitcher? From afar, it may have appeared that way, especially when coupled with his comments about struggling with confidence. These factors are why many had understandably soured on Reed coming into 2018. You’ll notice, though, that his peripheral numbers are much better this year. Why? The control problems have disappeared.

Reed walked only 6.9% of the hitters he faced in the minor leagues this year, and it helped fueled his success. An uptick in strikeouts went a long way in helping, too. His K-rate rose to 23.5% this year, well above his 21.5% mark in 2017. Between July 19 and August 8, Reed posted a 1.38 ERA, struck out 33, and walked only three in 26 innings, earning him another chance with the Reds.

Due to the erratic performance of Robert Stephenson last Wednesday, Reed got a chance at an extended outing in his second appearance back in Cincinnati. He gave up two runs on a wall scraper of a home run, but was otherwise very impressive in his 3 2/3 innings of work. The lefty pounded the strike zone, throwing 35 of his 52 pitches over the plate and walking only one hitter. For further evidence of his improved control, look no further than his first-pitch strike rate. Last year, it was 38% in 17 big-league innings; this year, it’s up to 63%. Those are undoubtedly small sample sizes, but they indicate the improvements other numbers are showing as well.

From a pure eye test perspective, something looks different about the way Reed is throwing the ball. His delivery looks smoother and he doesn’t appear to be overthrowing. Certainly, renewed confidence and a better mentality have helped Reed, too. Those improvements usually don’t come without a mechanical adjustment, though. A look at the video reveals a few subtle differences in Reed’s delivery to the plate this season.

The biggest knock on Reed has always been his long, wide open delivery to the plate. It doesn’t hurt him against lefties (career .294 wOBA), but it can — and has — against righties (.411 wOBA) in his major league career. Here’s was the scouting report from FanGraphs right before Reed made his debut in 2016:

Because ReedÃ¢â‚¬â„¢s arm slot is just below the three-quarters mark and his arm action is a little long, right-handed hitters get a nice, long look at the ball out of his hand and will punish his fastball if it catches too much of the plate or if he falls behind and into obvious fastball counts.

This year, Reed has seemingly made an effort to speed up his delivery and reduce the amount of time hitters can look at the ball before it’s coming at them. Even at full speed, there’s an obvious difference in Reed’s approach to the plate in 2018: He doesn’t bring the ball behind his body as far, instead moving it in a more straight-back motion.

In years past, hitters got a good look at the ball behind Reed before he delivered to the plate. Presumably, this allowed them to track the ball for just a split second longer; whether or not this was enough time to get a glimpse at his grip on the ball is impossible to know without asking an opposing batter. However, it does make his motion to the plate quicker, and that extra bit of deception doesn’t hurt.

But don’t take my word for it. Take a look at the side-by-side photos (2017 on the left, 2018 on the right) at the point where the ball is the furthest behind Reed.

Slowing things down a bit, it becomes more clear how he’s made a conscious effort to hide the ball better. This is particularly important against right-handers, who have crushed his fastball throughout his stops in the majors. As he starts his windup, Reed now holds the glove closer to his body and turns his shoulder slightly more toward the plate, thus blocking hitters from seeing it clearly and tracking it throughout the delivery and out of his hand.

The difference is subtle (click on the photo if you need to enlarge it), but it makes picking up the ball just a bit more difficult than it already is. In this particular at-bat, Reed got AL MVP candidate Jose Ramirez to fly out from the right side of the plate.

Now let’s show his delivery from 2017 (top) and 2018 (bottom) in full speed. Note how Reed comes to the plate ever so quicker this year, giving the hitter a fraction of a second less to track the ball during the wind-up.

Without being a pitching coach or an expert at breaking down film, it’s hard to point to exactly what has helped Reed recapture his command of the strike zone based on the limited video available. For most pitchers, however, it comes down to finding a repeatable delivery and consistent arm slot. Reed seemed to struggle with the latter part of that equation last season. Granted, the data is limited given his lack of big-league innings, but the difference is notable when comparing his vertical release point from last September — when he was likely still tweaking his mechanics to eliminate control problems — and now. 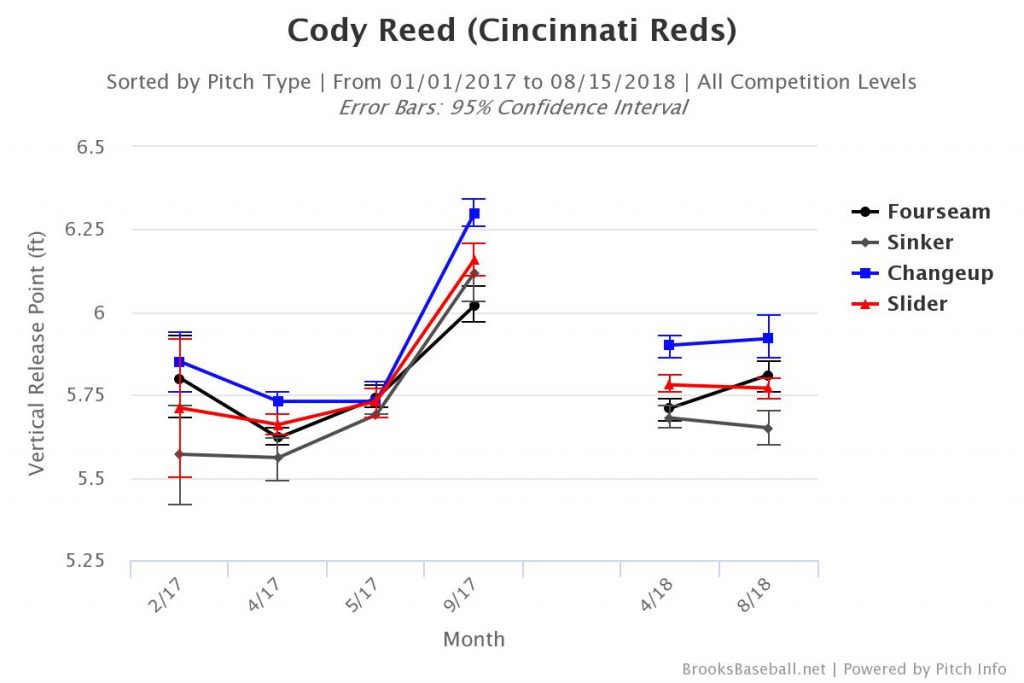 Whether he’s changed it throughout the year in the minors is impossible to tell from the available information. From the data we have, Reed has seemingly found the sweet spot with his delivery, which has stayed mostly the same between April and now.

Do all of these mechanical changes mean Reed is going to become a reliable starter on the next good Reds team? No. Right-handed hitters still have a .337 wOBA against Reed this season — an improvement from the last two years but still higher than ideal. What the changes and subsequent improvements do mean is that he deserves another shot in the major-league rotation.

If and when Matt Harvey is traded, Reed should be the first pitcher given a chance to take over the vacant spot in the rotation so the club can find out if his success starting in Triple-A translates to the majors. If he can be even average against righties, his dominance against lefties will make him a successful pitcher — though it’s also the reason he could ultimately end up in the bullpen to stay. But there’s only one way to find out, and that’s to let him start right now.