Crosley Field was cramped, crumbling, and trapped in a disintegrating neighborhood, and both the Reds team and their fans were scrambling to enter the shiny round multipurpose stadium on the river. Great cheers arose when Pete Rose, Jr. swung a wrecking ball to bring the old girl down.

In the rush to clear out, the Reds conducted an auction of Crosley’s assets. One item was a hot tub from the locker room. Pizza emperor Buddy LaRosa nabbed it for his Golden Gloves for Youth boxing program.

The hot tub arrived stuffed with fabric. LaRosa had purchased the tub and, unbeknownst to him, everything inside. Buried amongst the towels and sacks was quite a large triangle of felt-like material. It was the Reds’ 1939 National League Pennant–this was back when you won a pennant, you actually, literally won a pennant– and, good Cincinnatian that he is, LaRosa kept it in dark safety until there was an appropriate place to put it. He happily donated the pennant to the Reds Hall of Fame and Museum as soon as it came into existence thirty years later.

The archivist volunteer in me was furious when I heard this story. “How did that happen?” once demanded of a co-worker who, unlike me, was alive at the time, and who understood. “How could they just leave everything like that?”

“You have to understand the times,” he said. “People got out of there like it was a burning building.”

What we have left of Crosley is a wall along Findlay Street, or part of one. A few iron seats, maybe a locker. They did move home plate to the new place. But that’s about it. We had a single opportunity to preserve more, and we missed it. We must now content ourselves with spray-painted lines on a parking lot where Jackie Robinson once ran.

You can’t take it with you.

Baseball fans try. Pushing back the curtain to the Reds Hall of Fame storage area while working at Reds Fest a couple years ago, I suddenly realized that someone had to design a way to move a World Series trophy, and that way involves a giant cardboard box marked “1975 WORLD SERIES TROPHY.”

There’s more to it than that, of course. It involves multiple employees, grabbing by the trophy by the bottom, and some custom foam action. You don’t just hurl it in the back of a U-Haul. A fair bit of work goes into bringing one home and taking it back out again.

Not every team has one of these boxes. Unlike in many cities, the Reds’ trophies are properly displayed where the fans can see them, squat down to read the little engravings on the little gold pennants, and roll about in their reflected glory.

Some who have won the World Series don’t even have a trophy to put in a box; while the Reds have won five, they only boast three Commissioner’s Trophies, as these only came into being in 1967. The first Reds team to win a championship received a giant bat, although no one seems to know what happened to it, which is a tremendous pity. But the trophies we do have boast their own custom travel cases and individual lighting. The 1990 trophy does not live in the shadows of the one earned in 1976.

The sight of such a thing was an abrupt shift from my high school, a volleyball and basketball powerhouse, but still a small womens Catholic academy were pep rallies were once-a-semester command performances. Mother of Mercy High School didn’t have a band and we didn’t have a giant stadium with LED light poles, but a school with a century’s worth of history did house trophy cases scattered throughout its rambling building, gold track batons crammed in with ponytailed figures frozen in a backswing and plastic basketballs perched atop wood plaques.

The trophy I helped to hang in glory was a 3rd place plaque from the 1995 Cincinnati Bar Association’s Mock Trial competition, and I always took small comfort in the fact that should the entirety of the Tri-State become buried in radioactive ash, future archaeologists would know that Mary Beth Ellis did a fairly good job memorizing her opening statement and stomping about in her navy blue power suit.

It never occurred to me that perhaps someday the school would not be left to find.

Last week I found the plaque on the floor of Mercy’s gym, parked next to various yearly scholarship recognitions, my cousin’s entry in the McAuley High School Athletic Hall of Fame, and piles of plastic theater participation awards. Trophies and religious articles were available for the taking; student art, pews, and desks went for anything from $15 to $75. While some of Mercy’s artifacts are now safely located in the merger location of our sister school, McAuley, little prepared me for seeing the classroom where I studied Beowulf now a maze of price-stickered tables holding crucifixes, photos of dead archbishops, and abandoned laptops.

This was an asset sale, an estate liquidation; nothing was trussed up like the windows at Tiffany, but when the email to the alumnae advertises “memorabilia” and you show up to see six-foot gym signs listing the state-qualifying tennis teams being carried out in the arms of strangers, you are going to stand and deliver for a few moments on your own mortality.

I rescued my cousin’s face and the commemoration of our Mock Trial 3rd place glory, and held them up for inspection to the poor volunteer who had the grisly task of overseeing the carcass-picking.

“No charge,” she said. “We just ask that you treat them with respect.”

I belted my cousin and the Mock Trial triumph into my car, and then, like all great and wounded artists in the great sweep of time, complained about it on the Internet. I have joined the great masses of the 21st century by attempting to solve a problem by pointing my phone at it, and, like nearly all the rest, find that it remains a problem.

Several fellow alums took me to task: “It’s not all gone. Some of our art is already installed at McAuley. This isn’t helping the current students trying to get through the merger. Why are you holding on to your anger? Don’t you know Mercy is in our hearts and memories and not a building and things? Why don’t you care more about people and relationships than statues and trophies no one even looks at?” 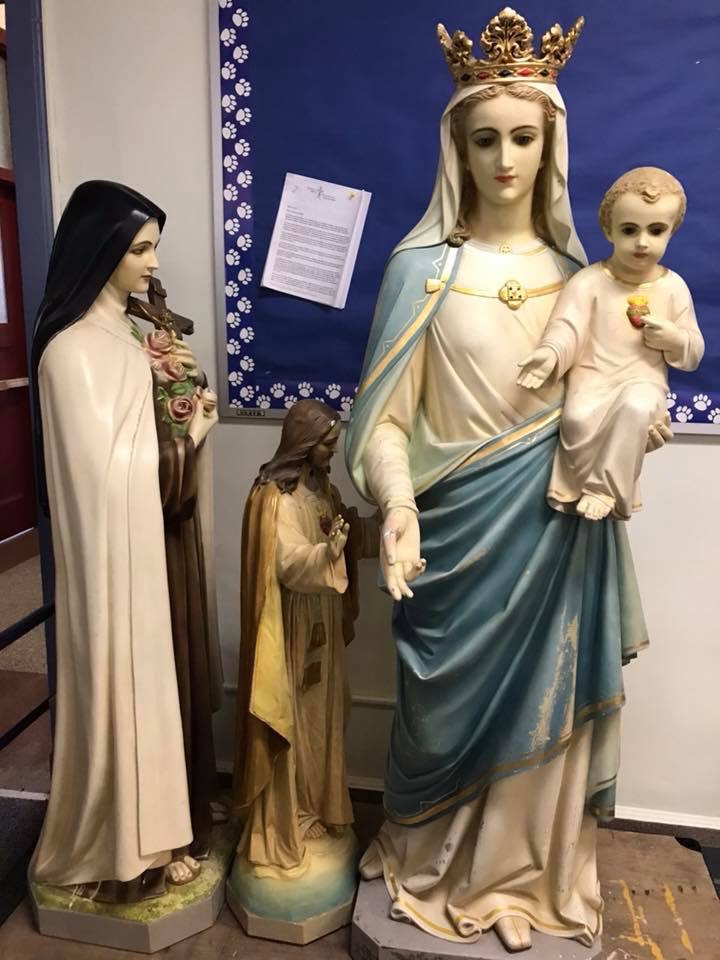 There’s truth to this, of course, but all I saw was once-towering hallway landmarks lowered to ground level, Jesus staring at His mother’s butt. This wasn’t right. I was hideously anxious and depressed for the first part of my high school career, just garden-variety depressed for the next third or so, and scrambled into glorious near-chemical equanimity by the end. I achieved this, in part, by discovering kind classmates, American history as a fascinating story, and writing as a thing to stick around to do. The scenery of that journey was now wheeled out onto Werk Road on dollies, and I am not the only one with a “This school helped save my life” story to tell.

I keep a photo of my dead father in a nice frame in our living room, not Scotch-taped to the back of the toilet. The treatment of our inantimates reflects our love for the lives with which they interacted.

There’s a respectful hush when most fans enter the trophy room at the Reds Hall of Fame. Children are shushed and the music is sweeping. People know they’re in tremendous historical company– not just via the hardware, but in the prizes that were never won to begin with: The photos of the 1961 Ragamuffin Reds, the captions telling the story of the 1999 run.

But isn’t this just stuff? Isn’t that Mock Trial plaque merely something my nephews’ children will eventually heave into a Rumpke dumpster along with my measuring cups, my unburned candles, my hardback books?

What about the young ladies who passed through four years of high school never having joined a team, won a scholarship, or held a club office? Weren’t they here, too? Players who never make the Hall of Fame or a championship roster, who fill out the 40-man year after year, who lurk in the minors for a decade… all part of the tale.

I once took a baseball historian colleague who covers the Indians through the Reds Museum. I inquired about plans for a Tribe museum, given that they weren’t all that far behind Cincinnati in the matter of amassing a professional baseball team.

She shook her head. “No. I haven’t heard any plans about something like that.”

“But why? Is it because people don’t care, or because there’s nothing to put in it?”

“There’s nothing to put in it,” she said, “because people don’t care.”

Grand achievements, of course, happen even minus the trophies to mark them. Sometimes, like the way one of my fellow alums took her first steps after a debilitating stroke, they take place for an audience of zero.

The record books will perpetuate as long as we care to perpetuate them and the fans tell the stories. But I’m the daughter of a woman whose alma mater was also shuttered, the name of which is now never mentioned except by that dwindling number who attended it. Have you heard of Our Lady of Angels High School? In 30 years, will you have heard of Mother of Mercy High School? Does it matter if you haven’t?

It existed, and it was good. And maybe that’s enough–except sometimes, the few undertake the rescue work for the many.

This past winter, Mercy held the final installment of an annual fundraising dinner. An alum painted a picture of the iconic Blessed Mother statue which once stood outside the school as an auction item. The numbers soared into the night. When the bidding ended, the auctioneer asked the winner to stand.

Buddy LaRosa rose from his seat. 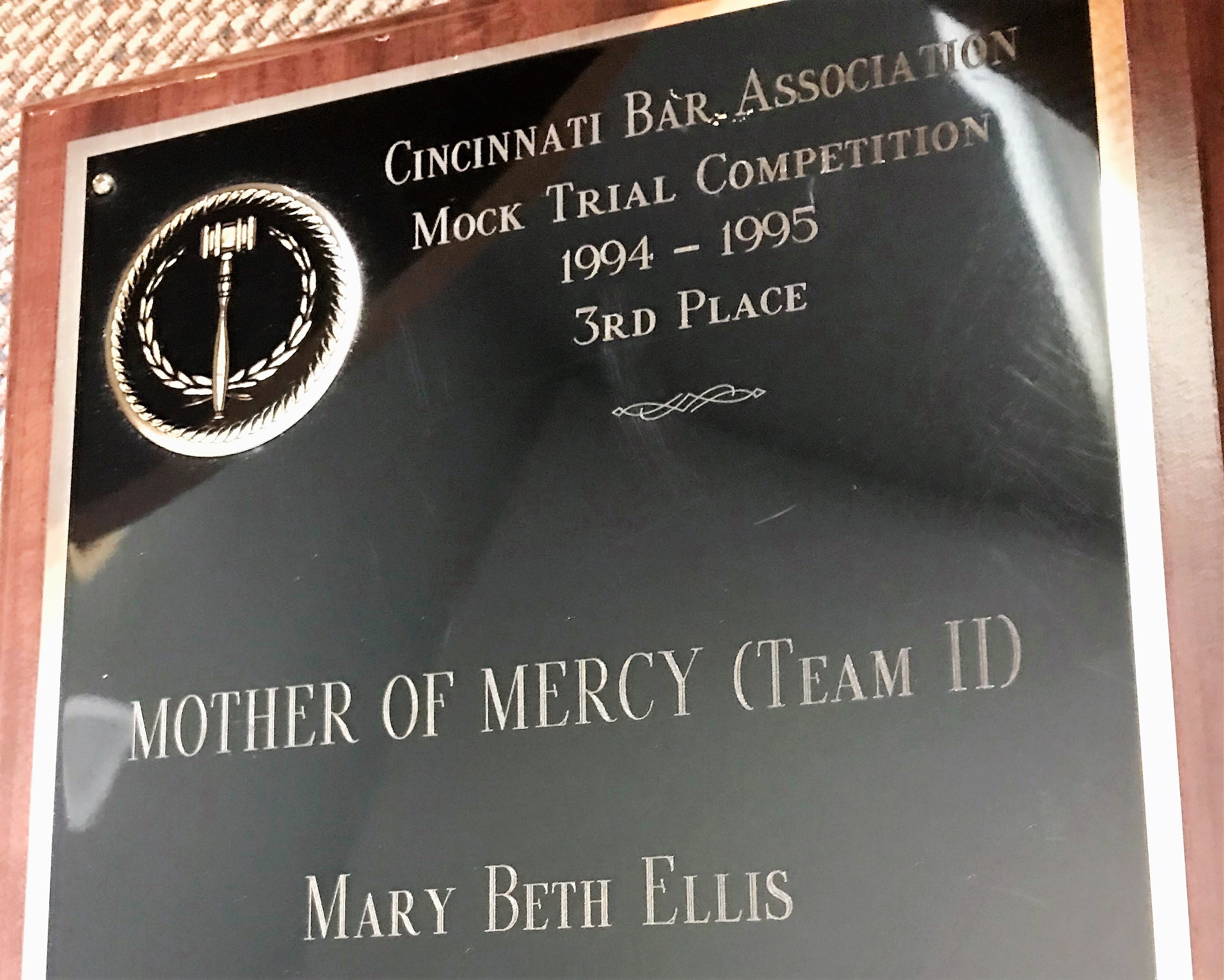