Earlier this year, Matt Wilkes gave us an in-depth look at the collective arsenal for Reds pitching. Ã‚Â Today, we will look at the Reds offense and see who has been most effective at hitting each type of pitch.

A quick refresher on the metrics that I used. There are two Pitch Type Linear Weights that are produced by FanGraphs; total runs above average per pitch (wFB, wSL, etc.) and standardized runs per pitch (wFB/C, wSL/C, etc.). The former is cumulative and depends on how many pitches a player sees, while the latter is normalized based on 100 pitches which increases accuracy when comparing players against each other.

I also looked at some more familiar metrics from Baseball Savant which you can read about here.

Another note, when comparing among the Reds players, I lowered the minimum plate appearances to include Scott Schebler and Jesse Winker. While the pitch type value stats are susceptible to small samples sizes and are not predictive, I wanted to include them due to their strong performances and, after all, this is just for fun.

Despite leading the team with 11 wFB, Eugenio Suarez takes a back seat when accounting for total pitches seen. Winker and Schebler have posted wFB/C of 1.57 and 1.54, respectively, sitting well ahead of SuarezÃ¢â‚¬â„¢s 1.12. Both players Statcast results have actually taken a slight step backwards from 2017, indicating how well they were hitting fastballs last season. The one area that they have both improved is swing and miss percentage.

Schebler has seen fewer four-seamers in the zone than any of his previous three seasons which has led to a higher BB%. He also still has crazy strength and can destroy 97 mph pitches out of the zone, which is just fun to watch.

At the total level, Suarez is comfortably ahead of Votto and Gennett with 7.8 wCT, which also ties him for 1st in MLB with Matt Carpenter. Normalized, he bumps down to 6th in MLB (6.01), and is surprisingly just ahead of Billy Hamilton who ranks 8thÃ‚Â (5.27). Suarez has been hitting cutters harder each of the past two seasons. 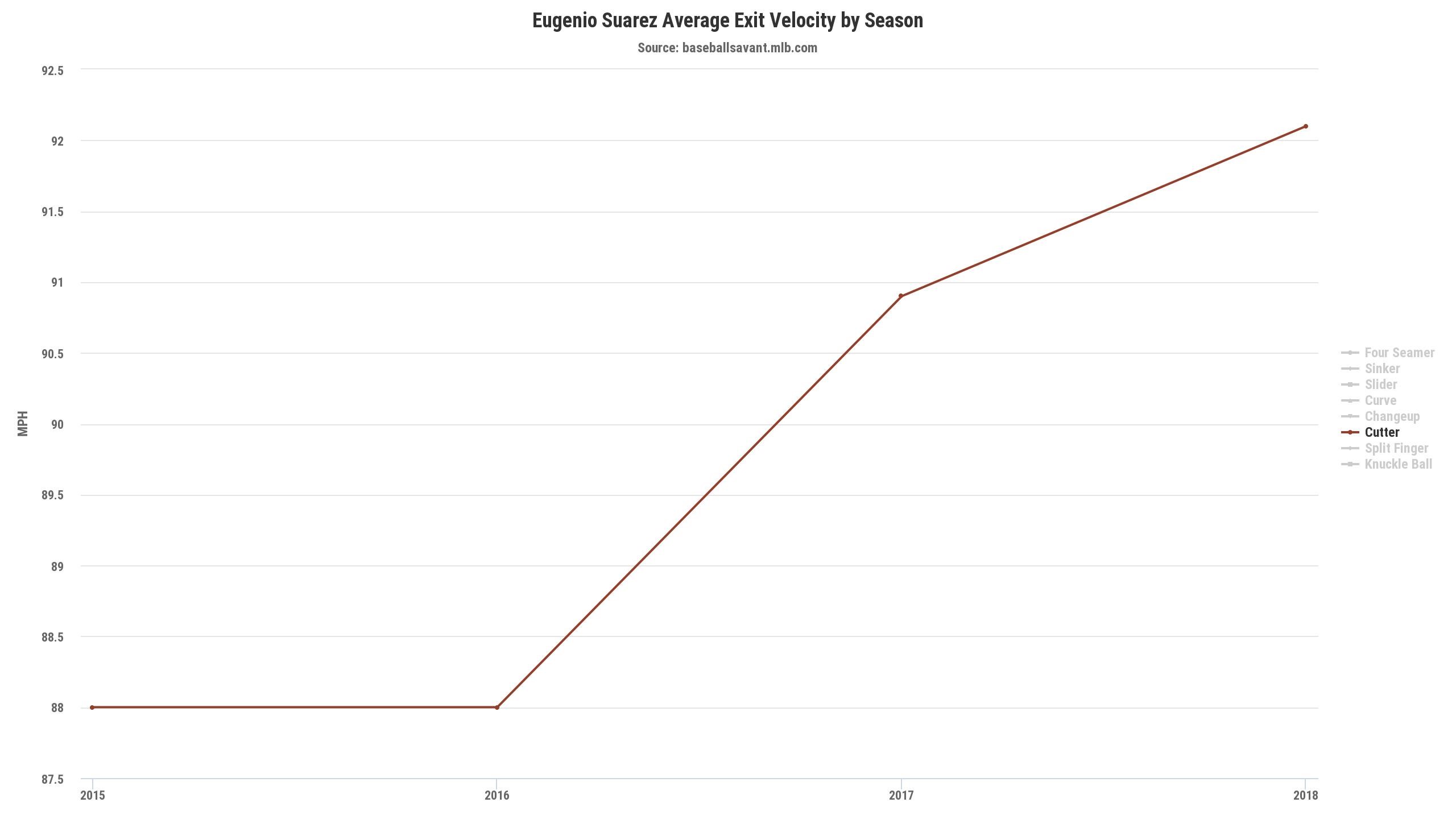 With an exit velocity of 92.1, the cutter falls just below the sinker in terms of Suarez’s hardest hit pitch. But it is second to none when it comes to Statcast metrics. Suarez has mind-numbing numbers, posting a .566/.523 wOBA/xwOBA & a .958/.892 SLG/xSLG. This is a clear case of small sample sizes inflating the numbers, but you cannot blame opposing pitchers for only throwing this 6.2% of the time.

Votto makes his way to the leaderboard with a strong showing against sliders in 2018. His 7.2 wSL is 7th in baseball and well ahead of Scooter Gennett, while his 2.9 wSL/C is good for 3rd in all of baseball.

While VottoÃ¢â‚¬â„¢s exit velocity against sliders is actually down, a major improvement has been cutting down on swings and misses. 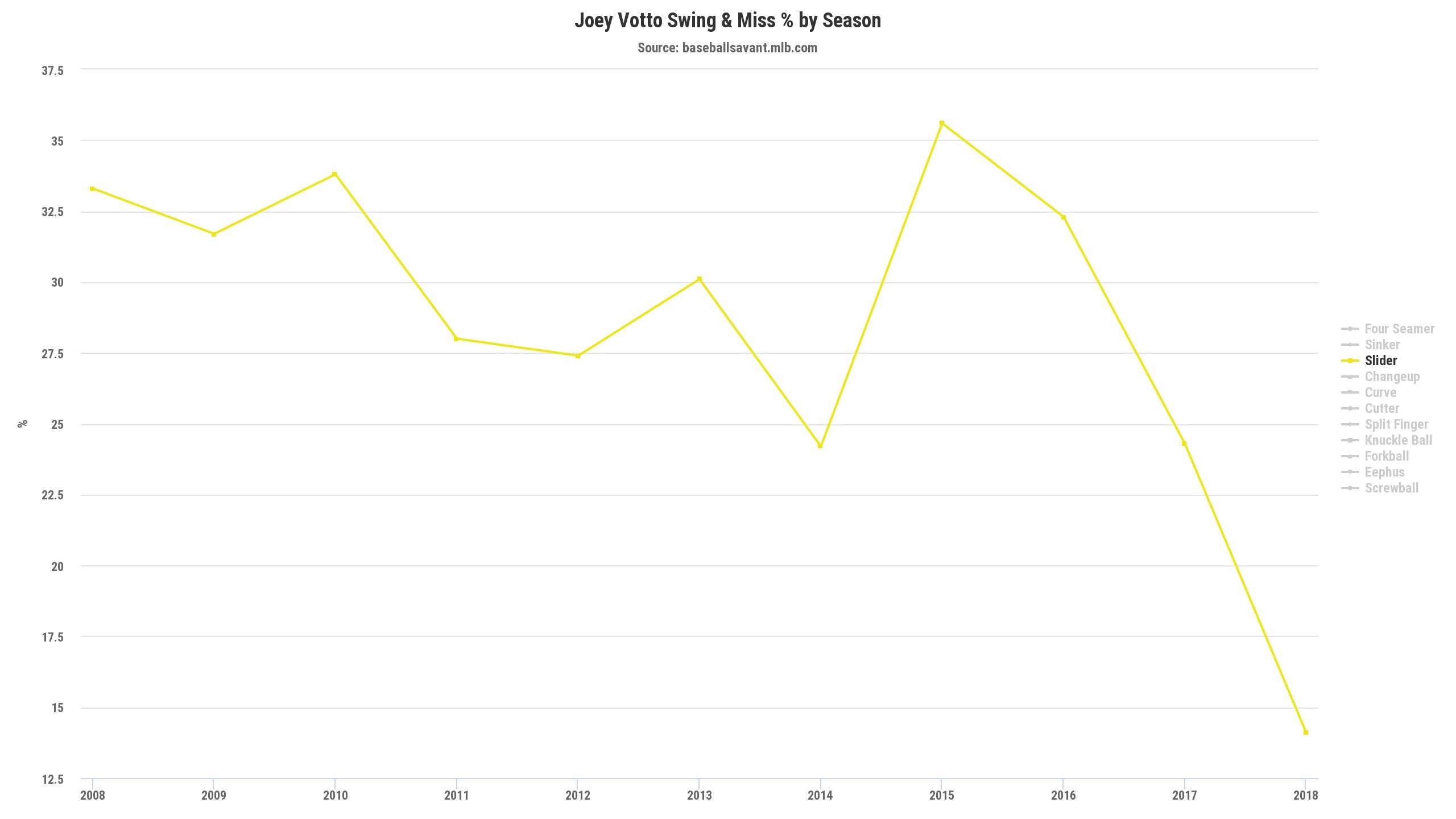 Since 2015, which was the highest of his career (35.6%), he has steadily dropped all the way down to 14.1%, by far the lowest of his career.Ã‚Â  So while the power is down a bit this year, Votto has become an even tougher out against a tough pitch.

Back in May, I wrote about Suarez crushing baseballs, taking no exception to breaking pitches. Not much has changed as he is leading the team with 6.9 wCB and 4.4 wCB/C. Those marks are good for 8th and 6th best in the majors, respectively. Scooter is the next closest Reds on a leaderboard (30th) with 4.3 wCB.

While it is not his strongest pitch to hit (cutter), Suarez has shown the most improvement against the curveball in 2018, according to wOBA. 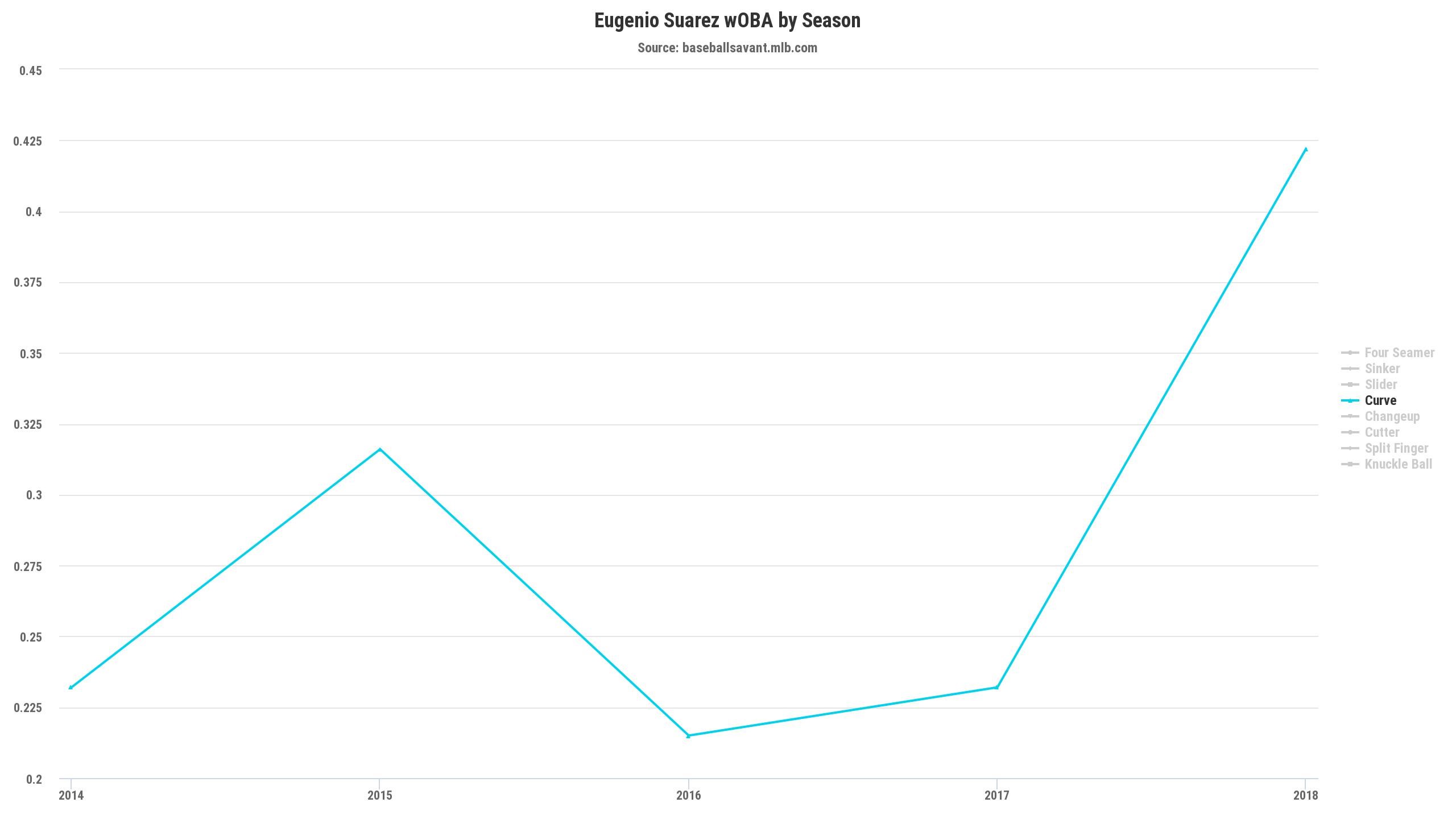 It has been a balanced approach that includes a higher barrel percentage, higher exit velocity and fewer swings and misses. And as always, the swing does not get much prettier.

Not to be left out, Scooter has posted strong numbers with a 8.1 wCH and 4.2 wCH/C, well above Suarez. It is also good for 8th in MLB in both metrics.

One factor playing into this improvement is the number of changeups being thrown in the zone, which has gone way up since 2016. 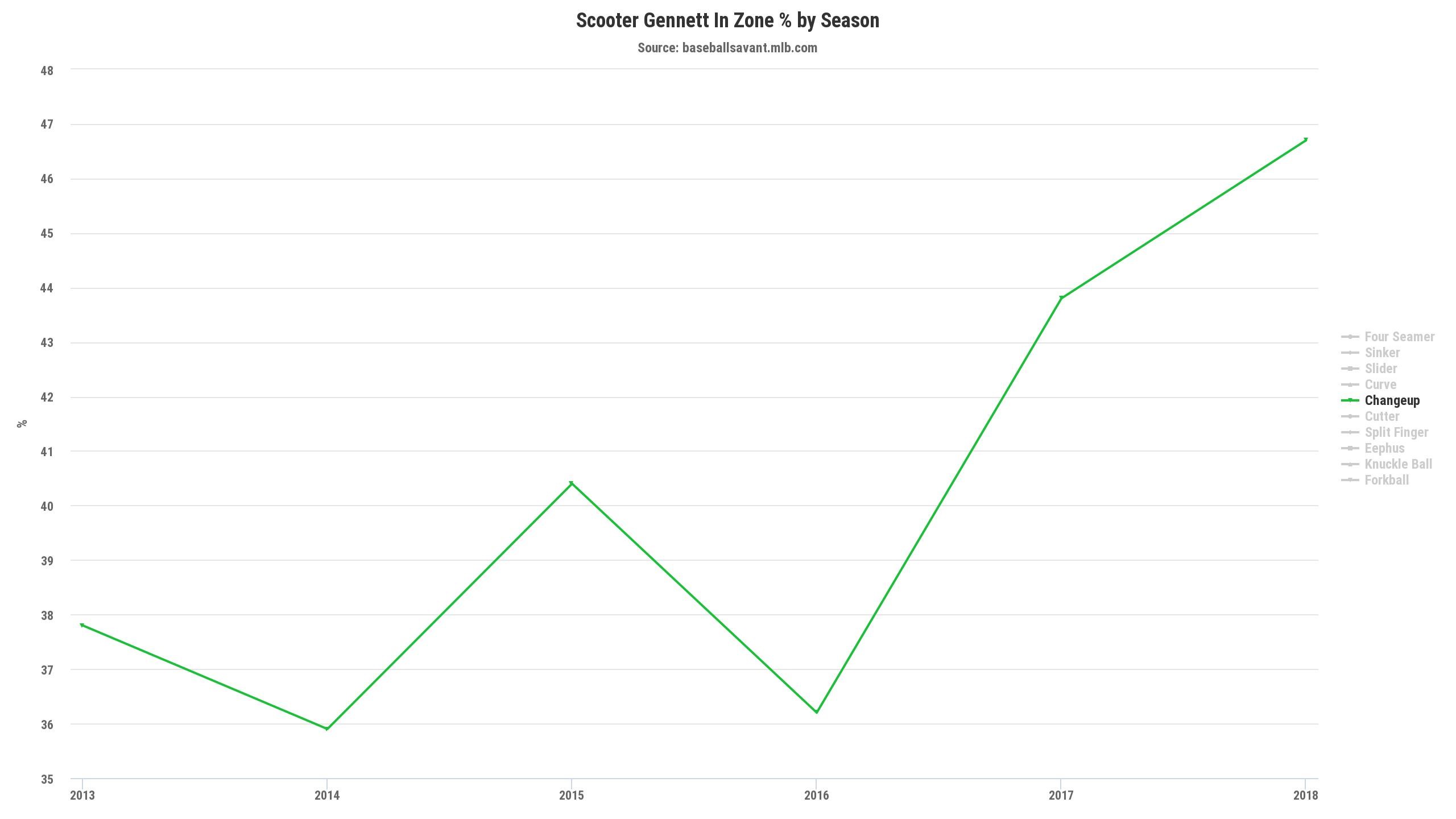 This is allowing Scooter to hit the ball harder while also dramatically reducing swinging strikes. The result is grand-slam smashing, All-Star Scooter Gennett, who is in the midst of another strong campaign.