In addition to my recent proclivity for Hawaiian shirts, I’ve also taken a fancy to obscure Minor League baseball jerseys. I mention this solely because scrolling through pages and pages of eBay auctions looking for the perfect blend of absurdity and savvy design has reminded how beautiful the sport of Minor League baseball is. You have cheap tickets, cheap concessions, and cheap gimmicks. It’s simple baseball, good but not great quality of play but perfect for a Tuesday evening out.

Enter the Cleveland Indians. By and large, the Indians are the antithesis of what makes Minor League culture beautiful. They have an awful name. (Can we just change it back to the Spiders? How cool would the return of the Cleveland Spiders be?) Their jersey is sad, uninspired design. And they make fans pay Major League prices to watch them! (To be fair, they can’t really help this.)

But there is one thing that the Indians share with most Minor League teams: For every one player on the team worth his salt, there’s five more scrubs who are just names to fill white space on a lineup card. With two Cy Young contenders, an MVP contender and another guy who will get votes, the Indians have as stacked of a roster as anybody in MLB. They’ll easily cruise into the playoffs thanks to the AL Central, but their game plan got me wondering….could the Reds do the same?

With bona fide superstars Eugenio Suarez and Joey Votto already on the roster, I figure the Reds could maybe sign another big name and ride out their various levels of talent elsewhere to make the playoffs. It’s a big if, but conceptually there’s reason to believe the Reds could do it.

To establish the feasibility of the Reds riding a Stars and Scrubs mindset into the 2019 postseason, we first need to find one little ratio. How many stars do you need to offset the scrubs?

As you can see, there’s a decent gulf between a Star and Scrub, into which most MLB regulars fall. These are players that contribute to the team but won’t break the bank on the free agent market. They’re not expendable but not untouchable either. The Indians have exactly four of these players.

Four stars, two contributors, two super Scrubs, and 17 names I’ve already forgotten make a playoff team apparently. So what do the Reds have?

And yet, Votto could return to his usual MVP level making two Stars. The Reds could sign a frontline starter making three Stars. And the various contributors and super Scrubs could up their play enough to compensate for the one fewer Star than the Indians. But by that point, it’s not even a Stars and Scrubs mindset, just a normal, balanced ballclub.

The feasibility of the Reds Stars and Scrubsing their way to the playoffs next year is nil. The Indians lineup has Stars of the highest magnitude, whereas the Reds’ Stars don’t quite burn as bright. This isn’t to say the Reds are bound to miss the postseason next year. It’s just to say relying on Suarez and Votto won’t get the job done.

Prospect to Watch:Ã‚Â People tend to overlook Marlins’ prospects because frankly, they’re bad, but Nick Neidert could be the exception. He has a 2.95 ERA across 21 starts in AA and is striking out 9.43 batters per 9.0 innings. He’s not a power pitcher by any means so his ceiling is probably a No. 3 starter, but for fantasy purposes, he could be worth a stash. The Marlins are a dumpster fire after all, so he’ll get his shot sooner than later.

The slow climb to 100,000 continues for Author Views. I would appreciate it if you also check out my column from yesterday about Reds’ 2019 Trade Value and encourage you to argue with me in the comments. Be warned though, you better come with good reasons and numbers because I do not yield easily. 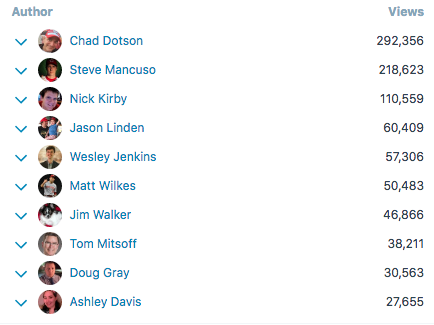