The MLB trade deadline was twenty-four hours off and rumors were thick like FionaÃ¢â‚¬â„¢s skin; this required responsible and serious sports columnists to carefully and constantly monitor unfolding player movements, analyzing cross-league action and quickly researching new personnel. Therefore, I wandered around a giant cave all day.

Although practically raised in National Parks, I have never undertaken the time-honored Tri-State tradition of getting peed on by Mammoth Cave. And so Josh The Pilot and I descended two hundred feet below the surface of the Earth, where we learned many things, such as the fact that the woman walking behind us for four hours had very strong opinions about how she planned to highlight her hair.

We learned other object lessons in the cave as well, all of them, as you might expect, pertaining to baseball.

This wasnÃ¢â‚¬â„¢t in any way news to me, but IÃ¢â‚¬â„¢m often amazed at how this information re-presents itself in new and increasingly staggering ways. Despite constant and friendly warnings from rangers to never touch any part of the walls or formations, several people assumed that they were endowed by their creator with the certain unalienable right to pet the cave.

When cave-petters go to the ballgame, they sit in the dead center of a row and canÃ¢â‚¬â„¢t contain their raging desire for a $17.50 bag of peanuts between batters. Votto is up? Too bad. You knew he was coming. Plan ahead. HeÃ¢â‚¬â„¢s going to be there for a while. Bring provisions.

2) Holes in the Ground Can Be Sparkly

The injury-besieged Reds are, as I type, eleventy billion games under 500, and now to make things worse the Bengals are starting. We could wallow in our constant slow-motion destruction, or we could pause for a moment as we make our way through this giant hole in the ground. Gypsum sparkles in a well-aimed flashlight beam; Eugenio Suarez writes his name on the outer fences next to Bench, Griffey Jr, and Kluszewski.

The shimmers are there if you pause to look for them.

What was supposed to be a four-hour tour became rushed at rest-and-ranger-talk points because, in passages barely wider than a KitKat, people were halting a single-file line to aim their phones at a point in the blackness, assuming Instagram brilliance but actually accomplishing high-quality photos of all the darkness five feet in front of them. In the meantime, they missed the gypsum.

As we found the parking lot, a member of our tour, who I very much wanted to hug, railed at the concrete concerning the shutter addicts: Ã¢â‚¬Å“YouÃ¢â‚¬â„¢re taking a hundred pictures of the dark youÃ¢â‚¬â„¢re never going to look at again. Stop stopping me with your stupid.Ã¢â‚¬Â

Look, this is my history minor life. IÃ¢â‚¬â„¢m typing this in Colorado right now. This is my office view. 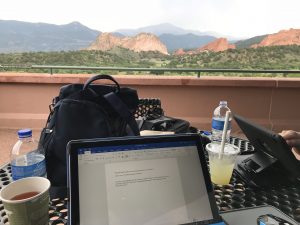 Every time I look up, the slant of the sun, the swoop of the clouds, and the hue of the rocks are different. 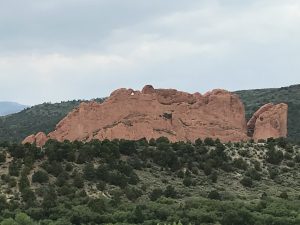 So you know what I do? Right. I take pictures of it. 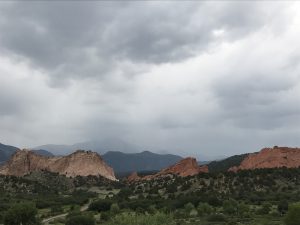 I take pictures of it because I want to carry this home with me in my computer bag and this is the closest I can come. I can understand the instinct to push the big round button at the bottom of the phone the instant something remotely memorable comes into view.

This is not generational. This is instinctual. The man in the Mammoth Cave parking lot was younger than I am. As I walked through a gift shop en route to my table here, a woman picked up a book from a spirituality display and read the title aloud.

Ã¢â‚¬Å“A Thousand and One Ways to Live in the Moment,Ã¢â‚¬Â she said, fanning through the contents.

The balanceÃ¢â‚¬â€one I am still working onÃ¢â‚¬â€is knowing when to preserve, and when to live what weÃ¢â‚¬â„¢re trying to trap under rectangular glass. I see this at the ballpark constantly: Heads down, selfies, scrolling through StatCast, live-tweeting each pitch, everything but watching the sudden drop of the pitch and the clean sweep of the swing. YouÃ¢â‚¬â„¢ll see the part of my hair before you see the rest of me in the seats, tooÃ¢â‚¬â€every single publisher and agent wants to see your social media platform before a single sentence youÃ¢â‚¬â„¢ve typed–but IÃ¢â‚¬â„¢m working on it.

Untether. Unflood. Post a photo of the sun setting over the river and then return to the vital business of watching Billy Hamilton shift his weight back and forth for twenty minutes.

One of the mothers behind me in the cave was chiding her teenager for not taking pictures of total darkness.

And both she and the kid were missing the fields of sparkling gypsum above.

The most difficult part of traversing the back area of the cave, a good five miles from the historic section that most tourists see, was not working our way up and down steep slopes of rock covered by a light dusting of dirt and bat poop. It was strategic placement of ourselves so as to avoid the most obnoxious members of our tour group.

If we stayed too close to the front, we were treated to the somewhat atmospheric-destroying Shoes That Light Up and Flash Kid. Stuck single file in a narrow passageway, we were subjected to half an hour of walking through Studio 54 in the wake of this child. Like the Woodland Indians before us, the way was lit by torches, intuition, and strobing LEDs.

We found a happy medium, after a couple of hours, where we continued our day as Unending Highly Specific Questions For the Ranger Couple (Ã¢â‚¬Å“When you said Ã¢â‚¬Ëœlimestone,Ã¢â‚¬â„¢ are you referring to bituminous limestone or caboniferous limestone?Ã¢â‚¬Â Ã¢â‚¬Å“But which part of the Proterozoic Era?Ã¢â‚¬Â)

The constant shifting between annoyances reminded me of the constant cleansing my social media feed undergoes. No politics. No front-office bashers. No front-office apologizers. No Eeyores. No Pollyannas. No one who ever refers to Riverfront as Cinergy Field in any serious capacity. Hagiography and unending gloom have no place in baseball. It is a sport of both shouting drunks and handing over the bobblehead to the crying little kid who didnÃ¢â‚¬â„¢t get to the park early enough. It is authentic. It is us; and as it is us, itÃ¢â‚¬â„¢s played right down the middle.

The genesis of my familyÃ¢â‚¬â„¢s affection for baseball lies with my grandfather, who played himself, who tracked each box score, who was born when Palace of the Fans still stood and died just before ground broke at GABP, and who turned off the broadcast the second the game looked hopeless.

Ã¢â‚¬Å“Look at that. Gonna blow this and lose the next three, too,Ã¢â‚¬Â he said during Game Four of the 1990 World Series, watching Carney Lansford send home Willie McGee in the first.

Perhaps this is a function of being German, or, most likely, utter despair at seeing my attempt at athletics. But I inherited this lamentable trait; once I turned on the car radio exactly enough to hear Jeff Brantley say, Ã¢â‚¬Å“And hereÃ¢â‚¬â„¢s Yadier Molina, with no place to put him.Ã¢â‚¬Â Country music it is.

This means, of course, I miss a great many miraculous late-inning heroics, but my HSP tendencies propel me to run screaming from any uncomfortable, depressing, awkward, upsetting situation conceivable, which, as you can imagine as a Reds fan, makes for rather a lot of country music.

I doubt. I doubted and fretted a great deal over our cave tour, which wound for hours and advertised Ã¢â‚¬Å“two brief bathroom breaks.Ã¢â‚¬Â What did that mean? Did the NPS somehow lower PortaPotties into the cave, or would I have to squat behind a stalagmite, or what?

You know whatÃ¢â‚¬â„¢s down there? A fully armed and operational bathroom, anchored right into the rock. 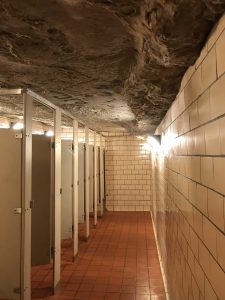 Hand dryers and everything.

I donÃ¢â‚¬â„¢t know how it got there, but IÃ¢â‚¬â„¢m mightily pleased it did. What a joy, and what an utter waste of fretting.

If we can flush deep below the planet, the rebuild can also end.