The Reds were swept by the Phillies on April 9-11. Since then, they are now 14-7 against first place teams (6-5 vs the Cubs, 2-1 vs the Indians, 4-0 vs the Dodgers, and 2-1 vs the Phillies). The Reds are not there yet, but they certainly have the feel of a team that could be competitive with a couple more pieces in 2019.

Matt Harvey made what will in all likelihood will be his final start in a Cincinnati Reds uniform. Harvey pitched five solid innings before being lifted for a pinch-hitter in a bases loaded situation. Joey Votto reached base four times leading the Reds offense. The Reds bullpen continued to pitch well, covering four scoreless innings. The Reds also got big double plays in the both the 7th and 8th innings. 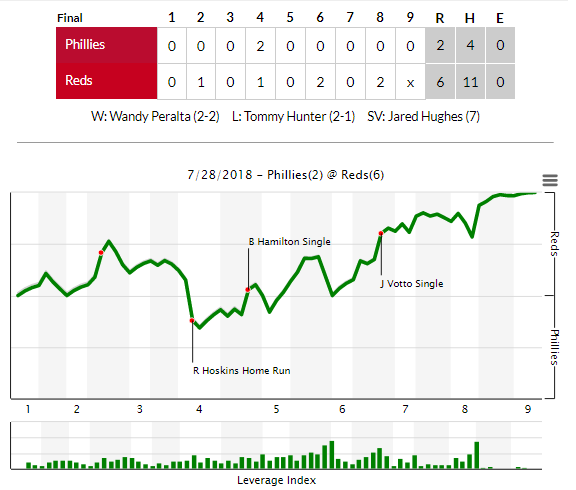 According to FangraphsÃ‚Â WPA statisticÃ‚Â (winning percentage added), the most important play of the game wasÃ‚Â Joey Votto’s RBI single with 1 out in the 6th inning, giving the Reds a 3-2 lead (moving Gennett to third base)Ã‚Â That play increased the Reds chances of winning by 12.7% (from 67.5% to 80.2%). 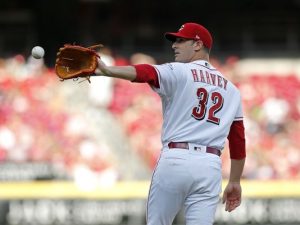 Matt HarveyÃ‚Â did nothing on Saturday evening to hurt his trade value. Harvey got lifted for pinch hitter after 5 innings of work: 5.0 IP, 2 H, 2 R, 2 BB, 5 K. It has been fun to watch Harvey pitch for the Reds. He certainly brought some excitement to a team that was absolutely dead when he arrived. The tweet below just might have some team overpay for Harvey thinking he could be the lottery ticket that wins them a World Series.

The last time Harvey got multiple swinging strikes on 97+ mph fastballs was Game 5 of the 2015 World Series.

Joey VottoÃ‚Â had 3 hits and a walk. He drove in the go-ahead run in the 6th inning, and an insurance run in the 8th.

Wandy PeraltaÃ‚Â had a terrific return to the Reds bullpen: 1.1 IP, 1 H, 0 R, 0 BB, 1 K. It was nice to see Peralta not walk anyone. He was terrible when he was with the Reds through June, walking 25 batters in 29.1 innings. Peralta didn’t start out better in Louisville when he was sent down, but he didn’t walk anyone in his last 4 appearances (5.0 IP).

Sal RomanoÃ‚Â made his second relief appearance of the season, and he retired both batters he faced.Ã‚Â Amir GarrettÃ‚Â also pitched tonight, so him being pulled last night after covering the bag was purely cautionary.

Jim Riggleman‘s bunt obsession reached a new low tonight. He had the #5 hitter lay down a sacrifice bunt in a tie game in the 5th inning. The result of course was 0 runs were scored. I actually like Riggleman much more than I ever thought I would. I like his very professional but calm demeanor, and I especially like his quick hook to the bullpen and not pushing starters (all data shows starters are worse the 3rd and 4th times through the order). That said, I’ll never be able to support a manager who goes against proven data. It’s like a political hot button.

Eugenio SuarezÃ‚Â streak of five consecutive games with a home run came to end. He stinks. 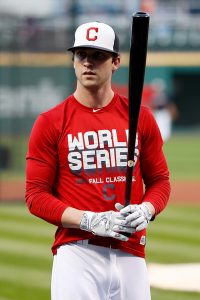 There is a report that the Indians have “Billy Hamilton on their radar.” That could be an interesting trade partner for the Reds. The Indians just placed Tyler Naquin on the DL. Naquin is a player with great minor league numbers who finished 3rd in the AL ROY vote in 2016. Naquin is not in good graces with the Indians from what I have heard living up here in Cleveland. It sounds like they don’t like his work ethic, personality, etc. He can really hit though, and can play CF. He is not a great defensive CF, but you only need an adequate CF at GABP (see Shin-Soo Choo’s 6-win season in 2013).

Scoreboard watching: the Diamondbacks are currently in a 4-4 tie. If they lose, the Reds would be single digits back for the second wild-card spot. We can dream.