Eugenio Suarez continued his NL MVP campaign tour with a home run for a fifth consecutive game. The Reds bullpen was dominant again, pitching 4.2 innings without allowing an earned run in route to a 6-4 win. However, it was new Red, Mason Williams who had the big statement of this game. He hit a three-run home run which proved to be the difference. 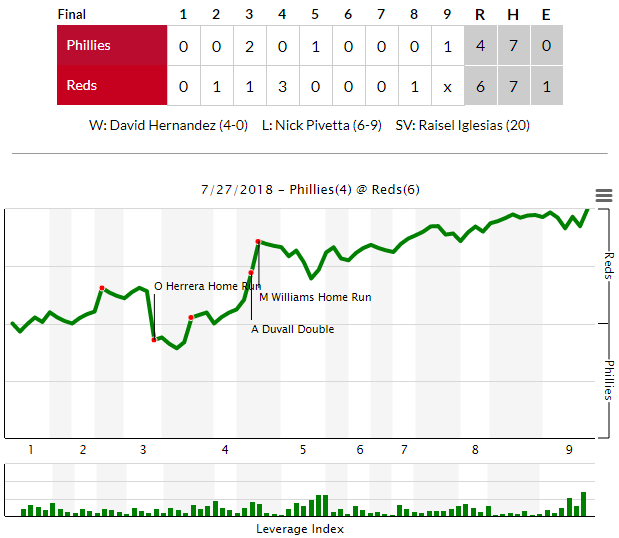 According to FangraphsÃ‚Â WPA statisticÃ‚Â (winning percentage added), the most important play of the game wasÃ‚Â Mason Williams’ 3-run home run with 0 outs in the 4th inning, giving the Reds a 5-2 lead.Ã‚Â That play increased the Reds chances of winning by 13.6% (from 72.2% to 85.8%).

Eugenio Suarez homered for a 5th consecutive game! This guy is just incredible. 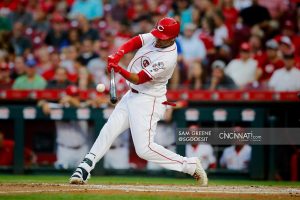 Mason WIlliamsÃ‚Â got his first start as a Red, and he had the biggest hit of the night. Williams drilled a 3-run bomb into the sun-moon deck. Williams came up with the Yankees. He was a 4th round draft pick in 2010, and in 2014 was a top 100 prospect.

David HernandezÃ‚Â pitched 2.1 perfect innings of relief, striking out 2. He now has aÃ‚Â 1.83 ERA/3.09 FIP. The Reds signing him this off-season to a 2-year, $5 million deal is looking very good.

How good were the Reds off-season signings?

Every Reds starting position player had a hit, except for Joey Votto. He of course walked twice.

The Reds botched a rundown play in the first inning. 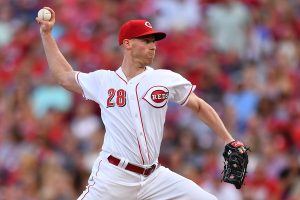 Anthony DeSclafaniÃ‚Â got off to an incredible start, striking out 5 batters through the first two innings. However, Disco couldn’t make it out of the 5th inning as the aggressive Jim Riggleman pulled him when he got in trouble despite only throwing 87 pitches. 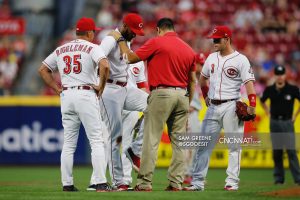 Amir GarrettÃ‚Â got hurt trying to cover first base. It looks like a lower leg injury.

Jose PerazaÃ‚Â had a pretty bad error in the 9th inning. He bobbled what should have been a simple game ending double play. Instead, it brought the tying run to the plate.

The Phillies decided to intentionally walk Joey Votto to load the bases with 2 outs. I had a crazy thought come through my head…was that the right decision? It is pretty crazy what Eugenio Suarez is doing that I am questioning that.