Recently, I’ve developed an affinity for wearing Hawaiian shirts. With no hint of exaggeration or hyperbole, my free time activity of choice has become browsing Goodwill or other thrift stores for absurd, flowery torso wear. This shift Ã¢â‚¬â€ my entire life before this summer has consisted of earth tones Ã¢â‚¬â€ has derived of a combination of three factors:

“What does any of this have to do with the Reds?” you ask. Well, humor me for one more paragraph.

The most dramatic part of my dramatically changing life is The Move, from St. Louis to Chicago. To be frank, the two cities aren’t that different. St. Louis is a little sleepier and Chicago can get colder, but largely they house the same types of people with the same things to do. For me, The Move really boils down to four and half hours up I-55 because I’ll still have the same number of Reds’ games to catch every year.

My point is this: Change, no matter how insignificant, is scary and prompts irrational reactions in all of us. Which is why every year when the trade deadline rolls around I cannot even fathom how baseball players can stand to hear their names in trade rumors with next-to-no input on where their change will take them.

I’ll never understand that particular horror, but all of my thinking about change and moving and being forced to only watch Reds’ away games for half a decade has made me wonder: Can we quantify how easy or hard it will be for the average fan to adjust to their team trading a player?

So welcome to The Trade Palatability Index (TPI), or in other words, why we just can’t let Scooter Gennett go.

So a player’s TPI becomes a value 0-20 with 0 being the fan’s literally do not care, why haven’t we traded this guy to 20 being lifelong emotional distress.

Player’s attachment to the city

Seeing this, you probably think, “Oh well that’s easy, hometown hero, easy 10.” And, like, kind of. The Attachment Rating is definitely highly skewed if a player is a hometown hero but that’s not the entirety of it. Factors include longevity with the team, iconic moments with the team, and random intangibles like being born there.

Ã¢â‚¬â€ Scooter Gennett (present): Hometown hero who grew up a Reds fan (3 for intangibles); A Red for 2 years (1 for longevity); 4-HR game and All-Star appearance (3 for iconic moments). Attachment Rating: 7

Ã¢â‚¬â€ Ken Griffey Jr. (traded 2008 deadline): Father played for Reds, grew up in Cincinnati, living legend (3 for intangibles); Played eight years as a Red but really was he ever not a Red at heart? (3 for longevity); Hit his 600th home run with the team, the Father’s Day homer (4 for iconic moments).Ã‚Â Attachment Rating: 10

Player’s ability to contribute in the future

Ã¢â‚¬â€ Scooter Gennett: Another year under contract for reasonable price (2); Leaving peak years but should still be productive (4); Blocking other potentially competent second basemen who could replace value (0); Could contend during current contract (1).Ã‚Â Future Contributions: 7

This final variable works backwards because it makes any trade more palatable. I remember how distraught I was when Junior was traded even though I completely understood the baseball reasoning behind the move. He was my favorite player being shipped off unceremoniously instead of finishing his distinguished career in his hometown. I couldn’t tell you a single player the Reds got back without Googling it, and that’s why the attractiveness of that trade’s return did nothing to help with its palatability. Ultimately, Attractiveness is made up of two parts: 1) do the returning players hold outsized value and 2) would an average fan recognize their name.

Ã¢â‚¬â€ Scooter Gennett: Return unknown but theorized as a single Top 100 prospect or pair of a team’s Top 10 or a single Top 10 with a couple of a team’s 11-30 prospects (-1 for value); In all likelihood, none of those names would be recognizable (0).Ã‚Â Attractiveness: -1

Ã¢â‚¬â€ Todd Frazier: For dealing Frazier, the Reds got Jose Peraza, Scott Schebler, and Brandon Dixon. At the time, the return was considered light though Peraza was highly-touted. Nowadays, the trade looks like a steal but this is an in the moment statistic (-1 for value); Maybe someone would recognize Peraza’s name, but I didn’t at the time and I live for prospect lists (0).Ã‚Â Attractiveness: -1

Ã¢â‚¬â€ Ken Griffey Jr.: The Reds got Nick Massett and Danny Richar in return for what was really a salary dump and a chance for Junior to get a ring. Nothing about this deal was attractive to the average fan as there was no value or name recognition coming back.Ã‚Â Attractiveness: 0

Ã¢â‚¬â€ Scooter Gennett, 13: Trading Scooter would definitely sting, but he doesn’t have the longevity as a Red or the irreplaceable value that would make a deal unconscionable.

Ã¢â‚¬â€ Todd Frazier, 12: Everyone kind of understood that Todd had to go and that the front office had waiting too long after his HR Derby win. Trading Todd was like putting down your 15-year-old dog. It hurt, but in a resigned sadness kind of way.

Ã¢â‚¬â€ Ken Griffey Jr., 11: If Junior hadn’t been 38 and clinging to an MLB roster spot, this trade would’ve been downright cruel. But again, it needed to be done and elicited a lot of the same losing-a-dog emotions.

Something to note here about all three of my examples registering around the same TPI is that these are the deals that hurt a lot but are ultimately good baseball decisions. Trading Matt Harvey would register a 0 because he has no connection to the city, his contract rules out future contributions, and a return will be almost negligible. It’s the trading Manny Machado in his prime that’s going to break the 15 point threshold because wow, that one must have hurt for Orioles fans.

I say this to recalibrate how you think about TPI. Each point above 10 is infinitely more emotionally scarring than a 0-10 ranking could ever bring. So yeah, trading Scooter is going to suck because despite his short Reds’ career, we’ve become so deeply invested in him. But it wouldn’t be tragedy without a purpose, as horrible as that might sound right now. It would just be a move from St. Louis to Chicago. A little bit different and definitely hard to wrap your mind around, but there will be new experiences and players to love right around the corner.

Prospect to Watch:Ã‚Â If you haven’t already stashed Justus Sheffield in your dynasty league, do so right now. Like right now, right now. With the Yankees picking up J.A. Happ, Sheffield likely won’t be with the big league club until 2019 but there’s an open rotation spot waiting for him when Happ leaves. Sheff has a 2.44 ERA and 8.62 K/9 at AAA this year, showing he’s got big league stuff. His BB% is still a bit high, but expect him to get opportunities to prove himself down the stretch.

In the standings of authorial views, I have fallen behind Jason Linden but increased the gap between myself and Matt Wilkes. It’s a nice little tradeoff in my opinion. While the competition still rages, I am going to take this Rain Delay to set a new goal for myself: 100,000 views on the season. Is it possible? IDK, you all read this drivel for some reason, but I sure hope so. Also, check out my latest for The Hardball Times, it’s a fun little read. 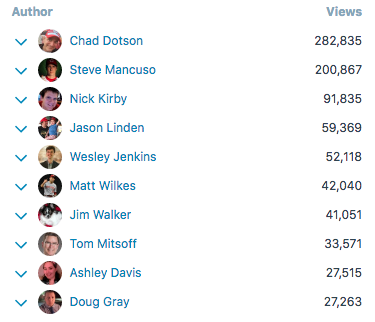