The Reds proved to be very hospitable to the Philadelphia Phillies in the first game of a four game series at Great American Ballpark. Reds pitchers allowed seven home runs to the Phillies on Thursday evening, tying both the Phillies team record, and the Reds record for home runs allowed. Tyler Mahle could not record an out in the second inning, continuing the worst stretch of starts in his big league career. Eugenio Suarez did extend his streak of games with a home run to four, but it was not nearly enough to overcome the power bats of the NL East leading Phillies. 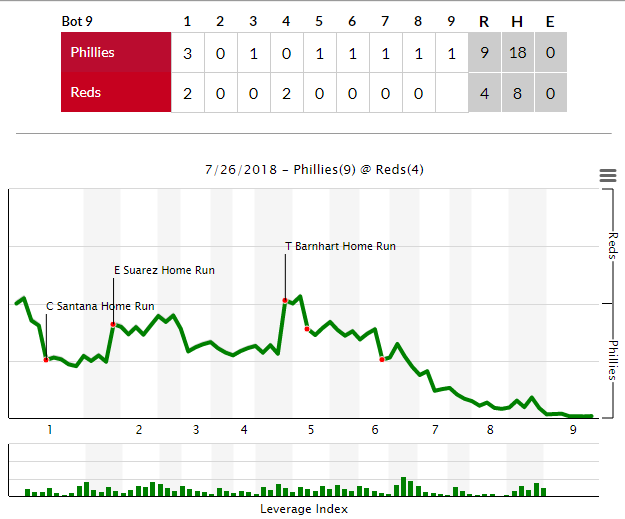 According to FangraphsÃ‚Â WPA statisticÃ‚Â (winning percentage added), the most important play of the game wasÃ‚Â Tucker Barnhart’s 2-run HR with 2 outs in the 4th inning, tying the game at 4Ã‚Â That play increased the Reds chances of winning by 23.3% (from 28.1% to 51.4%). 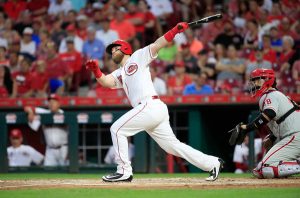 Tucker BarnhartÃ‚Â hit his 7th home run of the season, a 2-run shot in the 4th inning. It tied the game at 4 at the time. 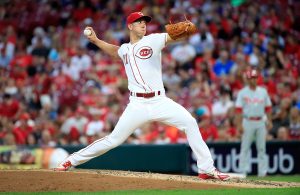 Michael LorenzenÃ‚Â was not immune to giving the home run ball tonight, but he did only allow 2 runs in 4.0 innings. His effort surely saved the bullpen.

Think of how valuable Michael Lorenzen could be in a playoff game. He could pitch 3 inning with ease, you wouldn’t absolutely have to pinch hit for him. I can dream. 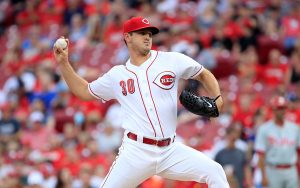 Tyler MahleÃ‚Â threw 45 pitches in the first inning, and got pulled before recording an out in the second inning. It has been a very rough stretch for Mahle over his last 3 starts:Ã‚Â 9.0 IP, 14 ER, 20 H, 5 HR, 6 BB, 7 K, 14.00 ERA. Mahle has never thrown more than 150.2 IP in his professional career, and is now at 107.1 this season. You have to wonder if he is starting to get fatigued? The Reds might want to consider skipping him a start, especially with the temporary six man rotation.

Eugenio Suárez is the third @Reds player with a 4-game HR streak this year, joining Joey Votto and Scooter Gennett.

According to @EliasSports, the Reds are the fifth team in the Expansion Era (since 1961) to have three different players homer in four straight games in a season.

This is good all around. It’s so refreshing to see an ump without an ego. pic.twitter.com/eHKaWL6BzB